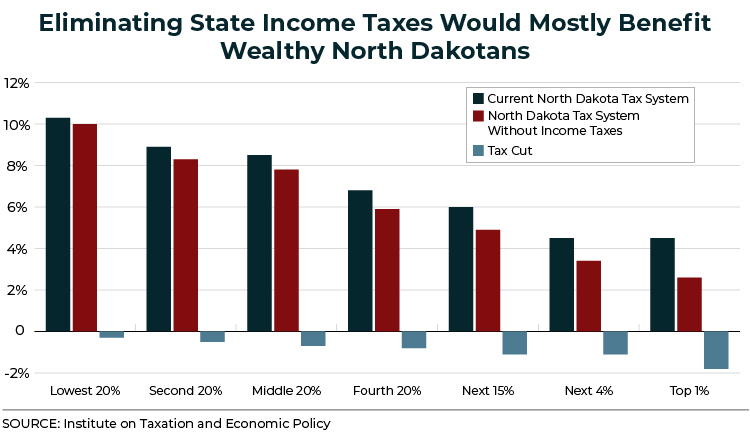 Lawmakers in Bismarck were treated last weekend to the largest single day of snowfall the city has ever seen. As state senators begin weighing a bill recently passed by the House that would replace the state’s income taxes with oil revenue, they might want to reflect on how similar oil revenue is to the snow: although both are in extreme abundance right now, both are volatile and unpredictable and will melt away sooner than later. Lawmakers should also consider how eliminating the state’s income taxes might warm the hearts of wealthier North Dakotans but would leave most North Dakota families out in the cold.

HB 1530, a bill being considered by the Senate Finance and Taxation Committee Tuesday, would use oil revenue in the state’s Legacy Fund to phase out personal and corporate income tax revenues. But just a quick look at this snowdrift-like graph of North Dakota oil revenue over time shows how unwise it is to count on this revenue to fund ongoing state priorities like educating children, keeping communities safe, and maintaining roads and bridges. After its rapid rise beginning around 2006 due to the fracking boom, oil revenue peaked in 2014 and fell 54 percent from 2014 to 2017. Basing a state revenue system on such a foundation is as unwise as building a home on a snowbank.

Building on top of snow would be even more ill-advised if the ground beneath the snow was also eroding, yet that is exactly what is happening to North Dakota’s tax system beneath the fracking windfall. Tax cuts passed in 2009, 2011, 2013, and 2015 cut the state’s personal income tax rates nearly in half, and lawmakers cut the corporate rate in each of those years as well as in 2003 and 2005.

Moreover, although research is clear that the benefits of slashing income taxes do not trickle down and produce economic growth, it is worth noting that North Dakota’s top income tax rate of 2.9 percent is now the lowest of all states with such taxes, and that rate only applies to income in excess of $433,200.

Finally, lawmakers should consider who this tax shift would benefit and who it would leave out in the cold. North Dakota’s tax system is already badly upside-down, charging effective rates on middle- and low-income families that are about double the rates for the top 5 percent. This makes the state’s tax system the 17th-most regressive of all states and the District of Columbia. Although they have been eroded in recent years as summarized above, the state’s income taxes have a significant progressive effect on the overall tax structure. As the below graph shows, eliminating these taxes gives the largest tax cuts to the rich while doing very little for lower-income families. This would vault the state to 8th-worst, placing it among the “Terrible Ten” most regressive tax systems in the country.

And once oil revenues melt away as the fracking boom tapers out and the world likely moves further toward renewable energy sources, lawmakers would have only highly regressive sales and excise taxes to raise to fill the gap without an income tax. This would ultimately amount to using a temporary oil tax windfall as collateral to pay for a permanent tax cut for the rich, to be paid back by hiking taxes on lower-and middle-income North Dakotans down the road.

North Dakota senators should note these chilling facts and put HB 1530 on ice for good.