Sen. Chuck Grassley, the chairman of the Senate Finance Committee, today has an op-ed defending Trump-GOP tax law. “One of the most-covered falsehoods being spread about tax reform,” as he calls the law, “is that it’s a middle-class tax hike.” He cites ITEP’s estimates to back up his point that most people in every income group have lower taxes because of the law.

As Sen. Grassley and his staff know full well, this leaves out the important point of our findings. It’s true that most people at every income level receive something from the Trump tax law. The problem is that lawmakers designed the law to shower most of its benefits on the well-off. That point is not controversial and, indeed, is not refuted by anything Grassley says.

Even this is not the full story about who benefits. The estimates I’ve just described only account for the tax cuts going to Americans. Another portion ultimately goes to foreign investors because they own stocks in American corporations that pay less under the new law. The same report estimated that foreign investors would reap $47 billion from the Trump tax law in 2018. In fact, foreign investors received a greater benefit from the Trump-GOP tax law than the lowest-income 60 percent of Americans, who received a total of just $41 billion in 2018.

Grassley claims that the law makes the tax code more progressive, a convoluted argument that is difficult to take seriously when his own statements leading up to the law’s passage demonstrate that a progressive tax code is not his goal at all. At one point he said, “I think not having the estate tax recognizes the people that are investing as opposed to those that are just spending every darn penny they have, whether it’s on booze or women or movies.” The estate tax at the time only affected those who left behind more than $5.5 million in assets, twice that amount for married couples. People with less than that apparently fell into the “booze, women or movies” category.

Sen. Grassley is not the only person who fails to grasp the problems with the law. Glenn Kessler, writing for the Washington Post’s Fact Checker column, dings Joe Biden for saying, “All of it [tax cuts] went to folks at the top and corporations.”

Biden was clearly wrong when he said “all” rather than “most.” But Kessler’s argument unravels when he writes, “any broad-based tax cut is going to mostly benefit the wealthy because they already pay a large share of income taxes.” As ITEP points out regularly, Americans pay all sorts of taxes, and the U.S. tax system as a whole is not nearly as progressive as you might think. We projected that this year the richest 1 percent would receive 21 percent of the nation’s total income and pay 24 percent of the nation’s total taxes. In other words, we have a tax system that is very mildly progressive. 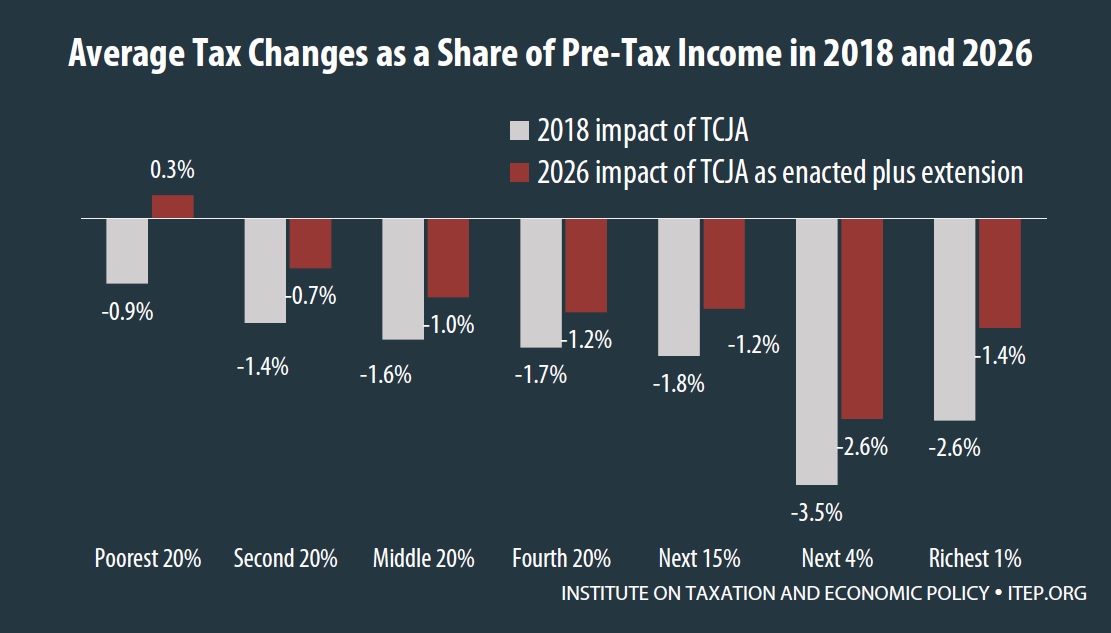 The bottom line is that no matter how you look at it, the Trump tax law is a regressive policy designed to help those who are already well-off. Yet, our public discourse is cluttered with arguments that miss that basic point.