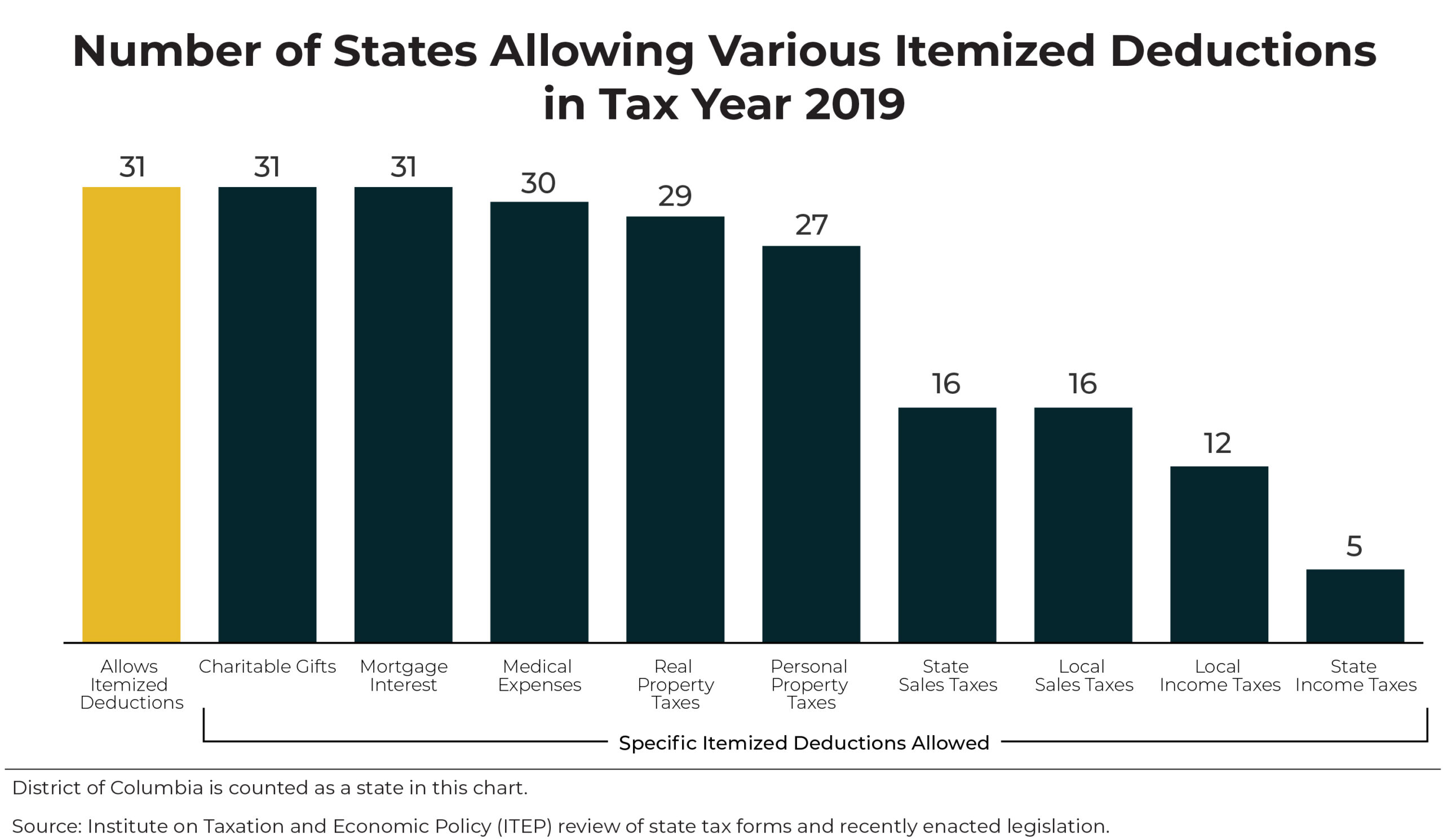 Itemized deductions are problematic tax subsidies that need to close. The mortgage interest deduction, for instance, is often lauded as a way to help middle-class families afford homes and charitable deductions are touted as incentivizing gifts to charitable organizations. But the dirty little secret is that itemized deductions primarily benefit higher-income households while largely failing to achieve their purported goals.

A new ITEP report examines state itemized deductions and helps lay the groundwork for a better way forward. The report provides extensive detail on current policy in every state, spotlights recent changes in state policy, and offers a variety of recommendations for reform.

Thirty states and the District of Columbia (D.C.) use itemized deductions to grant upper-income taxpayers a subsidy on their payments of mortgage interest, property taxes, charitable gifts, and certain other expenses. These top-heavy and inefficient subsidies leave states with far fewer resources to pay for the schools, parks, and safe streets that their residents need.

To illustrate some of the problems, the report provides new estimates of how Maryland’s policies affect families at different income levels and of different races and ethnicities. In Maryland, we estimate that more than two-thirds (69 percent) of state tax cuts associated with itemized deductions flow to just the top 20 percent of earners. These deductions contribute to the regressive overall impact of the state’s tax code.

Because state itemized deduction policies are usually based on federal law, those policies underwent several notable changes in the wake of the Tax Cuts and Jobs Act (TCJA) that was signed into law by President Trump in 2017. Some of those changes improved state policy while others did not.

Looking on the bright side, 19 of 29 states that offer a property tax deduction decided to cap that deduction at the same $10,000 level now set in federal law (most states do not offer a deduction for state income taxes paid so, unlike at the federal level, the state caps tend to apply primarily to property taxes). Similarly, 27 of 31 jurisdictions offering a mortgage interest deduction now specify that, for new mortgages, interest will only be deductible on debt up to $750,000 rather than the previous $1 million level. And Vermont stands out for using the TCJA as an opportunity to repeal itemized deductions entirely, though it did replace the charitable deduction with a smaller charitable tax credit.

But the TCJA also caused many states to take a worrisome step backward. Twenty of 22 states that used an itemized deduction phase-down known as “Pease,” after its congressional sponsor, lost that limitation because of repeal by the TCJA. Pease had been the most common way that states reined in the cost and top-heavy distribution of their itemized deductions. Only New York and Virginia acted to save the policy, though a handful of other states have their own phasedowns on the books administered separately from Pease. As recently as 2017, when Pease was widely used, two states lacked a broad itemized deduction limit. That count has since ballooned to 18 states, largely as a result of the TCJA.

State lawmakers have no shortage of options for addressing the multitude of problems with itemized deductions. Outright repeal is one appealing alternative, as Vermont demonstrated in 2018 and as Rhode Island achieved in 2010. At the other end of the spectrum is such low-hanging fruit as denying the mortgage interest deduction for second homes (usually vacation homes) or eliminating unnecessary or even nonsensical deductions such as those offered in return for paying state income or sales taxes.

The report also explores a reform that would place a floor on the charitable deduction to better target its benefits toward taxpayers making significant charitable gifts. As currently structured, taxpayers with very large incomes receive a nearly automatic deduction even when they give a vanishingly small portion of their incomes to charity. Middle-income taxpayers, by contrast, need to make much more significant financial sacrifices before they become eligible for the deduction. By using a floor (similar to what already exists under the medical expense deduction) requiring that only gifts in excess of a fixed percentage of income are deductible, the deduction’s cost to state budgets could be reduced while also lessening needless subsidization of small gifts by upper-income taxpayers that would have occurred even without the deduction in place.

Finally, more states should join the 12 states, plus the District of Columbia, that make use of broad limitations on itemized deduction in Tax Year 2019. The report provides significant detail on the six main approaches used in each of those states. Among those are policies that phase down or phase out several itemized deductions simultaneously, or that place a flat dollar cap on the amount of itemized deductions that can be claimed. Another promising approach, at least in states with graduated tax rate structures, is to convert itemized deductions into credits to curb the degree to which these policies offer larger tax cuts to taxpayers in higher tax brackets.

Without question, state itemized deductions are ripe for reform. They exacerbate the regressive impact of state and local taxes and significantly reduce state revenue. There is no shortage of successful reform efforts from which state lawmakers can learn. Whether 2020 will bring new success stories remains to be seen.