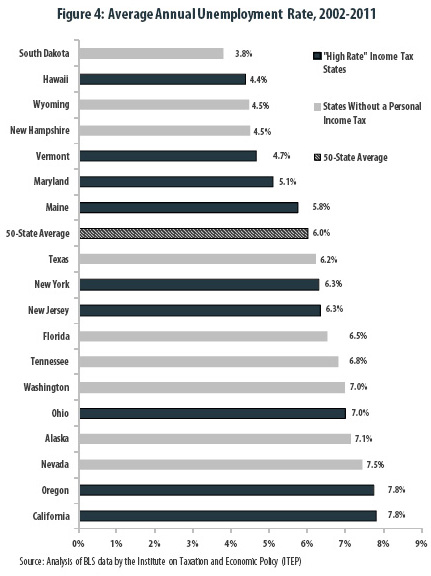 Lawmakers seeking to reduce or eliminate income and estate taxes frequently claim that doing so will result in an economic boom. Supply-side economist Arthur Laffer is often enlisted to bolster this argument with his analyses purporting to show that states lacking an income tax or estate tax have economies that outperform the rest of the country, and that any state can easily replicate that success by abandoning their income and estate taxes.

A series of reports from Institute on Taxation and Economic Policy explains why these supply side claims are not supported by the evidence, and exposes the many serious flaws in the analyses that Laffer has constructed to lend it support.

The newest report takes on the simplistic methodology and misleading measures of economic health that Laffer uses to claim that states without income taxes are outperforming “high rate” states. In fact, residents of those states with the highest top income tax rates are experiencing economic conditions at least as good, if not better, than those living in states lacking a personal income tax. A companion report reveals that a talking point Laffer created about job growth in states without income taxes is nothing more than a repackaging of the debunked “Texas Economic Miracle” argument. A report responding to an analysis Laffer did for a North Carolina-based group challenges his finding that the state could usher in an economic boom if it repeals its personal and corporate income taxes and replaces them primarily with a much larger sales tax. An earlier report breaks down Laffer’s false claim that eliminating the estate tax can lead to job creation. And another report spotlights the distorted variables Laffer includes in a regression analysis purporting to demonstrate economic growth benefits from income tax repeal.