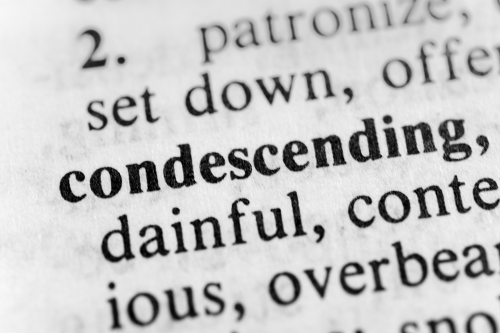 A couple weeks ago, a billionaire set the Internet ablaze when on 60 Minutes Australia he chided millennials to stop buying avocado toast and fancy coffee if they wanted to buy a home.

The backlash was swift and deserved. Twenty- and early thirty-something people rightly took offense to the suggestion that they haven’t purchased homes because of their highfalutin tastes and financial whimsy rather than by choice or due to structural challenges in the economy.

It isn’t a mental stretch to recognize hints of this haughty worldview—namely, that people who face any level of financial insecurity must have personal shortcomings—among U.S. lawmakers. Rep. Jason Chaffetz, for example, unrealistically asserted that lower-income people could afford higher premiums under the GOP health care proposal if they simply resisted spending hundreds of dollars on new iPhones (high-income people, by contrast, would face no such trade off as the plan would also slash taxes for the wealthy).

In a similar vein, the Trump Administration released a budget last week that cloaks ruthless cuts to domestic programs in politically loaded language about personal responsibility.

The budget proposes to bludgeon social service programs without regard to the devastating and adverse humanitarian effect of taking away food assistance, health care and disability insurance from vulnerable children and families. The plan also would shave subsidies to help lower-income people finance higher education and snatch the child tax credit from U.S. citizen children of undocumented immigrants. Under any condition, these unprecedented cuts would be unconscionable. But they are even more outrageous in the context of an overall agenda that Vice President Mike Pence described as including, “one of the largest tax cuts in American history.” The tax cuts are concentrated among corporations and the rich. It is no exaggeration to say that the Trump Administration’s tax and budget agenda would make life much harder for the poor and even more comfy for those already living comfortably.

To justify ruthless domestic program cuts, the administration’s budget declared its intent to reform “our welfare system” and encourage “able-bodied individuals who have become too dependent on government to work.” White House Budget Director Mick Mulvaney adhered to this misleading, overly simplistic messaging, declaring during a White House briefing, “If you are on food stamps and able-bodied, we need you to work.”

This spin isn’t new, of course. It’s consistent with a long-standing, right-wing philosophy that disingenuously contends opportunity for all is abundant, so if you are low-income and have to rely on assistance to put food on the table or to see a doctor, it must be due to personal shortcomings. HUD Secretary Ben Carson confirmed he aligns with this world view when two days after the budget release he said, “poverty is a state of mind.”

It is far easier to stereotype lower-income people than to take a step back and consider, for example, what health insurance really costs and how a 60-year-old with $26,500 in annual income could ever hope to afford $16,000 a year in health insurance premiums and still put a roof over his head and food on the table, even if he eschews avocado toast and decides not to purchase an iPhone.

Similarly, it is politically expedient to use loaded language about “able-bodied” people receiving food stamps than to ask tougher questions such as why one in seven people in this rich country need SNAP and many more qualify but don’t receive it, or why 32 percent of the population is either poor or low-income (household income that is 200 percent or less of the federal poverty threshold). Or why, at a time when corporations are plenty profitable, is real median household income at the same level as it was in 1999 when adjusted for inflation. Or why did the majority of gains from the recent economic recovery concentrate among the top 1 percent.

The fact is that millions of able-bodied people get up and go to work every day, and they help keep this nation’s economy moving. Yet far too many don’t earn enough to save up for a rainy day, let alone pay health insurance premiums if they don’t receive it as part of their work compensation.

But billionaires have funded research that seeks to debunk the very idea of poverty, arguing that low-income people in the United States have material possessions such as refrigerators and televisions and, thus, aren’t truly poor—and by extension maybe not so deserving. It’s not surprising, then, that a presidential administration filled with billionaires would release budget and tax proposals that dramatically reduce taxes for corporations and the wealthy while callously gutting social services and other programs that help people move out of poverty.

A month before his budget, President Trump released a tax sketch that is a massive giveaway to corporations and the wealthy. He proposes to slash the corporate tax rate to 15 percent. His plan to eliminate the estate tax would benefit the richest of the rich—the first $5.49 million in assets are exempt from the estate tax, leaving only a sliver of the wealthiest estates with any tax obligation. Trump also proposes to eliminate the alternative minimum tax and lower the top marginal rate to 35 percent from 39.6 percent. And we cannot ignore the fact that the GOP health care proposal is merely a façade for a $1 trillion tax cut for the wealthy.

The president’s budget and tax proposals may have been released a month apart, but they and his health care proposal are inextricably linked. Together, they paint a clear picture of a broader, anti-populist agenda to redistribute income upward. We are in a political environment in which tax cuts for the rich are a top priority while messaging around domestic spending casts aspersions on low-income people. This eugenics-like approach to public policy seeks to rig the system in favor of the haves while smugly declaring lower-income people should simply forego avocado toast or iPhones (or maybe central heat and televisions) and instead indefinitely continue to save to buy boot straps by which to eventually pull themselves up.

We should be better than this.