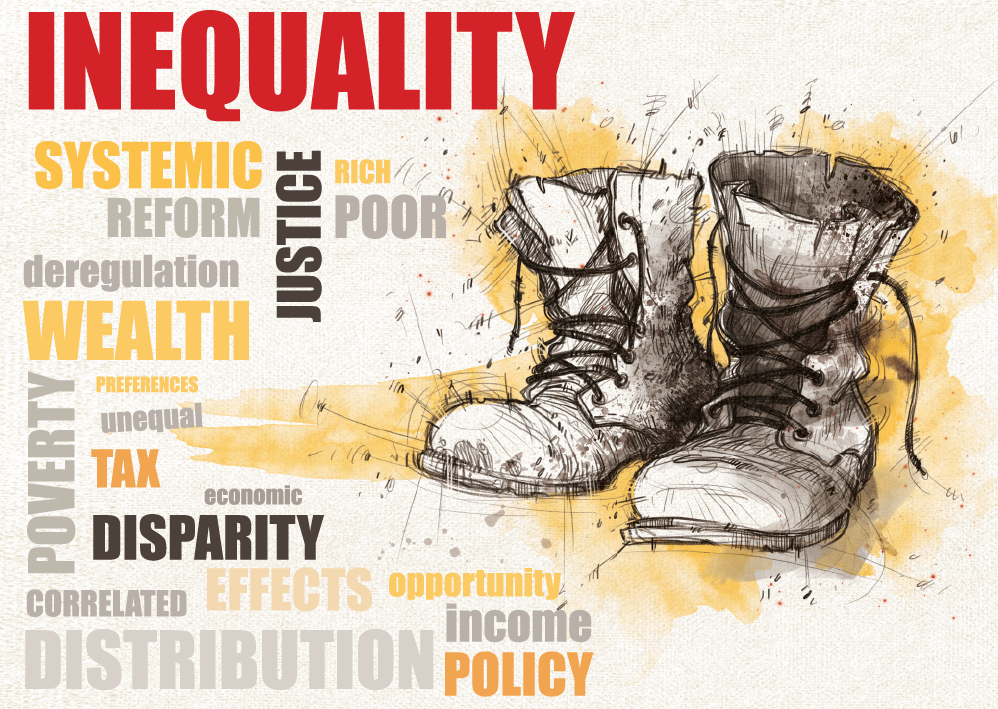 Policymakers and the public alike widely agree that economic inequality is the social policy problem of our age. It threatens the livelihoods of millions of children and adults, and it even threatens our democracy. Although some say Americans could fix it themselves by simply rolling up their sleeves, as a sub-headline in a March U.S. News and World Report column implies, the reality is different.

The column cites multiple bodies of research that correctly diagnose the problem. But it also suggests those concerned about the income divide could “shore up” their financial stability via employer-sponsored savings tools and “prioritize access to health insurance” to avoid medical debt. This woefully misguided idea that individuals can take on income inequality simply by saving more money for retirement, a medical emergency or a rainy day derives from the same school of thought that contends poverty is a state of mind or due to personal shortcomings.

The article’s point of view, unfortunately, isn’t exceptional. If root causes of poverty and the wealth divide are personal failings requiring individual actions, elected officials are free to shrug their shoulders or even push social policies that make inequality worse.

The latter is the Trump Administration’s approach. Last week, the White House issued a proposed regulation that could slow the rate at which the federal poverty threshold increases. If enacted, millions of people eventually could lose access to vital programs in which eligibility is determined based on household income. To be clear, the proposal would do nothing to ensure more children and families have the resources they need to achieve economic security, rather it would lower the poverty line over time so fewer people, on paper, are defined as poor.

It’s hardly a benign request. The filing admits changes “may affect eligibility for programs that use the poverty guidelines.” This proposal is a technocratic version of multiple, direct efforts by the White House to cut spending on social services programs or make it more difficult for people to maintain eligibility.

For example, in July 2018 the White House declared that the War on Poverty “is over and largely a success,” in a proposal predictably framed to re-enforce stereotypes about people receiving certain types of government assistance. It stated, “self-sufficiency has been declining in recent decades while material hardship has fallen….” And in its FY2018 budget proposal, the Trump Administration outlined its intent to reduce the deficit by curbing spending on a broad swath of programs it labeled as welfare (cash assistance, SNAP, Medicaid, SSI, housing assistance, etc.).

The choice of language is deliberate. Castigating low-income people for their economic condition and conjuring trite images of “able-bodied” people seeking handouts are some of the oldest tropes in the book, not to mention a distraction from the truth: Most adults receiving Medicaid live in a household where an adult works; more than 80 percent of adults receiving SNAP work in the year before or after receiving benefits; expanding Medicaid eligibility under the Affordable Care Act extended health coverage to millions of working people; federal spending allocated to cash assistance has declined in real dollars by 33.1 percent since 1996 and of the roughly 3.1  million people who receive it, two-thirds are children.

Poverty is not a problem because hordes of “able-bodied” people are waiting on handouts; rather, inequality is worsening because work is no longer enough. Real wages for low- and moderate-income families have remained stagnant for decades. This means asset-building strategies cheerfully recommended by U.S. News simply aren’t available to low-income families.

Imploring people with limited resources to try harder, work more, save more or “make better choices” is condescending, arrogant and tone deaf, not to mention the wrong approach to sound public policy.

Even as the administration continues its attempts to curb spending on programs that allow families to put food on the table, access housing, or secure health care coverage, it is presiding over a large, upward redistribution of wealth.

The 2017 Trump-GOP tax law provided a nominal across-the-board tax cut to all taxpayers but reserved the biggest cuts for the wealthy and corporations. The law further weakened the estate tax, allowing even more of the nation’s superrich families to pass on their wealth tax-free. It also dropped the top marginal income tax rate, giving the top 1 percent of households a bigger cut than any other income group. And by cutting the corporate tax rate by 40 percent (and the subsequent record-setting flurry of corporate stock buy backs), the law further lined the pockets of the very rich.

Such an upward transfer of the nation’s wealth is indefensible, but it is especially egregious given the 40-year trend of widening income inequality and a 10-year economic recovery in which the benefits have concentrated among the wealthiest households. That wages are relatively stagnant for the bulk of families and that four in 10 people do not have $400 to cover an emergency expense are problems that the administration ignored in its push for top-heavy tax cuts.

Now the administration proposes to further engineer our public policies to make it easier from a data perspective to ignore poverty.

In the context of a system built to advantage rich people over everyone else, it’s hard not to cringe at a personal finance article that advises individuals to address income inequality by saving more and buying health insurance. The nation has a gaping income divide partly because public policies have favored corporations’ desire to increase shareholder value at any cost, whether it is industry deregulation, decimating unions, or outsourcing government functions to profit-driven corporations. Individuals cannot fix these and other systemic challenges.

Also, bootstraps have never been an effective tool for addressing poverty or economic inequality. And they are doubly ineffective when the powers that be continually snip pieces of our straps and hand them over to the wealthy and powerful.