Capital Gains Tax Breaks Are Finally on the Defensive

One of the most glaring sources of unfairness in the federal tax code are rules that tax capital gains, which mostly go to the rich, less than wages and other types of income that most of us depend on. The capital gains tax breaks for decades have been comfortably ensconced behind trenches filled with special interests who would defend them until the end. But the end is now conceivable. Sen. Cory Booker and former Housing and Urban Development Secretary Julián Castro are leading the charge, and other Democratic presidential candidates and members of Congress are not far behind.

Most of the Democratic candidates have proposed to do away with special, lower income tax rates that apply to capital gains and stock dividends, at least for rich households who receive most of this type of income. ITEP recently estimated that the richest 1 percent receive 78 percent of the benefits of these special income tax rates. 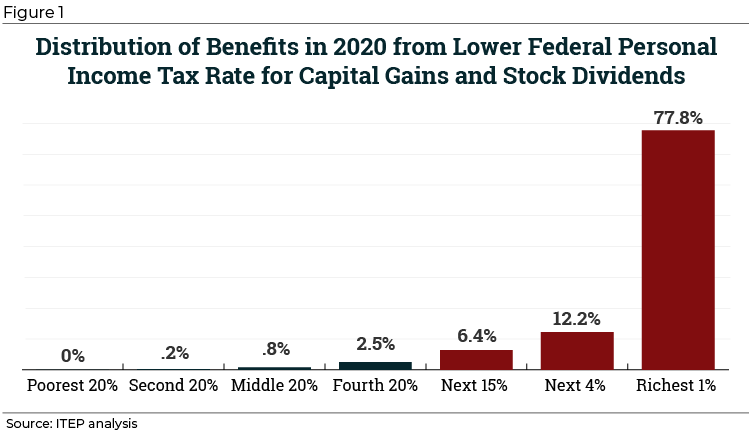 But eliminating this tax break is not enough. At least four candidates (former Vice President Joe Biden, Sen. Booker, Castro and Beto O’Rourke) propose to eliminate a second break for capital gains—the rule that exempts gains on assets left to heirs. If a newly elected president and Congress eliminate the first tax break, the special rates for capital gains, but leave in place the second tax break, for assets left to heirs, then many wealthy people would avoid the rate increase by holding onto their assets for the rest of their lives and leaving them to their children. Any real tax reform must do both.

But there is a third tax break for capital gains that is particularly complex— the deferral of income tax on gains until assets are sold. Sen. Booker and Castro propose a version of the reform laid out last week by the top Democrat on the Senate Finance Committee, Sen. Ron Wyden, to ensure that wealthy people pay income taxes on all their income (even gains on assets they have not sold) each year, just as working people pay income taxes on their wages each year. Sen. Booker and Castro propose “mark-to-market,” taxation, which Sen. Wyden calls “anti-deferral accounting.”

Under current rules, someone who sells an asset during their lifetime benefits enormously by deferring any income tax on the gains until they sell it. This seems like an arcane matter that only affects the timing of tax payments, but it is a hugely important benefit that allows the fortunes of the very wealthy to grow at a much greater rate over the years so long as they hold onto assets. For example, one tax expert estimated in 2015 that Warren Buffett, who at the time had a net worth of $70 billion, would still be incredibly rich but worth far less, $9.5 billion, if he had not been able to defer income tax on his “unrealized” capital gains throughout his life.

Technically, these proposals would apply true mark-to-market taxation only to tradable assets like stocks and bonds. Any increase in value of these assets from one year to the next is known and therefore can be taxed as income each year. (And any decrease in value could be deducted as a loss each year.)

For non-tradable assets, like ownership of a privately held business or a piece of real estate, the value is not easily known before the asset is sold. The proposals would allow taxpayers to continue to defer income tax on the gains until they sell a non-tradable asset but would increase the tax owed at that time to eliminate, or at least diminish, the benefit of deferral.

All versions of this reform would target the very rich. Booker’s version of mark-to-market taxation would exempt up to $2 million in unrealized capital gains over a person’s lifetime. Castro’s proposal says it would apply only to “the top 0.1 percent of asset holders.” Wyden’s paper spelling out his plan says it would apply to taxpayers who either have annual income exceeding $1 million or assets exceeding $10 million and who meet at least one of those criteria for three consecutive years.

These thresholds make sense because the wealthy can handle the more complicated rules and accounting involved. And don’t worry too much about how complex these proposals seem because the current rules probably create even more complexity by encouraging the wealthy to use convoluted schemes and loopholes (such as the carried interest loophole, to name just one) to exploit the various capital gains tax breaks.