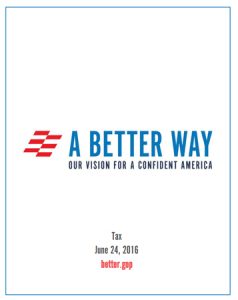 Members of Congress have floated fundamental changes to the tax code for years, but last week marked a ramping up of these efforts as Republican Speaker of the House Paul Ryan met with President-elect Donald Trump and his advisors to discuss how to move forward with tax reform in 2017.

Plans floated by the incoming administration and Trump would dramatically cut taxes for the wealthy and corporations and eliminate revenue necessary to meet the nation’s most basic priorities. In other words, if either the blueprint for Ryan or Trump’s plans (or some combination of both) becomes law, the outcome will likely be the furthest thing from true “reform” of our tax system.

In the last major successful federal tax reform effort in 1986, lawmakers stood by the principle that any tax reform legislation should be revenue and distributionally neutral. The basic idea was that these two principles would allow Democratic and Republican lawmakers to put aside their broader ideological disputes and focus on making the tax code more efficient in ways that everyone could agree on. This approach resulted in the 1986 tax reform legislation, which is rightly heralded as a major milestone in improving the tax code.

More recently, former House Ways and Means Chairman Dave Camp sought to replicate this approach with his proposal for comprehensive tax reform in 2014. While the plan ultimately fell short of fully achieving revenue and distributional neutrality over the long run, Camp’s proposal at least laid out a path that lawmakers could revisit if they wanted to replicate 1986 tax reform efforts.

Ryan and Trump’s tax reform proposals are in sharp contrast to these previous reform efforts. At the heart of their tax plans is a major cut in the top income tax rates for the wealthy and corporations. As an ITEP analysis of Ryan’s “A Better Way” tax plan shows, his plan would lose $4 trillion in tax revenue over a decade, with as much as 60 percent of the tax cuts going to the top 1 percent. Similarly, ITEP found that Trump’s revised tax plan would lose $4.8 trillion, with 44 percent of the tax cut going to the top 1 percent. Rather than attempting to stay revenue or distributionally neutral, Ryan and Trump’s tax plans are chiefly a huge tax cut for the wealthy and corporations.

But even if Ryan and Trump chose to meet the lofty standards of the 1986 tax reforms, it would not be sufficient given our current fiscal and economic state. After decades of tax cuts, our nation faces an $8.5 trillion deficit over the next 10 years. It’s a hard truth for politicians to swallow, but the nation needs to roll back these tax cuts to help lower the growing debt and to create fiscal space for public investments in things like healthcare and infrastructure. In addition, our nation is facing an increasingly economically unequal society. For the past several decades income inequality has grown, with the top 1 percent now capturing more than 20 percent of all income. Increasing taxes on the wealthy and corporations would help counteract this trend.

Recent polling indicates the overwhelming majority of Americans (regardless of how they voted) neither want tax cuts for corporations nor the wealthy. Ryan and Trump’s so-called “tax reform” plans go against the will of the broader public. Our nation’s elected officials need to change course on tax reform.