One of the thorniest problems in administering state corporate income taxes is how to distribute the profits of multi-state corporations among the states in which they operate. Ultimately, each corporation’s profits should be taxed in their entirety, but some corporations pay no tax at all on a portion of their profits. This problem has emerged, in part, due to recent state efforts to manipulate the “apportionment rules” that distribute such profits. This policy brief explains how apportionment rules work and assesses the effectiveness of special apportionment rules such as “single sales factor” as economic development tools.

Why Apportionment is Necessary

Most large corporations do business in more than one state and, as a result, are typically subject to the corporate income tax in multiple states. However, each state faces two important limits on how much of these corporations’ profits it can tax.

These limits exist for a good reason: if every state taxed all of the income of all corporations operating within the state’s borders, businesses could find their profits taxed multiple times. Indeed, when state corporate income taxes were first adopted, there were no agreed-upon rules for dividing corporate profits among states. As a result, some businesses found that nationally, more than 100 percent of their profits were subject to state taxes. In the 1950s, legal reformers worked to set up a fair, uniform way of allocating income among states that would result in multi-state businesses’ profits being taxed exactly once. The result was the Uniform Division of Income for Tax Purposes Act (UDITPA), a piece of model legislation that about half the states with a corporate income tax have adopted.

UDITPA recommends an apportionment rule that relies equally on three different factors in determining the share of a corporation’s profits that can be taxed by a state. These factors are:

The main rationale for using these three factors to determine taxable income is that it is impossible to determine with any accuracy the specific parts of a company that generate a given dollar of profit, let alone the states in which those parts may be located. These three factors are viewed as reasonable approximations of the share of a company’s profit that arises from doing business in a state, based on both the demand for company output in the state (the sales factor) and the production activity in which it engages in that state (the property and payroll factors), since profits are a function of both supply and demand. UDITPA’s recommendation was to assign each of these three factors an equal weight in distributing a company’s business income among the states in which it operates. If every state used the apportionment rule UDITPA recommends, it would be an important step towards ensuring that all corporate profits are subject to taxation.

However, over the past twenty years, many states have chosen to reduce the importance of the property and payroll factors and increase the importance of the sales factor. The majority of states now use apportionment formulas that give “double-weight” or greater to the sales factor. This means a corporation’s in-state sales are at least twice as important as each of the other factors. At the extreme, more than a dozen states now rely entirely on the sales factor (and therefore do not use the property or payroll factors at all) in determining at least some corporations’ tax liabilities. This approach is known as the “single sales factor” or SSF. 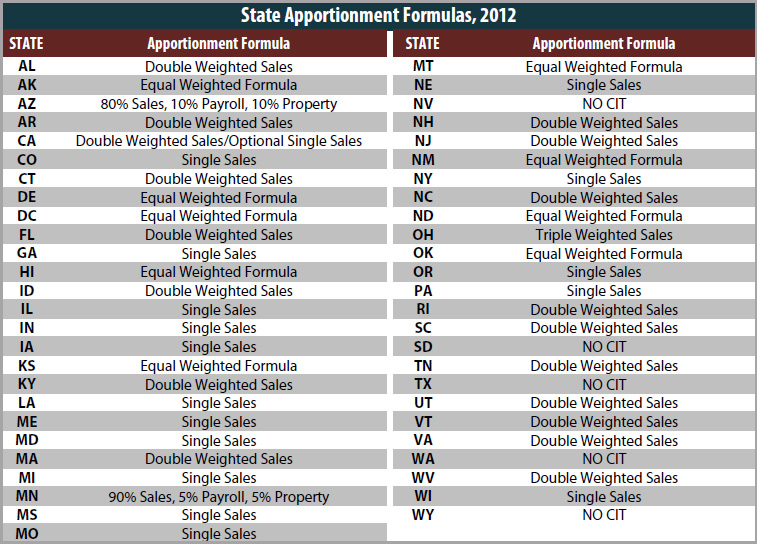 Advantages and Disadvantages of Increasing the Sales Factor

Single sales factor (SSF) is typically enacted for two reasons. First, it is argued that SSF makes a state a more attractive place for businesses to expand their property and payroll: if the property and payroll factors are ignored in calculating a state’s corporate tax, then a business can hire employees or build a plant in a state without incurring any additional corporate profits tax. Second, SSF is sometimes enacted in response to threats from companies that already have substantial in-state employment and property. For example, Massachusetts adopted SSF in response to threats from Raytheon that it would reduce its employment in the state unless it was adopted.

The use of SSF has created a lack of uniformity in corporate tax rules. As a result, corporations now face the same inequitable treatment that prompted the UDITPA rules sixty years ago: some multi-state businesses find their income taxed more than once, while others are not taxed at all. This inequitable treatment undermines the perceived legitimacy of the tax system by arbitrarily discriminating in favor of certain corporations and creates perverse tax incentives that can deter corporations from moving to, or remaining in, some states. Returning to a more uniform set of apportionment rules is an important first step in preventing widespread tax avoidance and ensuring that state corporate income taxes are applied fairly.