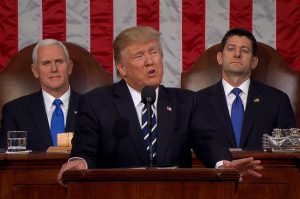 Despite some expectations that President Donald Trump would use his address to a joint session of Congress to lay out more details of his plan for tax legislation, the speech was extremely light on details. The few details mentioned were largely misleading or outright erroneous. Below we break down four tax-related statements from President Trump’s speech and lay out the full context of the issue discussed.

“Right now, American companies are taxed at one of the highest rates anywhere in the world. My economic team is developing historic tax reform that will reduce the tax rate on our companies so they can compete and thrive anywhere and with anyone.”

In his first statement on tax issues, President Trump claimed that American companies face the highest tax rates in the world. The reality is that while the United States does have one of the highest statutory rates in the world, the corporate tax code is so full of tax loopholes that most companies pay nowhere near the 35 percent top tax rate. In fact, an analysis of data from economically developed countries found that the overall U.S. corporate tax level is below average compared to our key economic competitors. Another study by the Institute on Taxation and Economic Policy (ITEP) and Citizens for Tax Justice found that profitable Fortune 500 companies paid an average tax rate of just 19.4 percent, just over half the statutory rate, with many major companies paying nothing in taxes at all.

“At the same time, we will provide massive tax relief for the middle class.”

Returning to a frequent campaign theme, President Trump claimed that his tax and other economic policies would benefit the middle class. The reality is that President Trump’s previously proposed tax plans would do nothing like this. The detailed plan he released on the campaign trail last fall would bestow 58 percent of its benefit to the wealthiest 5 percent of taxpayers. A more accurate description of his tax cut plan is that it would provide the wealthy and corporations with a massive tax cut, while giving a cursory tax cut to almost everyone else. Furthermore, millions of low- and middle-income families could see their taxes rise under his plan given its changes to the lowest income tax brackets and changes to head of household rules.

“It’s a basic principle that those seeking to enter a country ought to be able to support themselves financially. Yet in America we do not enforce this rule, straining the very public resources that our poorest citizens rely upon.”

“Currently, when we ship products out of America, many other countries make us pay very high tariffs and taxes, but when foreign companies ship their products into America, we charge them nothing or almost nothing.”

In one of the most muddled portions of the speech, President Trump made the case for some kind of border tax as retaliation against taxes he claims are unfairly placed on goods exported by the United States. Given his previous statements, one way to interpret it is that President Trump is continuing to wrongly argue that other countries discriminate against U.S. goods by applying their value added taxes (VATs) to U.S. goods. The problem with this statement is that VATs do not discriminate against U.S. goods because they apply equally to all goods imported or produced domestically in a given country. In addition, jurisdictions at the state and local level in the United States apply sales taxes in the exact same way, so under President Trump’s logic the U.S. already applies the same sort of tax onto foreign goods.

A second and potentially complementary way to interpret President Trump’s statement here is that he believes that U.S. goods face disproportionate tariffs throughout the world. The truth, however, is that the U.S. maintains a substantial schedule of tariffs against foreign products as well, meaning that any countries that apply tariffs to U.S. goods are certainly not doing so unilaterally.