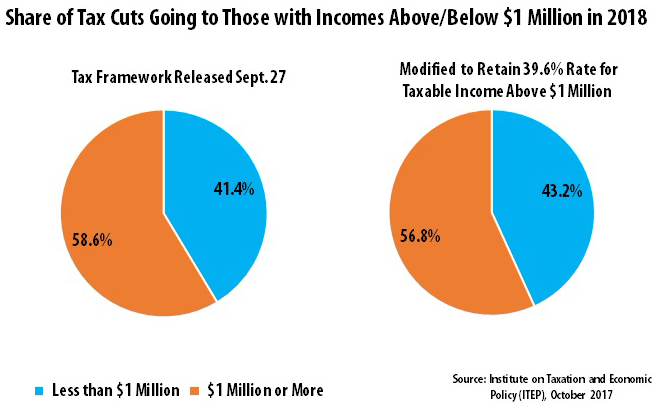 The Trump Administration and Republican leaders in Congress are debating how to address research showing that the “framework” for tax reform they released on Sept. 27 would mostly benefit the richest 1 percent of Americans, especially those whose income is more than $1 million annually. The framework would reduce the top personal income tax rate from 39.6 percent to 35 percent, but now  lawmakers are discussing keeping the top personal income tax rate at 39.6 percent for those with taxable income of more than $1 million. This modification would barely change the proposal’s overall impact.

And, those whose total income exceeds $1 million would continue to receive the majority of the tax cuts in 2018, as illustrated in the graph below. This super-high-income group makes up just 0.5 percent (half of one percent) of U.S. taxpayers but would receive most of the tax cuts regardless of this modification. 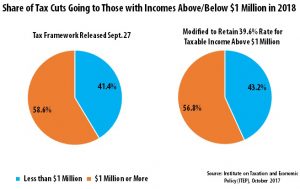 This proposed modification changes very little, mainly because there are so many other tax provisions in the framework that disproportionately benefit the wealthy, including a corporate tax reduction, a special, low tax rate for businesses that do not pay the corporate income tax, and repeal of the estate tax, among others. Another reason the modification changes little is that even those with taxable income exceeding $1 million would enjoy the lower tax rates that apply to their first $1 million of taxable income.

The modification would shave less than $8 billion off the costs of the framework in 2018, reducing the plan’s cost by just 3 percent.

Despite assurances from President Trump during his campaign and since he took office that his tax plan would not benefit the rich, the numbers say the opposite. The administration and Republican leaders in Congress certainly could drop the many parts of the plan that benefit the rich — but that has not even been discussed, and that certainly would not happen under this latest variation of their plan.