A 50-state analysis of the GOP tax framework reveals the top 1 percent of taxpayers would receive a substantial tax cut while middle- and upper-middle-income taxpayers in many states would pay more, the Institute on Taxation and Economic Policy said today.

The GOP continues to tout its tax plan as “beneficial to the middle class.” It is true that, on average, some taxpayers in all income groups would receive a tax cut. But for most income groups, the cuts add up to less than 1 percent of their income. The plan is a clear giveaway to the richest 1 percent of taxpayers who would receive more than two-thirds (67.4 percent) of the entire cut.

Further, state-by-state data show that many middle- and upper-middle-income taxpayers across the nation would see their tax bills rise. Nationally, one in six taxpayers (16.7 percent) would face a tax increase in 2018 under the GOP framework. In nine states and the District of Columbia, the share of taxpayers seeing tax increases would exceed one in five. Those states are California, Connecticut, Georgia, Maryland, Massachusetts, New Jersey, New York, Utah, and Virginia. 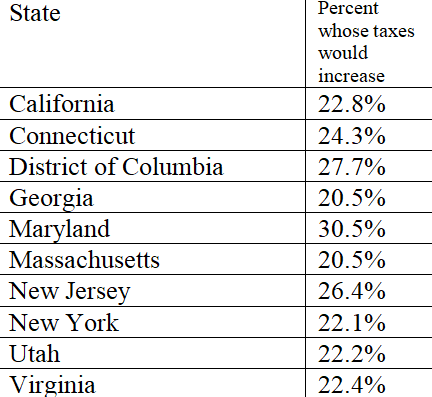 “No matter how the GOP messages this plan, it is nothing more than an upward redistribution of wealth,” said Alan Essig, executive director of the Institute on Taxation and Economic Policy. “The plan boosts the incomes of the wealthy with surgical precision, but gives a pittance to most working people. And it would tax some in the middle and upper-middle class more, essentially creating an even greater economic divide between the rich and everyone else.

“We should all agree that tax reform should not be used as a tool for boosting the after-tax income of the rich,” Essig added.