There are many, many problems with the so-called Tax Cuts and Jobs Act (TCJA), which President Trump signed into law at the end of 2017. Unfortunately, the bill that Democrats are marking up in the House Ways and Means Committee related to “SALT” deductions does not solve any of them but instead provides larger tax breaks to the rich. The Democrats’ Restoring Tax Fairness for States and Localities Act is written to be fully in effect only for 2020 and 2021 but realistically 2022 is the earliest year the bill could be fully in effect. If that happens, the proposal would cost $81 billion in that year alone and 51 percent of the benefits would go to the richest 1 percent of taxpayers. 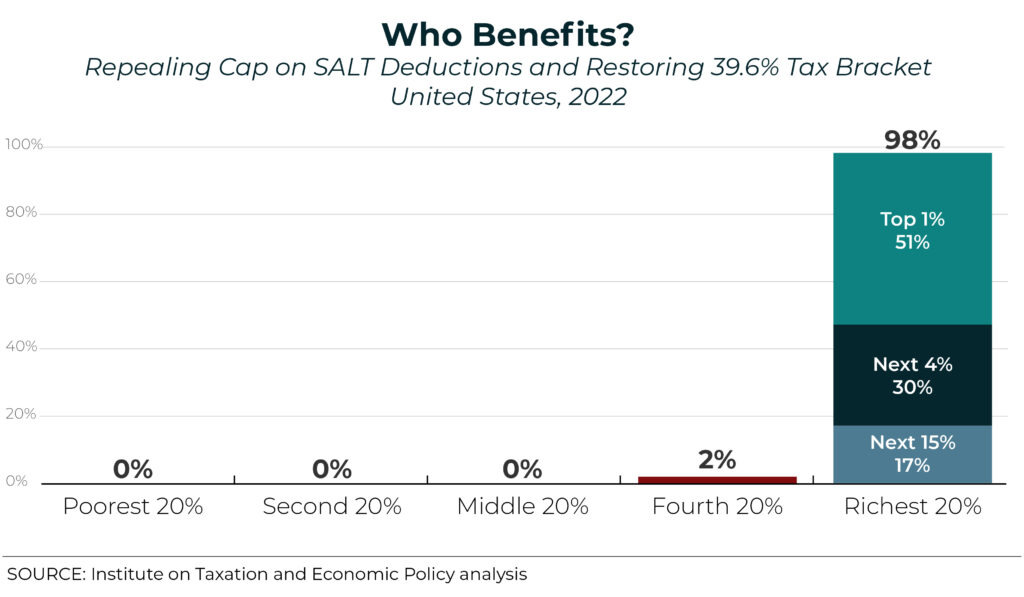 How We Got Here

When Congressional Republicans crafted their 2017 tax bill, there were many ways they could have eliminated special breaks and loopholes to offset some of the costs of their tax cuts. Instead of doing this in a comprehensive and rational way, the only significant provision they included to restrain tax breaks was one targeting residents of “blue” states with higher-than-average state and local taxes (SALT). TCJA caps deductions on federal tax returns for SALT at $10,000, which disproportionately affects residents of certain states, including California, Maryland, New Jersey and New York.

Some Democrats had previously proposed to simply repeal the cap on SALT deductions, but this proposal was widely criticized as one that would mainly benefit those who need help the least. A report published by ITEP last year estimated that the proposal would provide more than 60 percent of its benefits to the richest 1 percent of taxpayers. The report also described several alternative policies that would make the tax system less regressive.

The House Democrats did not choose any of those fairer alternatives. The Restoring Tax Fairness for States and Localities Act is an improvement over their previous proposals in the sense that it attempts to offset some of the cost of repealing the cap on SALT deductions. It does this by restoring the top income tax rate to 39.6 percent. (TCJA reduced it to 37 percent). But this is not nearly enough.

ITEP estimates that the provision restoring the top income tax rate offsets less than a quarter of the cost of repealing the cap. In order to claim that their proposal is fully paid for, the Democrats wrote their bill to repeal the SALT cap entirely for only two years, 2020 and 2021, while making the increase in the top rate permanent.

So even if this bill is enacted during this Congress (an unlikely prospect given the opposition of Senate Republicans and President Trump) it would only do away with the cap on SALT deductions for a couple of years. At that point, presumably, the Democrats would attempt to extend the repeal of the SALT cap through 2025. After that, most of TCJA’s personal income tax provisions expire anyway.

The more likely prospect is that this proposal could not be enacted until the next Congress and would go into full effect in 2022 at the earliest. ITEP estimated its impacts nationally and in each state in 2022, assuming it would be fully in effect (both repeal of the SALT cap and the restored 39.6 percent tax bracket) in that year.

They show that if the House Democrats’ proposal was in effect in 2022, it would have a net cost of $81 billion in that year alone. The estimates also show that 51 percent of the benefits would go to the richest 1 percent of taxpayers in the U.S. Clearly, lawmakers concerned about the SALT cap need to go back to the drawing board.