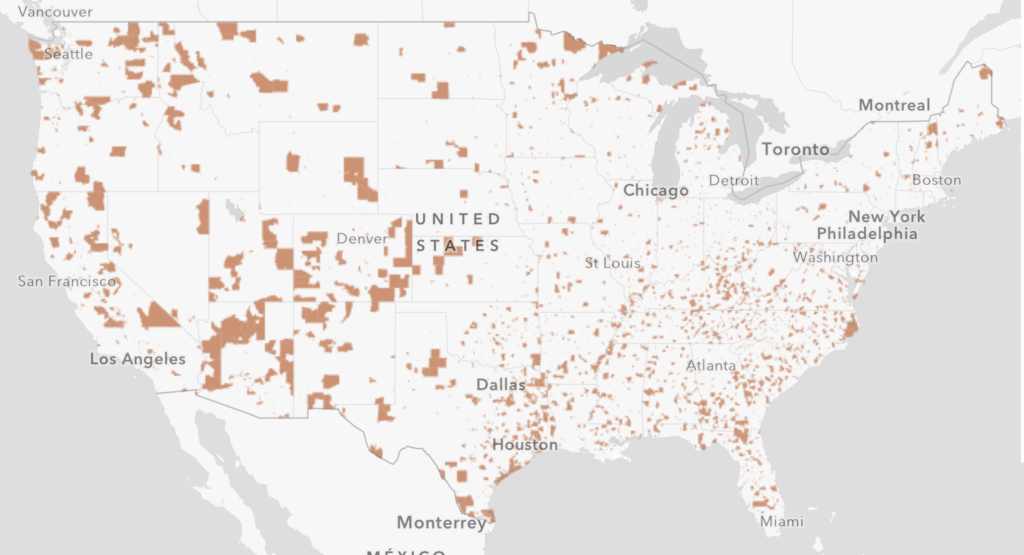 By Tatiana Kimbo and Richard Phillips

Opportunity zones are one of the few provisions within the Tax Cuts and Jobs Act (TCJA) that have been hailed as a bipartisan success to help low-income communities.

The idea behind the new tax break is to provide an incentive for wealthy individuals to invest in the economies of struggling communities. Despite alleged intentions, it appears opportunity zones are turning into yet another windfall for wealthy investors and may encourage displacement of people in low-income areas, working against the provision’s intended goal.

Under the TCJA, opportunity zones are designated, generally low-income, areas where individuals will receive tax incentives to invest. These incentives include:

To be established as an opportunity zone, governors must present census tract nominations to the secretary of treasury. The tracts that are nominated must meet the following requirements.

While the opportunity zones are touted as a novel policy, previous attempts at encouraging economic development with tax incentives based on census tracts failed to create any substantial economic growth and pushed costs onto the average taxpayer. For example, enterprise zones were enacted in the 1980s to transform the infrastructure of declining areas of the United Kingdom. Studies of the program show that enterprise zones often just moved existing jobs around (thus hurting the communities that lost jobs) rather than creating new ones and cost an exorbitant $35,000-$45,000 per job in lost revenue for the relatively few new jobs it did create.

According to the Joint Committee on Taxation,  opportunity zone tax incentives will cost around $1.5 billion per year during the first eight years that the provision is in place, with some of the revenue paid back in the later years as the deferred taxes come due. The estimated benefits from opportunity zones stem from the idea that providing a tax benefit to the rich should boost the economy of struggling communities, yet this analysis failed to consider lost revenue that could have been spent directly on investment in housing, education, transportation, and other government programs that help build infrastructure in low-income areas.

Even if the tax breaks drive some new investment into low-income areas, this does not guarantee that these investments will ultimately benefit low-income families within the opportunity zones. In fact, additional investment driven by opportunity zones could have the unintended effect of fueling higher real estate prices that serve to displace low-income citizens and businesses rather than benefit them.

The concern that opportunity zones could help fuel gentrification is reinforced by examining exactly which census tracts were designated for the program. For example, in Louisville, Ky., many of the fastest gentrifying tracts were chosen, while seven of the 18 poorest tracts were not picked. Looking at the policy more broadly, an Urban Institute study shows that the areas that were designated as opportunity zones often weren’t low-income communities that lack sufficient access to capital.

The flexibility that lawmakers have to designate the opportunity zones creates an ability for current investors to reap a windfall by manipulating tracts in favor of areas that they are already investing capital in. Since state governors maintain the right to decide which low-income areas become qualified opportunity zones, this also increases the chance that political factors may play into who reaps the benefits of opportunity zones. The fact that Storey County, Nev., became a designated opportunity zone despite having income levels that would typically disqualify it is a case in point.

Although opportunity zones were proposed as a novel bipartisan alternative to help low-income communities, the provision is yet another windfall for wealthy investors that may promote displacement in these same communities. Rather than enacting a policy that relies on an indirect benefit derived from giving tax breaks to wealthy investors, the lost revenue would be better spent on programs that promote long-term economic development in low-income communities.