Sales and excise taxes, or consumption taxes, are an important revenue source, comprising close to half of all state tax revenues. These taxes are levied in each of the fifty states and are often considered “hidden” to consumers since they’re spread out over many purchases rather than paid in one lump sum. This policy brief takes a closer look at how these taxes are calculated. 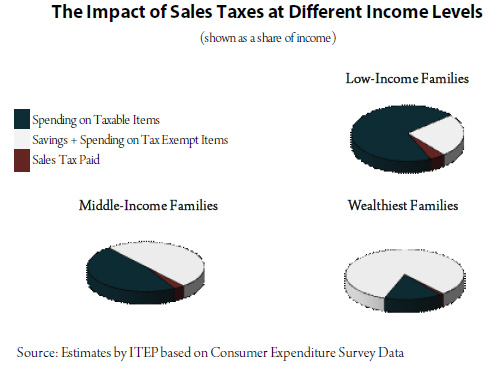 Sales taxes apply to items we purchase every day, including goods (such as furniture and automobiles) and services (such as car repairs and dry cleaning). To compute the sales tax on a taxable item, the cost of the item is multiplied by the tax rate. For example, in Michigan, where the sales tax rate is six percent, the sales tax on a $10 book is sixty cents. The cost of the book to the consumer, after tax, is $10.60. The sales tax base is the total amount paid for all the goods and services subject to the tax. The sales tax is an example of an ad valorem tax—that is, a tax based on the price of the item sold.

In theory, the sales tax applies to all retail transactions—or sales to the final consumer—but most states tax only a fraction of household consumption. Some items that can be thought of as “essentials” are often exempted from the sales tax, including rent, medicine, utilities, and groceries. But not all sales tax exemptions apply to “essentials.” Politically powerful business groups often carve out exemptions for their products, and in many states, the tax base does not include personal services such as haircuts and car repairs.

States often have more than one sales tax rate. Some states apply lower tax rates to items such as groceries or utilities, as a means of providing low-income tax relief. Other states apply a higher tax rate to goods and services consumed primarily by tourists, such as hotels or rental cars, with the goal of “exporting” part of the sales tax to residents of other states.

Many states also have local sales taxes. These usually (but not always) apply to the same items as the state sales tax. Thus, calculating the total state and local sales tax is generally involves simply adding the state rate to the local rate and multiplying it by the cost of taxable items.

Every state with a sales tax also has a use tax, which applies to items that are bought outside a state for use within a state. The use tax is designed to prevent state residents from avoiding the sales tax by purchasing goods over the phone, through catalogs, or on the Internet. Residents who purchase such goods are legally required to report and pay tax on those purchases, though that requirement is nearly impossible to enforce.

Most state sales taxes are designed to exempt purchases made by businesses, on the theory that the sales tax is supposed to be a tax on final personal consumption. But the distinction between business and individual purchases is often difficult to make, and as a result every state applies its sales tax to some business purchases. These business-input sales taxes add to the cost of producing goods and services, and are therefore mostly passed forward to consumers in the form of higher retail prices. In other words, taxing business inputs through the sales tax is generally akin to taxing the consumer more than once on the same retail sale. As a result, expanding the sales tax base to include business inputs will usually hurt low-income taxpayers.

Put another way, a 6 percent sales tax is the equivalent of an income tax with a 4.5 percent rate for the poor (that’s three-quarters of the 6 percent sales tax rate), a 3 percent rate on the middle-class (half of 6 percent) and a one percent income tax rate for the rich (one-sixth of 6 percent). Obviously, no one could get away with proposing an income tax that looked like that. The only reason this pattern is tolerated in consumption taxes is that their regressive nature is hidden in a harmless looking single rate, and the amount families pay is hidden in many small purchases throughout the year.

Unfortunately, excise taxes are often even more regressive than general sales taxes. This is because excise taxes are based on units sold, rather than the purchase price of any particular item. So the same amount of tax is due whether a customer is purchasing premium alcohol and cigarettes, or much lower-cost versions of these same products.

Both sales and excise taxes violate the basic tax fairness principle of taxing according to one’s ability to pay: low-income families are actually made to pay a larger share of their incomes in tax than their wealthier neighbors. Consumption taxes also violate this principle in their insensitivity to fluctuations in taxpayer income: families will always need to spend money on sales taxable basic necessities, no matter how little they earn in a given year. A middle-income taxpayer who loses his job will still have to spend much of his income just to get by—and will still pay a substantial amount of sales tax even though his ability to pay these taxes has fallen dramatically. (For information on how to remedy this regressivity, see ITEP Brief, “Options for Progressive Sales Tax Relief ”).

Sales and excise taxes are paid by virtually everyone nearly every day. They’re a vital component of state and local tax systems, but their regressivity raises important issues of tax fairness. Understanding how these tax works is important for advocates and policymakers that want to improve their state’s tax structure.