The personal income tax can be—and usually is—the fairest of the main revenue sources relied on by state and local governments. When properly structured, it ensures that wealthier taxpayers pay their fair share and provides lower tax rates on middle-income families. The personal income tax can be used to offset regressive sales, excise and property taxes. This policy brief explains the basic workings of the income tax.

Which Income is Taxed and Not Taxed?

Once all of a taxpayer’s potentially-taxable income is added up, adjustments to income are applied. Many adjustments originate on federal tax forms—and most states following federal rules will include these adjustments, too. Of course, states always have the option of “decoupling” from these federal adjustments, and sometimes do so. Most states diverge from the federal starting point and allow their own adjustments which include: exemptions for capital gains or dividends and tax breaks for pensions and Social Security. 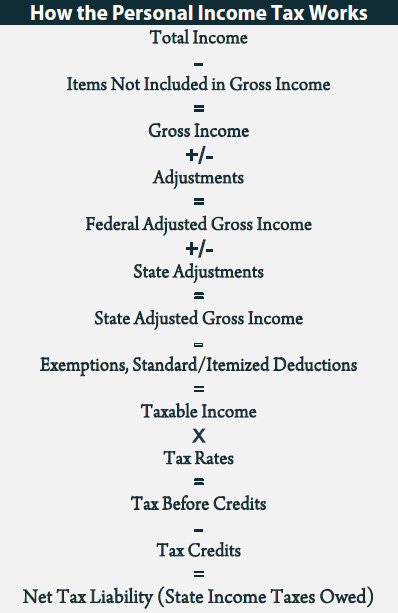 Taxable income is the amount of income that is subject to tax after subtracting all deductions and exemptions from AGI. This is the amount of your income to which the tax rates are actually applied. In computing their taxable income, federal taxpayers (and many state taxpayers) have a choice of subtracting either a basic standard deduction or special “itemized” deductions—whichever is larger. The standard deduction is a basic “no-tax floor”, designed to ensure that all families should have a certain amount of income that should not be subject to tax. Itemized deductions are the collective name for a motley group of about a dozen separate tax deductions available as an alternative to the basic standard deduction. Generally, better off families are more likely than lower income families to have enough deductions to make itemizing worthwhile. In general, the rationale for each itemized deduction is to take into account large or unusual personal expenditures that affect a taxpayer’s ability to pay. Itemized deductions include: Charitable contributions, mortgage interest, state and local income and property taxes, very large medical expenses. (For more detail on itemized deductions, see ITEP Brief, “State Treatment of Itemized Deductions”).

The final step in arriving at taxable income—the tax base to which income tax rates are applied—is to subtract personal exemptions. A personal exemption is a set dollar exemption for each person listed in a state tax return. The theory behind exemptions is that at any income level, a taxpayer’s ability to pay declines as family size increases: the more mouths to feed, the less money is left over to pay taxes.

The single most important policy choice in determining the fairness of a state’s income tax is the way its tax rates work. Most states use graduated tax rate schedules where higher tax rates are applied at higher income levels. The easiest way to make an income tax progressive is through graduated rates. The higher the rates are on wealthier taxpayers, the lower the rates can be on everyone else to raise the same amount of revenue.

Tax policy debates sometimes confuse the distinction between effective tax rates, which tell us what fraction of a taxpayer’s income goes to income tax overall, and marginal tax rates, which tell us the tax rate that applied to the last dollar of income. Anti-income-tax advocates are only too happy to foster this confusion—which is why it’s important for clear-eyed observers to understand this important distinction. As the marginal rate increases, the effective rate increases too—but it always remains well below the top marginal rate.