All of us experience the effects of inflation as the price of the goods and services we buy gradually goes up over time. Fortunately, as the cost of living goes up, our incomes often tend to rise as well in order to keep pace. But many state tax systems are not designed to take account of inflation. The result is that income taxes often grow faster than incomes—even though lawmakers haven’t actually passed any laws to make this happen. Some lawmakers have responded to this “hidden tax hike” by indexing their income taxes for inflation. This policy brief explains how indexing works and evaluates its impact on tax adequacy and fairness.

Take, for example, a hypothetical state that taxes the first $20,000 of income at 2 percent and all income above $20,000 at 4 percent. A person who makes $19,500 will only pay tax at the 2 percent tax rate (Figure 1). But over time, if this person’s salary grows at the rate of inflation, she will find herself paying at a higher rate—even though, in terms of the cost of living and ability to pay, her income hasn’t gone up at all. In this example, suppose the rate of inflation is five percent per year and the person gets salary raises that are exactly enough to keep up with inflation. After four years, that means a raise to $23,702. Whereas before all of this person’s income was taxed at the 2 percent rate, part of this person’s income ($3,702) will now be taxed at the higher 4 percent rate, even though she’s not any richer in real terms, because the tax brackets haven’t also increased with inflation.

Adding it Up: The Impact on Tax Fairness

The problem of “bracket creep” is not limited to tax brackets. Any feature of an income tax that is based on a fixed dollar amount will be vulnerable to inflationary effects. In many states, this means that tax breaks designed to provide low-income tax relief—including exemptions, standard deductions, and most tax credits—are worth a little bit less to taxpayers every year. When all these small impacts are added up, the long-term effect can be a substantial “inflationary tax hike”—and one that falls hardest on low- and middle-income taxpayers.

For example, when the Illinois income tax was adopted in 1969, the state’s personal exemption was set at $1,000—and then went unchanged for thirty years. In 1998 lawmakers doubled the exemption to $2,000, and in 2012 they raised it another $50 and indexed it to inflation. However, if the exemption had kept up with inflation since 1969, it would have been worth $6,550 instead of $2,175 in 2016. In other words, the Illinois personal exemption is worth $4,375 less than it originally was. As a result, Illinois taxpayers will pay about $1.65 billion more in income taxes in 2016 than they would have if the exemption had been adjusted to preserve its 1969 value. Of course, Illinois lawmakers never specifically voted to enact this tax hike—but it is the direct consequence of not indexing for inflation.

In practice, inflationary tax hikes hit middle- and low-income families more heavily relative to their incomes.  Expanding on the example in Figure 1, for instance, the effective income tax rate for a person earning $19,500 in the first year increases by roughly 0.3 percentage points as a result of the inflationary hike, from 2.0 to 2.31 percent. A person earning $200,000, by contrast, would see their effective tax rate rise by just 0.04 percentage points in the same scenario (Figure 2). 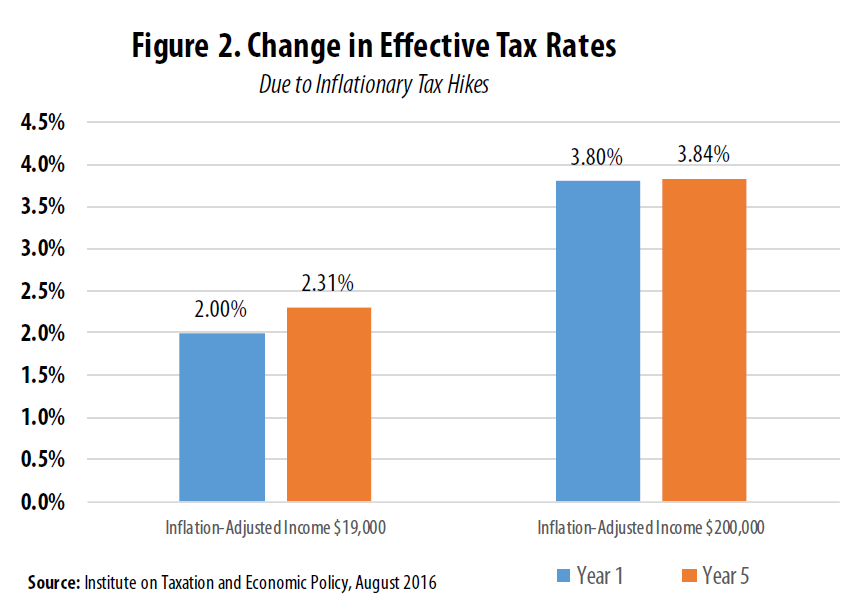 Indexation: How it Works

The way tax structures can avoid these hidden tax hikes is by “indexing” tax brackets and other tax provisions for inflation. Continuing with the example in Figure 1, indexing for inflation would mean that the $20,000 cutoff for the 4 percent tax bracket would be automatically increased every year by the amount of inflation that occurred. If inflation is five percent, the cutoff would automatically increase to $21,000 after one year. After four years (of five percent inflation), the 4 percent bracket would start at $24,310. So, when the person in our example makes $23,702 after four years, he or she would still be in the 2 percent tax bracket. In other words, indexing income taxes for inflation helps ensure that the tax system treats people in roughly the same way from year to year.

The federal personal income tax has more than 40 provisions that are indexed to inflation, including the income thresholds for tax brackets, the standard deduction, personal exemption, maximum income for the Earned Income Tax Credit, and the income thresholds for limits on itemized deductions. Even the Alternative Minimum Tax (AMT) is now indexed to inflation, a development that will spare Congress from having to enact repeated temporary “patches” to update the AMT’s parameters, as it did in the years prior to indexing.  Because of these annual adjustments, taxpayers retain the value of various benefits and are protected from unintentional tax hikes from year to year.

Some states also reduce inflationary tax hikes by indexing elements of their tax codes. States that couple their tax codes to the federal rules more easily avoid inflationary hikes.  For example, more than half of the 26 states (plus the District of Columbia) that offer an Earned Income Tax Credit (EITC) base their credit on the federal EITC. Since the federal EITC is inflation-adjusted, the value of state EITCs is also preserved from year to year. This is not the case for low-income credits in states like Arizona that are not based on the federal EITC and not indexed for inflation. But even states that don’t closely couple to the federal income tax can take action to avoid inflationary tax hikes by indexing specific portions of their tax codes. For example, both Nebraska (2014) and Arizona (2015) recently passed laws indexing their income tax brackets.

The personal income tax is not the only tax affected by inflation. Some components of the property tax are equally susceptible to hidden tax hikes. Property tax homestead exemptions or credits, for example, are often offered as a flat dollar amount whose value does not hold up over time in the face of inflation.

For example, if the Missouri property tax credit’s maximum income level for eligibility and the maximum credit amount had been indexed for inflation since it was first introduced in 1973, the income threshold would have been $40,700 in tax year 2016 instead of the statutory $30,000, and the maximum value of the credit would have been twice its current value. The impact of inflation, combined with growth in property values, means that un-indexed property tax credits in states such as Missouri become less effective as property tax relief tools every year.

Lack of inflation indexing can also have implications for flat excise taxes such as per-gallon taxes on gasoline or per-pack taxes on cigarettes. Under these taxes, however, a lack of indexing can actually result in hidden tax cuts—rather than hidden tax hikes—if tax rates are allowed to stagnate for years while inflation erodes their “real” value.  Tennessee’s 20 cent per gallon gas tax rate, for example, has lost roughly half its purchasing power since being written into law in 1989.

Should States Index Their Income Taxes?

Inflationary tax hikes do have one potential advantage for policymakers—because they are basically invisible to taxpayers, they are much easier to enact than explicit tax increases. But in practice, they are not a good tax policy strategy. It’s hard to know the impact of inflationary tax hikes ahead of time, and these hidden tax hikes usually fall most heavily on low- and middle-income taxpayers. “Invisible” tax hikes make the tax system harder to understand, and few lawmakers would choose to balance state budgets by imposing this sort of tax hike. Indexing tax systems for inflation allows lawmakers to create the income tax structure they want—and to ensure that the impact of the income tax on taxpayers at different income levels will only change when they want it to.