ITEP’s Commitment to Being a Voice for Low-, Moderate- and Middle-Income People in Tax Policy Debates 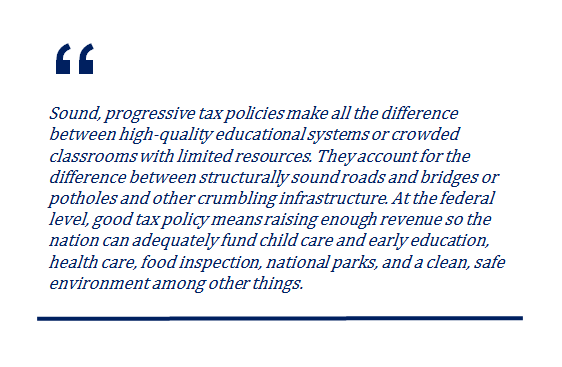 ITEP today is pleased to announce that we’re launching an overhauled website that better reflects the work of our organization and makes our federal and state tax policy research more accessible.

For years, ITEP has been known mostly for our analyses of state tax policies. Advocates and policymakers have and continue to use data that we produce using the ITEP Microsimulation Model © to aid their efforts to secure fair, sustainable state tax policies that raise adequate revenue to fund our common community priorities.

Less widely known is that the ITEP model also has provided the core analyses behind Citizen for Tax Justice’s (our c(4)partner organization) federal policy work. Going forward, ITEP researchers are stepping into a federal policy research and advocacy role in a more forward-facing way. Not only will we use our model to produce revenue estimates and distributional analyses of federal policy proposals, our researchers will generate and publish qualitative analyses and other research under the ITEP name. Although federal policy research will no longer be published under the CTJ brand, CTJ will continue to work with its many partners as an advocacy voice for a fair and just tax system at both the federal and state levels.

A strong voice for working people in federal and state tax policy debates is absolutely critical. Sound, progressive tax policies make all the difference between high-quality educational systems or crowded classrooms with limited resources. They account for the difference between structurally sound roads and bridges or potholes and other crumbling infrastructure. At the federal level, good tax policy means raising enough revenue so the nation can adequately fund child care and early education, health care, food inspection, national parks, and a clean, safe environment among other things.

As you know, Congress and the president are poised to pass major tax changes in the coming year or so. The tax proposals currently being floated are being sold as jobs-creating plans that will boost the middle class. But ours and others’ preliminary analyses reveal quite the opposite. President Trump’s recent tax sketch includes too few details to analyze in depth, but its vague outline calls for radically slashing corporate taxes, cutting the top individual tax rate and eliminating the estate tax, all of which would benefit the wealthy. And the American Health Care Act would diminish access to health care for 24 million people while providing $800 billion in tax cuts for the very rich.

At the state level, a handful of legislatures are examining policies that will raise much-needed revenue for priorities such as infrastructure and education, but the leading trend is regressive tax cuts that starve state budgets of necessary resources. For the last several years, Kansas has been an example of tax cuts and regressive tax policy gone awry. After dramatic tax cuts that favored the wealthy and businesses, the state has dealt with annual, multi-billion-dollar revenue shortfalls and has had to cut funding for education and other basic services.

Yet other states are disregarding this cautionary tale and peddling tax cuts as a way to create jobs and grow the economy, and lawmakers at the federal level are selling the same spurious tax-cut remedy.

Given the great income divergence between the rich and the rest of us, we better make sure proposed policies square with our elected officials’ rhetoric.

ITEP and others who promote fair, progressive tax policy are up against forces that have spent decades and millions of dollars trying to convince the public that taxes are a burden, unconnected to the fundamental services that make this nation a great place to live. But we will continue to use our analytic expertise, research, and copious local, state and national historical examples to reveal facts and the truth: Tax cuts for the wealthy benefit the wealthy and starve local, state and federal governments of necessary resources.

As the important tax debates of the day move forward, ITEP staff is prepared to rapidly analyze proposed tax plans at all levels of government with a keen eye on their effects on low-, moderate- and middle-income people. We will remain a voice for working people in tax policy debates at the state and federal level and advocate for fair, progressive tax policies that raise enough revenue to meet our common priorities.