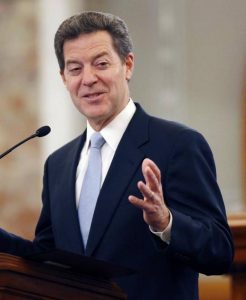 Back in December, Kansas Gov. Sam Brownback gave an interview with the Wall Street Journal and suggested President-elect Trump should follow his state’s example and cut taxes as well as spending.

The sheer gall of the suggestion belies the fact that Kansas’s tax cuts have resulted in credit downgrades, lack of adequate funding for essential services such as education, and ongoing significant revenue gaps (including a $340 million revenue gap to close this fiscal year and an estimated $1.1 billion gap through the end of fiscal year 2019).

Brownback’s distorted reality was on display again last week in his State of the State Address, in which the fact that Kansas has been struggling with perpetual budget crises for the past four years was remarkably absent.

And based on his budget proposal, it seems achieving a structurally balanced budget is not truly a priority for the governor. Proposed measures to achieve a “balanced budget” include more of the same budget gimmicks and increased reliance on regressive sales taxes Kansans have seen over the past few years: hiking tobacco and alcohol taxes; taking money from the Highway Fund to cover general fund expenses; selling off revenue targeted to fund early developmental programs; and liquidating the state’s investment funds (which are intended to boost the state’s interest earnings, not plug budget holes).

These proposals do not put Kansas on a path toward achieving the stable fiscal footing needed to promote broad prosperity for all Kansans. Rather than raise revenues in a manner that asks more of those who reap more economic benefits, his one-time proposals continue to rely on those with the least and will only make the disparity between the rich and everyone else more vast. And ordinary people will continue to pay in other ways for these poor policy choices that have failed to generate promised results and gutted the state of resources needed to fund services for the disabled, mental health, and education.

Instead of acknowledging these fundamental problems, Brownback has dug his heels in, holding up his small business exemption—whereby more than 330,000 business owners pay no income tax—as a model for the nation.

Brownback in his address to Kansans said the state is “the envy of the world.” While Kansas does have beautiful sunsets, from an economic point of view, the state is failing to adequately invest in its infrastructure and people. A state in which much of the rewards flow to the top is hardly an example for others to follow. Kansas should clean its fiscal house before inviting others to follow its example.

Kansans are increasingly realizing the gap between what is, what is promised, and what might otherwise be and they’re opting for the latter. A growing number of lawmakers are doing the same. Hopefully, lawmakers will reject Brownback’s “everything is fine” vision of the state and steer the state toward meaningful tax reform such as the plan proposed by Rise Up Kansas.