Maine, like the vast majority of other states, has had an upside-down tax code for decades. At least as far back as 1996, Mainers with low incomes have paid a larger share of every dollar they earn to state and local taxes than the top 1 percent.

Not anymore. Starting in 2020, the bottom 40 percent of Mainers by income will no longer pay more than those who earn the most.

Three major tax policy changes this year—expansions of the state’s Earned Income Tax Credit and two property tax relief programs—brought Maine to this milestone for tax fairness. Both of these are progressive policy options target families who need it most. This legislative milestone is also the culmination of years of successful tax policy efforts by the Maine Center for Economic Policy and our partners and allies inside and outside the Maine Legislature.

This victory for tax fairness will make a real difference for low- and moderate-income families. Instead of worsening inequality, Maine’s tax code will help lift families out of poverty. And refundable tax credits like the EITC will provide more money to low- and middle-income families so they are better able to cover their bills.

Progress in the face of anti-tax headwinds

From 2011 through 2018, Maine Gov. Paul LePage pushed an aggressive anti-tax agenda. While his ultimate goal—eliminating the state’s income tax—failed, he nevertheless enacted several rounds of income tax cuts that primarily benefitted the wealthiest households in Maine.

The LePage tax cuts made our state tax code less fair and made it harder to fund priorities such as education, local services, and health care, which create opportunity for low- and moderate-income households.

But even as Governor LePage slashed income tax rates, MECEP successfully advocated for tax policies that mitigated the damage and laid the groundwork for 2019’s tax fairness milestone:

While the state still suffered a dramatic loss of revenue from 2011 through 2019, these policies reduced the harm of Gov. LePage’s income tax cuts by providing targeted benefits for low- and moderate-income families.

Building on a strong foundation

By 2018, only five states and the District of Columbia had fairer tax codes than Maine based on ITEP’s Inequality Index, which ranks states according to how their tax codes exacerbate—or mitigate—inequality.

Nevertheless, Mainers who earned the least still paid a larger share of their income to state and local taxes than the top 1 percent. 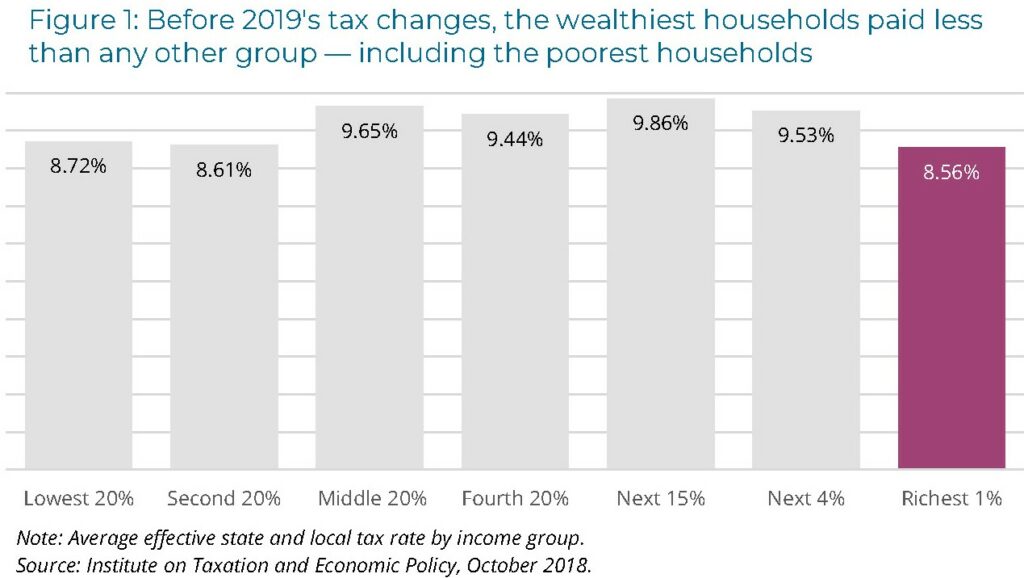 In 2019, Maine built on recent changes in the tax code to:

This package of fairness-oriented tax policies pushed down the average effective state and local tax rate for the bottom 40 percent of households, who will no longer pay more than the top 1 percent. 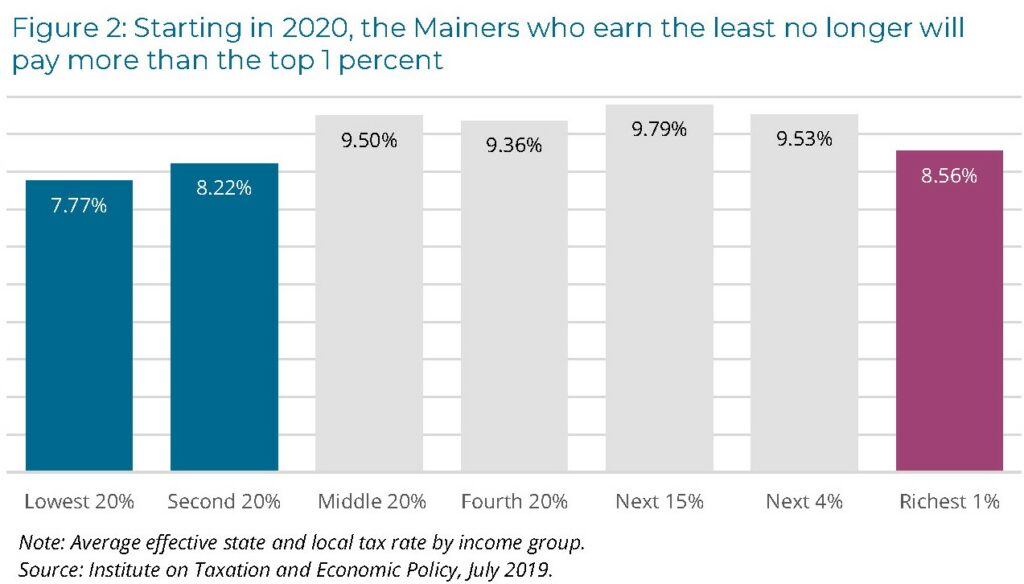 What’s next for Maine?

Fairness is just one element of responsible tax policy. As we celebrate this year’s milestone for tax fairness in Maine, MECEP remains focused on ensuring the state has adequate revenue to meet its obligations and remove barriers to prosperity for Maine families.

Even the fairest tax code is inadequate if it doesn’t raise the resources necessary to pay for investments that support healthy families and thriving communities.

Income tax cuts that primarily benefitted the wealthy cost Maine hundreds of millions of dollars every year, leaving the state unable to fully fund public schools and local services. Even as our tax code has gotten fairer, classrooms remain underfunded and municipal budgets are stretched to the breaking point.

In the next few years, Maine must raise additional revenue without undermining its victories in tax fairness. Still, this bold step forward for Maine families is a reminder that more progressive state tax policy is possible.

Sarah Austin is MECEP’s policy lead on tax and budget issues. She conducts research and impact analyses, writes educational materials, and collaborates with partners. Sarah is skilled in data collection, research, and statistical and policy analysis. Sarah holds a master’s of public affairs from the University of Wisconsin-Madison’s La Follette School of Public Affairs and a bachelor’s of science in environmental policy from Maine’s Unity College.