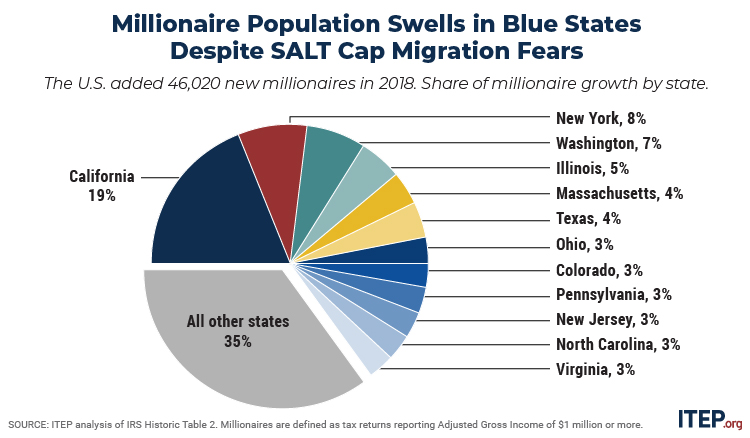 For years, anti-tax advocates have claimed higher-tax states face a significant outflow of millionaires to states with lower taxes. That chorus grew louder after the 2017 Tax Cuts and Jobs Act (TCJA) scaled back higher-income households’ ability to deduct their state and local taxes (SALT) on their federal returns.

Although the TCJA has created a slew of problems, it is now clear that a mass migration of top earners out of higher-tax blue states is not one of them.

New IRS data released today reveal the impact of federal tax law across all 50 states in 2018, the first year that TCJA was in effect. Despite claims that capping the SALT deduction at $10,000 per year would cause high-income taxpayers to flee states with higher income or property taxes such as California, New York, and New Jersey, data show that these states added a significant number of millionaires to their tax rolls between 2017 and 2018.

California and New York saw more growth in millionaire tax returns than any other state in 2018. Taken as a group, California, New York, New Jersey, Massachusetts, and Illinois saw 40 percent of the nation’s growth in millionaire tax returns occur within their borders, despite the fact that these states are home to just 27 percent of the nation’s population. If the analysis is broadened to include all returns reporting at least a half-million dollars in income, these five states’ share of the national total growth swells even further to 42 percent.

These findings should not come as a surprise. The best available research has already made clear that high-income earners do not move in meaningful numbers to shave a few percentage points off their state tax rates. Top earners have already found success and typically choose where to live based off family and business connections and quality of life, not differences in tax rates that have no direct bearing on their standard of living.

To be sure, the SALT cap is flawed policy and should be replaced with a more comprehensive itemized deduction reform. But there’s no need to concoct migration myths to make the case for reform. Cap or no cap, it’s clear that state tax rates are not stopping millionaires from choosing to live in states with progressive tax systems.

This is especially important to keep in mind during the current crisis. States are facing large and growing revenue shortfalls and will soon be confronted with the choice of either raising taxes on top earners or enacting severe cutbacks in services that will damage their economies for years to come. Predictions of widespread millionaire migration are sure to be trotted out in opposition to progressive tax reforms in the months ahead, but the newest IRS data suggest that those predictions are off the mark.