The Health, Economic Assistance, Liability Protection and Schools (HEALS) Act released by Senate Republicans Monday includes a tax rebate that is slightly more generous than the one provided under the March CARES Act, but it fails to correct most of the earlier act’s problems. House Democrats addressed these shortcomings in the May HEROES Act, a better starting place for negotiations over the next round of COVID-19 relief.

ITEP has analyzed both acts to provide a detailed comparison of how the tax rebate provisions would affect families across the income spectrum and by race. Both measures would provide cash payments to a majority of individuals and families, but the HEROES Act goes farther and is more inclusive. We also make some comparisons to the CARES Act, which was the measure passed into law by both houses in March.

Both CARES and HEALS provide $1,200 for unmarried taxpayers and $2,400 for married couples plus $500 for each dependent. The CARES Act, however, limited the additional $500 to dependents under age 17, but the HEALS Act provides it for all dependents, regardless of age (The HEROES Act also includes a provision to retroactively make this change to the CARES Act tax rebate). While this is an improvement, the HEALS Act fails to address other problems with CARES Act payments.

HEALS Act Leaves Out Undocumented Immigrants and Their Families

Most importantly, the HEALS Act’s tax rebates, like those of the CARES Act, leave out undocumented immigrants working in the United States who file taxes using an Individual Taxpayer Identification Number (ITIN) as well as their spouses and children, excluding an estimated 4.3 million adults and 3.5 million children from the benefit. The House Democrats’ HEROES Act would extend the tax rebate to ITIN filers and their families and retroactively expand the tax rebate under the CARES Act to these taxpayers.

Another problem with the HEALS Act is that it short-changes single parents. The HEALS Act’s additional payment of $500 for each dependent regardless of age is an improvement over the more restricted provision for dependents in the CARES Act. But the payment structure continues to provide less to single parents who logically should receive more help.

HEROES Act Does More for Middle- and Low-Income Families

The tax rebates under the HEALS Act would have the same income limits as the tax rebates provided under the CARES Act and those proposed by the House Democrats in the HEROES Act. Payments would be phased out at a rate of 5 cents for every dollar of income exceeding $75,000 for singles, $150,000 for married couples and $112,500 for single parents.

Despite having essentially the same income limits, the HEROES Act provides more help to moderate-income households simply because it is more generous to people with dependents, providing $1,200 for each dependent rather than $500 (although the HEROES Act limits the additional payments to three dependents). 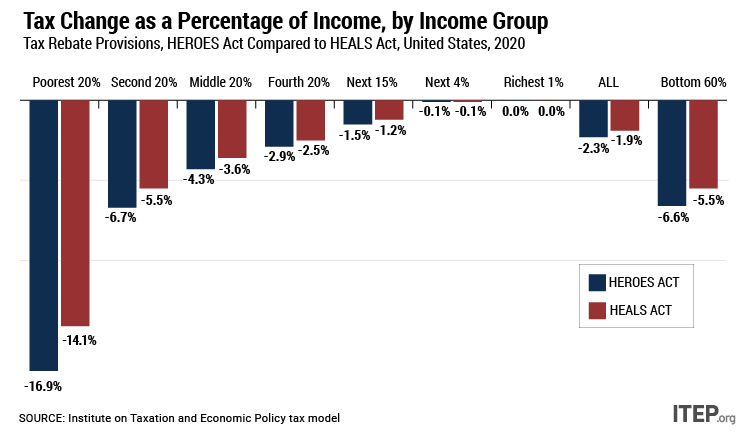 HEROES Act Does More to Address Racial Inequality During the Pandemic

White taxpayers have higher average incomes than other racial and ethnic groups, and a disproportionate share of overall income flows to white taxpayers. White households make up 68.8 percent of tax units but take in 76.4 percent of income. (A tax unit is a tax filer or someone who could file taxes and is not a dependent of someone else.) 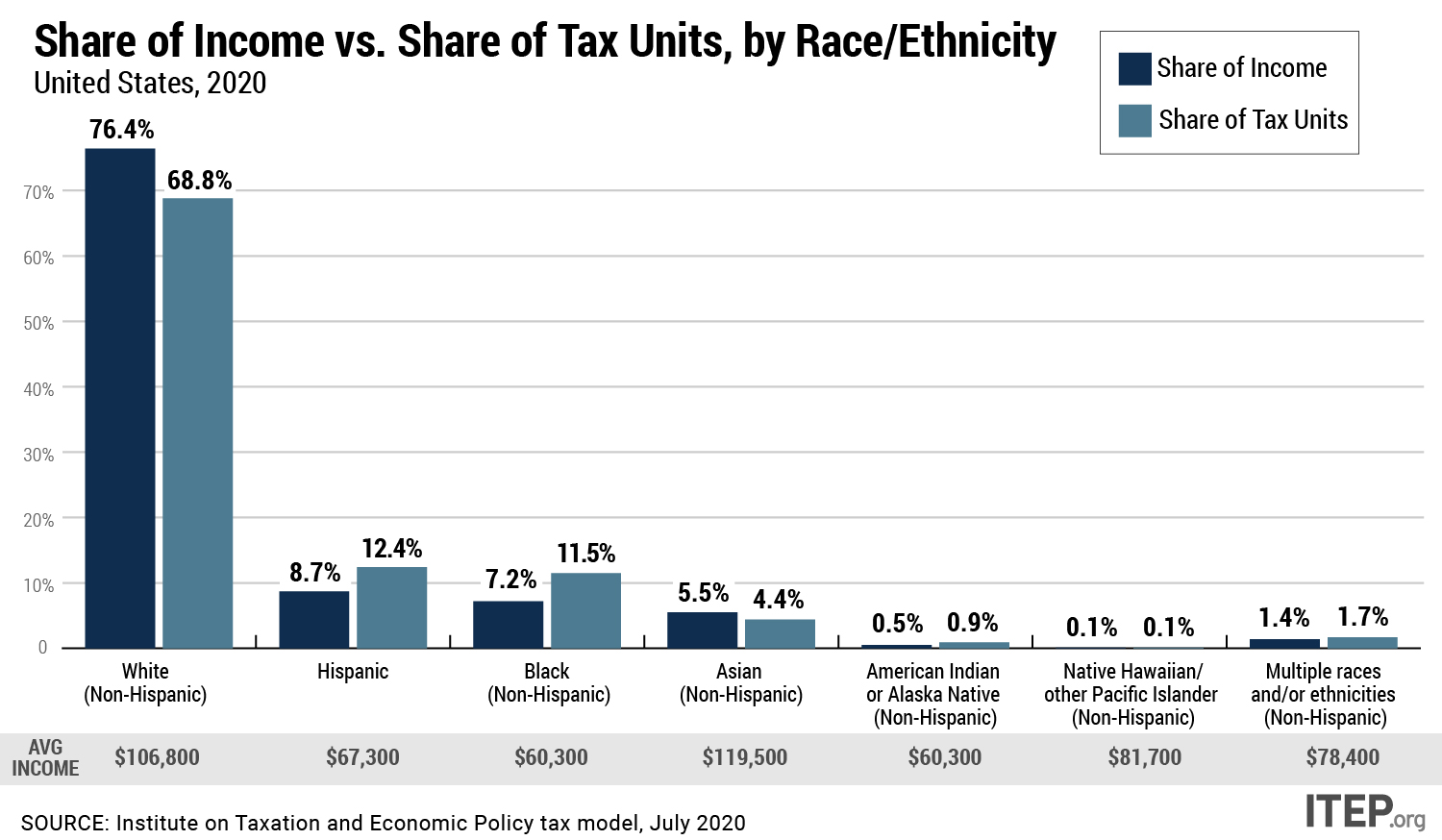 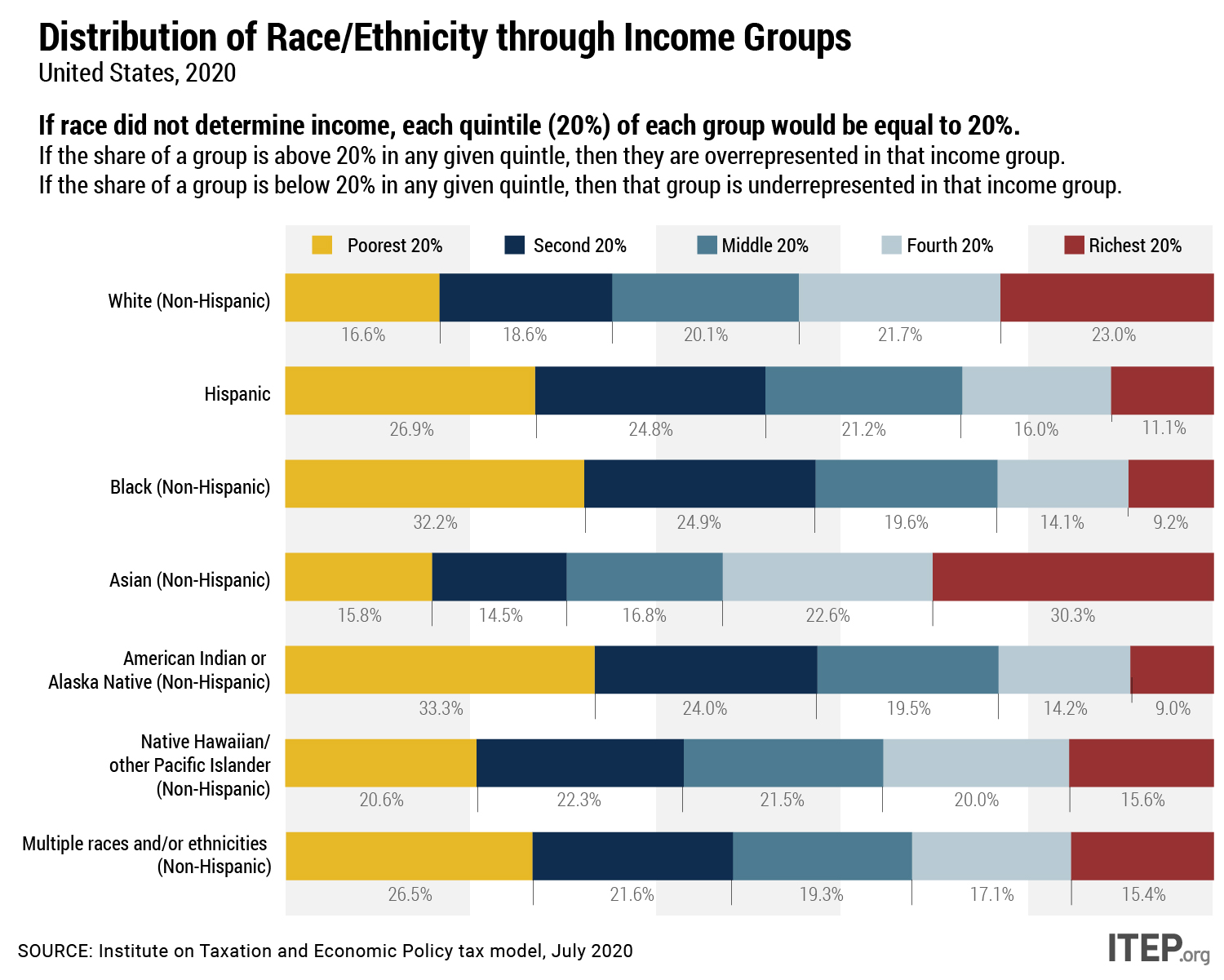 Most of the benefits of both the HEALS and HEROES Acts would flow to white taxpayers because they are a majority of the population. 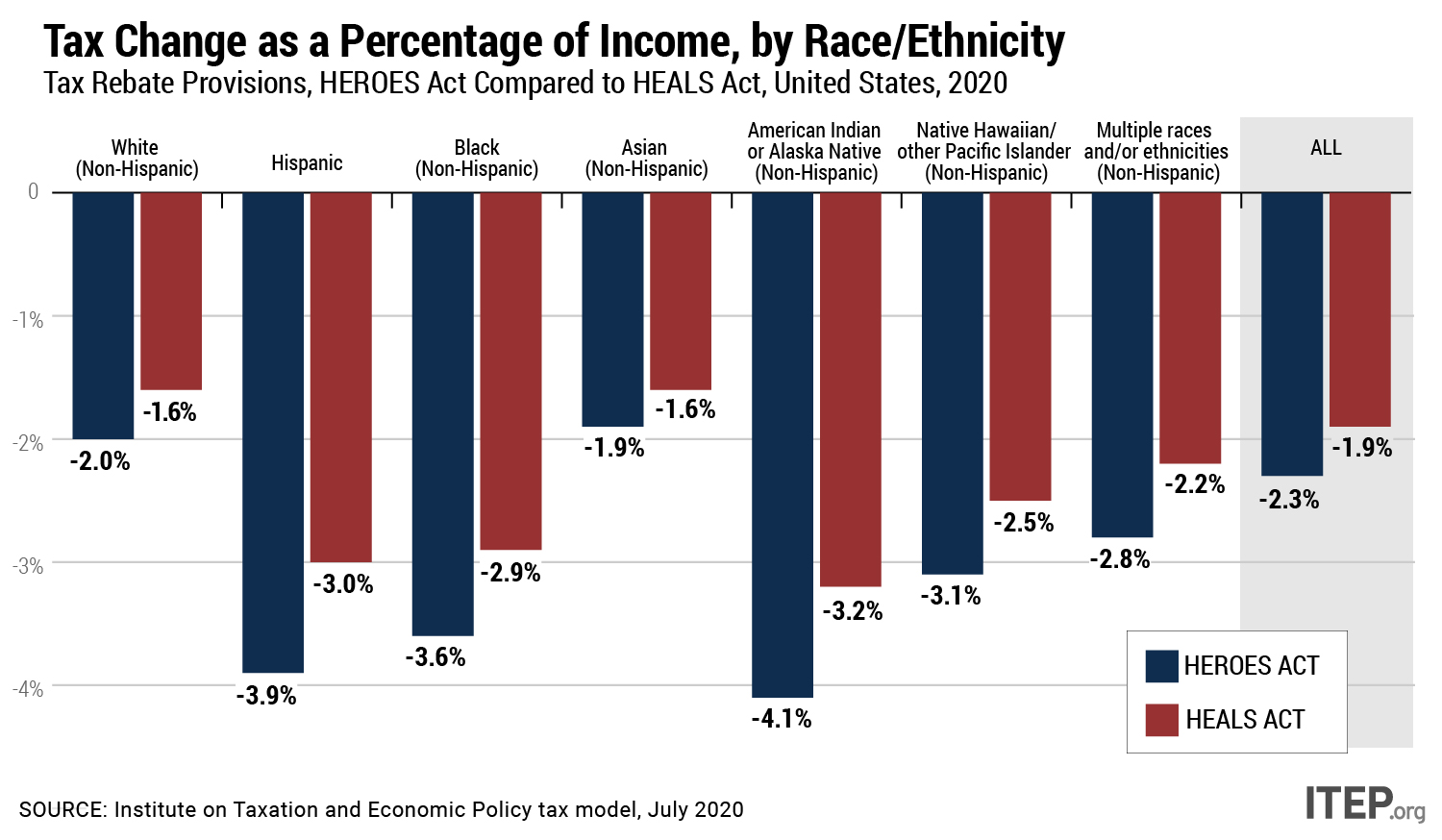 Not included in these figures is the additional $9.4 billion in benefits that the HEROES Act would provide by allowing ITIN filers and their families to access the tax rebate, which would be a relatively small addition to the overall cost of the proposal. If the HEALS Act were amended to include ITIN filers and their families, the additional cost be just under $7 billion. 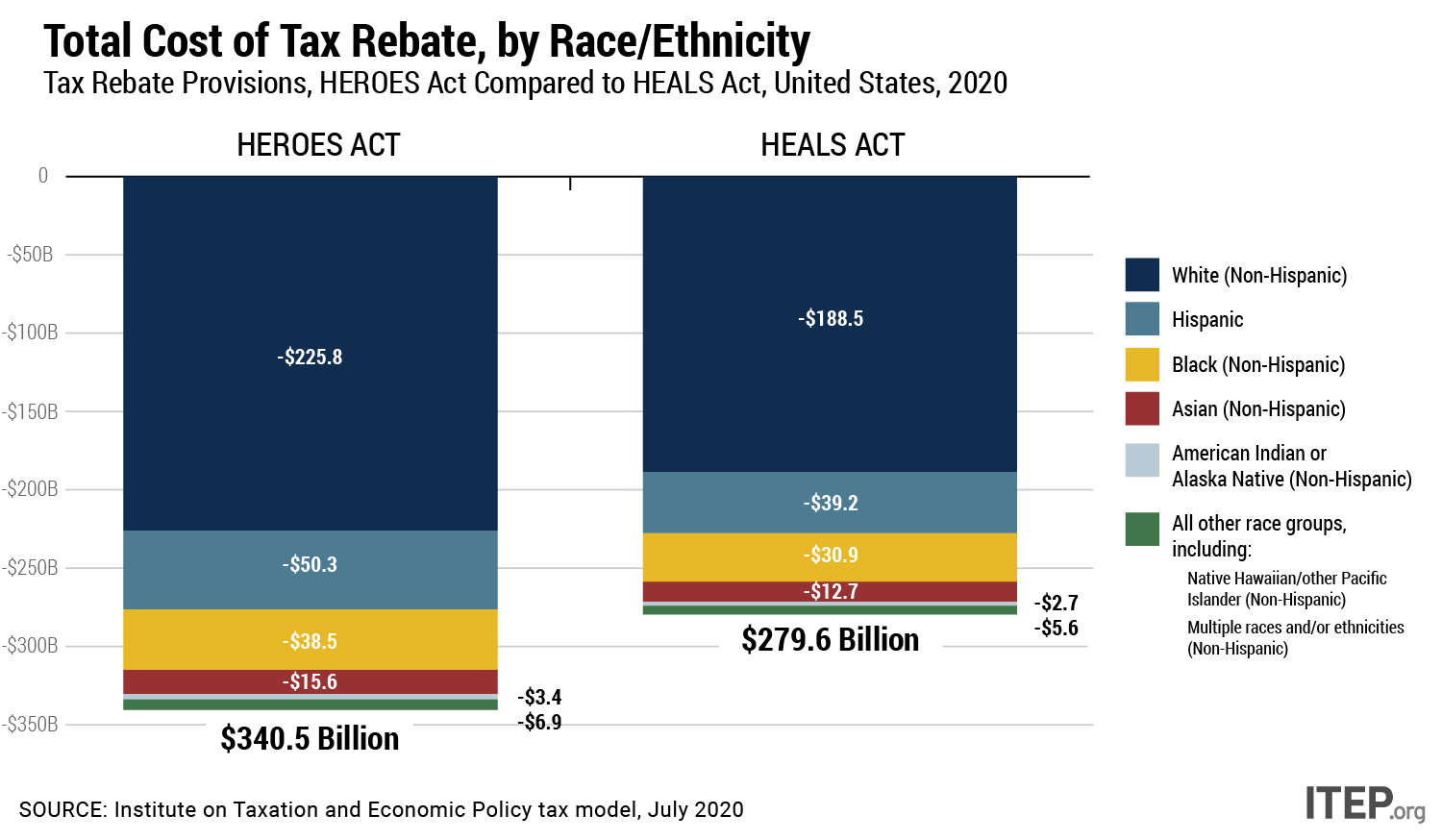 Data released by the Center for the Study of Poverty at Columbia University found that government intervention helped prevent millions of families from falling into poverty at the height of our shuttered economy. The study attributed this to both the tax rebates and expanded unemployment insurance benefits. The nation remains in the throes of an unprecedented pandemic, and millions of workers remain unemployed, or face reduced work hours and struggle to pay for housing and put food on the table.

We have had ample time since Congress passed the CARES Act to determine what worked and what can and should be improved upon. The HEROES Act is a better starting point for the next rebate. But a better option would be automatic ongoing payments (monthly or quarterly) until the crisis subsides as some proposals have included.