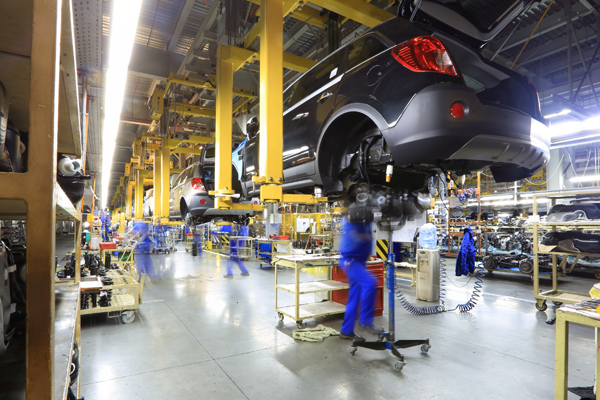 General Motors’ announcement this week that it will lay off 14,000 North Americans workers and shift its focus to SUVs and other vehicles (many of which are manufactured outside of the United States) has raised the question of whether lawmakers should intervene to ensure companies newly flush with tax-cut-boosted profits aren’t harming U.S. workers.

Sen. Amy Klobuchar (D-MN) and several Senate co-sponsors this week introduced the Removing Incentives for Outsourcing Act, which curbs harmful new incentives created by the Tax Cuts and Jobs Act (TCJA) that encourage companies like GM to move their profits and operations offshore.

One of the most harmful provisions of the tax law is a provision that allows corporations to deduct 10 percent of some foreign income from their taxes based on how many tangible assets they have offshore. For example, if a company has $100 million in offshore assets, the first $10 million of offshore profits are exempt from U.S. taxation. This means that the more a company shifts operations offshore, the bigger the break they will receive on their offshore profits. Sen. Klobuchar’s bill would eliminate this loophole, thereby reducing the tax incentive for companies to outsource.

Sen. Klobuchar’s bill also closes a loophole that allows corporations to use foreign tax credits to shelter profits in tax havens from U.S. taxes. Corporations receive a foreign tax credit (FTC) for taxes they pay to other governments on their offshore profits, effectively reducing companies’ U.S. tax liability by the amount they report paying to other countries. In theory, this makes sense because it prevents double-taxation.

However, problems arise when a company has excess FTCs, because, for example, it generated profits in a country with a higher corporate tax rate. The federal tax law allows the company to use these excess FTCs to reduce U.S. taxes on profits from other countries—including tax haven countries with little or no corporate taxes. So, in addition to ensuring that profits are not double taxed, companies use the foreign tax credit to ensure that some profits are not taxed at all. Making matters worse, allowing the foreign tax credit on a worldwide basis may encourage companies to invest in high-tax foreign countries because it would allow them to generate larger foreign tax credits.

To fix the excess credit problem created by the TCJA, Sen. Klobuchar’s bill would require that the tax rate on offshore profits be applied on a per-country basis. In other words, it would not allow foreign tax credits from higher tax countries to reduce U.S. taxes on offshore profits earned in low- or zero-tax countries. According to an analysis from Dr. Kimberly Clausing of Reed College, the per-country approach would decrease profit shifting by two-and-a-half times the amount of the current global approach. This means that this provision of the legislation could raise around $13.9 billion in 2018 or around $159 billion over the next 10 years.

A final key provision of Sen. Klobuchar’s bill is that it would require the Joint Committee on Taxation (JCT) to study the impact of the international tax provisions in the TCJA and evaluate the extent to which they incentivize moving jobs and profits offshore. While such a study should have been conducted before the passage of the TCJA, it is imperative to the debate on reforming the code going forward for the JCT to take a deep dive into these provisions.

Sen. Klobuchar’s bill follows an approach similar to the one proposed in the Per-Country Minimum Act introduced earlier this year by Rep. Peter DeFazio (D-OR). Where the bills differ is that Rep. DeFazio’s bill included a reform that would raise the tax rate on offshore income (by matching the deduction defining taxable offshore income to the same level as the tax deduction for foreign derived intangible income) and does not include the provision requiring the JCT to conduct a study.

It is worth noting that outsourcing decisions by companies are driven largely by factors outside the tax code. In General Motors case, it appears that consumer demand for specific types of motor vehicles are driving the layoff decisions rather than the changes in the tax code. Still, it is critical that we have a tax code that does not put its thumb on the scale in favor of outsourcing and the Removing Incentives for Outsourcing Act would help accomplish that goal.