New Report Finds Tax Transparency Is Not Just Ethical: It Has a Real Fiscal Impact 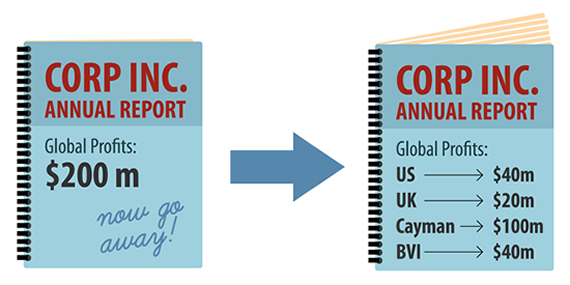 A new report by Hubertus Wolff and Michael Overesch finds that public country-by-country reporting (CBCR) can have a significant fiscal impact. In fact, the report shows that new CBCR rules applied to European banks appear to have substantially increased the tax rates paid by banks that engage in tax-haven activities. This means that CBCR may not just improve the integrity of the tax system and provide critical information so investors can gauge investment risks, but may also have a much more immediate impact on curbing tax avoidance.

Public CBCR requires companies to publicly disclose basic financial information, such as their profit, taxes, revenues, and number of employees on a country-by-country basis. In recent years, transparency advocates across the world have pushed to enact this policy, including in the United States. While there has been success as part of the OECD’s Base Erosion and Profit Shifting project to get countries to require confidential CBCR to tax agencies, efforts are ongoing to have this reporting made public.

The EU enacted one of the first country-by-country regulations in 2014 as part of the Capital Requirements Directive IV (CRD IV). These regulations mandated that EU multinational banks headquartered in the European Economic Area publicly disclose financial and tax data, providing new geographical information of where tax payments take place. This regulation allowed researchers to evaluate how transparency functions as an anti-tax avoidance measure, to determine whether public exposure will alter the banks’ behavior.

Disclosure makes it easier for the public to identify bad actors. CBCR also makes it easier for tax authorities to identify companies that should be scrutinized through audits. And every documented instance of corporate tax avoidance makes it more likely that elected officials will enact laws or regulations curbing tax giveaways. Each of these consequences should motivate multinational corporations to scale back their avoidance when required to publicly disclose basic tax and financial information.

Three years after the EU established country-by-country regulations, the impact is apparent. When comparing domestic banks to multinational banks that had activities in European tax havens, tax-haven banks experienced an average effective tax rate increase of 3.7 percentage points relative to their domestic counterparts. Additionally, total tax payments of those banks, expressed as a share of annual profits, increased on average from 28.3 to 31.2 percent.

When generally comparing the entire affected group of multinational banks (including those that did not partake in tax-haven activities) to domestic banks, average effective tax rates increased by 2.5 percent points. During the same time period, U.S. multinational banks and manufacturing companies, which were not subject to these regulations, did not experience such an increase. This suggests that higher rates on European banks are due to CBCR, rather than other international factors.

While the accomplishments within this small group of multinational corporations are promising, most are still not required to publicly file a country-by-country report. The United States should lead the way by passing legislation to require public CBCR for all companies. If Congress refuses to act, the SEC and Financial Accounting Standards Board (FASB) have an obligation to require public CBCR to inject integrity back into the tax system. While ideally CBCR should be paired with a variety of additional reforms to fix our international tax system, such as equalizing foreign and domestic tax rates or cracking down on inversions, this new research indicates that tax transparency can have a significant impact all on its own.