Read the Report in PDF (Includes State by State Appendices)

Over the next few months, state lawmakers must decipher how their existing tax laws are impacted by the federal Tax Cuts and Jobs Act (TCJA) enacted in late 2017.  The new federal law has consequential implications for the states that piggyback on federal law to determine their own personal and corporate income taxes.  One of the changes in the federal law that has ramifications in every state with a personal income tax is the new provision allowing  taxpayers to make tax-exempt withdrawals from 529 college savings accounts to pay for K-12 religious and private school tuition.  These fees are now redefined as “qualified higher education expenses.” The law permits 529 savings accountholders to withdraw up to $10,000 federal income tax-free for each beneficiary per year.  It also allows for the rollover of assets into ABLE accounts, a similarly-modeled savings plan for individuals with disabilities.  This policy brief explains the federal and various state-level breaks for 529 plans and explores the potential impact that the change in federal treatment of 529 plans will have on state revenues.

529 plans were first introduced at the state level to incentivize saving for future college costs, and later the federal government passed legislation exempting 529 earnings from the federal income tax.  The plans are savings vehicles operated by states or educational institutions.  As seen in Figure 1, taxpayers can receive up to five different types of tax breaks when making use of a 529 plan, though not all of these breaks are available in every state.

What are qualified higher education expenses? 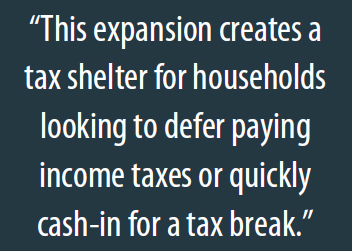 As defined by Section 529 of the U.S. tax code, qualified higher education expenses include tuition, room and board expenses, books, special needs expenses, computers and related technology expenses such as Internet, software, or printers when enrolled at an eligible educational institution.  The federal tax bill enacted in late 2017 added language that extends the definition of qualified expenses to include expenses for religious and private K-12 education.  Withdrawals from 529 plans used to pay any of these expenses are exempt from federal income tax.

Examples of non-qualified withdrawals include indirect personal expenses, student loan payments, transportation expenses, and student activity fees, including sorority and fraternity dues.  Households can request non-qualified withdrawals at any time, but the earnings are subject to a 10 percent federal tax penalty in addition to potential state income tax recapture.

This expansion creates a tax shelter for households looking to defer paying income taxes or quickly cash-in for a tax break – families in many states can now make a contribution to a 529 account, receive a state income tax deduction or credit in exchange for their contribution, and then immediately withdraw those funds to pay for the private school tuition.  In this scenario, the 529 plan is not a savings vehicle at all, but rather a brief pit stop whose only purpose is to allow taxpayers to pay for their children’s private school educations with pre-tax dollars.

States offering tax deductions or credits based on annual contributions to 529 accounts will be left facing shortfalls of income tax revenue because of this change hastily enacted by Congress.  Since many states’ definition of “qualified higher education expenses” are tied to federal law, the states that offer the deduction will be significantly impacted by budget shortages.

Many others including Louisiana, Nebraska, and New York all have issued public statements in the wake of the new federal law.  Louisiana state law allows funds to be withdrawn for higher education expenses only: “The use of funds in a START Saving Program account will not be available for use for any K-12 educational expenses unless the Louisiana Legislature acts to amend the current START laws.”

Nebraska also responded, “while the new federal tax law passed by the U.S. Congress and signed into law on Dec. 22 allows for the use of state-sponsored 529 savings accounts for K-12 tuition at private and parochial schools, Nebraska State Statutes do not provide favorable tax treatment unless those accounts are used for qualified higher education expenses at colleges, universities, community colleges, technical schools, or graduate programs.”

In direct contrast, Pennsylvania’s “PA 529 College Savings Program” explained that the program is working to ensure families may be able to process payments for K-12 expenses as they would for higher education, even though Pennsylvania’s individual taxes do not conform to the federal tax code.

States that are concerned about a potential reduction in state income tax revenue or shifting money from public to private schools will need to reconsider their definitions of educational expenses that qualify for state tax breaks.  Although withdrawals for K-12 tuition expenses are now exempt from federal income taxation, states have autonomy over their own state income taxation.  States should do everything possible, including amending or retaining federal conformity rules, to ensure expenses for private K-12 education remain non-qualified withdrawals. This would prevent the creation of a regressive state tax break for those making withdrawals for K-12 private and religious education.

States with 529 savings programs have the capacity to tailor the rules regarding their individual programs because these educational savings programs are state-administered.  The federal government’s newly expanded definition of “qualified higher education expenses” will likely decrease state income tax revenues.  In addition to costing the federal government $500 million over the next decade, the American Enterprise Institute forecasts that Indiana could lose $117 million in annual revenues while Pennsylvania could see a loss of $92 million per year.  Expanding the tax break to New York’s 465,000 students enrolled in private schools could cost the state $120 million per year.

This expansion would encourage income tax sheltering while allowing for public funds to be redirected toward private schools.  It is in states’ best interest to clarify that these programs are for college and university expenses.  There is no action necessary for states that have explicitly written that these educational savings programs are designated for college and university expenses.  States have the autonomy to levy taxes on “non-qualified withdrawals,” similar to federal law.  States conform to the federal tax system for simplicity, but also have the option of separating from it.  State legislators can “decouple” from the new federal provision by disallowing deductions for state income amounts withdrawn from 529 plans to pay for K-12 private and religious education.

But as outlined in Figure 1 earlier in this brief, state tax deductions for 529 withdrawals are not the only type of tax benefit that states offer on these plans. Most states also offer a tax deduction or credit for contributions into 529 plans, and all states with income taxes allow for a deferral of taxes on earnings within the plans.  Taxpayers using 529 plans to pay private K-12 education expenses will continue to receive these state tax breaks because there is no way for state tax administrators to know how any particular 529 contribution or earning will eventually be spent.  But once a 529 withdrawal is used for K-12 education expenses, states offering these contribution and/or deferral tax breaks should assess penalties on that withdrawal—just as they would on any other non-qualifying withdrawal—to recapture the state tax benefits the taxpayer received in the past.

Since their inception, 529 education savings plans were created to encourage long-term savings for higher education in the face of rising tuition costs.  While the details of these plans may not be perfect, their purpose is broadly popular and well established.

Late last year, with very little debate, Congress decided to radically change these plans by allowing taxpayers sending their children to K-12 private and religious schools to begin using them as a tool for reaping immediate tax rewards.  While states cannot prevent the federal government from exempting 529 withdrawals spent on private K-12 education from federal tax, they can and should ensure that taxpayers using 529 plans for this purpose will not be showered with state tax breaks as well.