Republican Senators Debate Size of “Pass-Through” Break, But Proposed Compromises Will Make No Difference to Anyone Who Is Not Well-Off

Download national and state-by-state figures showing the impact of the Senate tax bill assuming the different pass-through deductions being considered (17.4%, 20% and 27%)

Senators Ron Johnson of Wisconsin and Steve Daines of Montana want the tax bill on the Senate floor to be amended to offer a more generous tax break for “pass-through” businesses. These are the businesses that do not pay the corporate income tax but instead are taxed only on the personal income tax returns of their owners. The bill already provides an extremely large tax break, a deduction of 17.4 percent of income from a pass-through business, with certain restrictions.

There are reports that Sen. Johnson and Sen. Daines are pushing to have the break increased by allowing owners of these businesses to deduct 20 percent of this type of income or by some reports even up to 27 percent of it.

Using ITEP’s microsimulation model, we have estimated how all the provisions in the tax bill would impact each income group under three possible scenarios. The only thing different in each scenario is the size of the deduction for pass-through income: 17.4 percent (the deduction in the bill as this is written), 20 percent and 27 percent.

The graph below illustrates the average total tax break (the combined result of all the provisions in the tax plan) for each income group in 2019 under these three scenarios. As you can see, the size of the pass-through break makes no difference for anyone who is not well off. 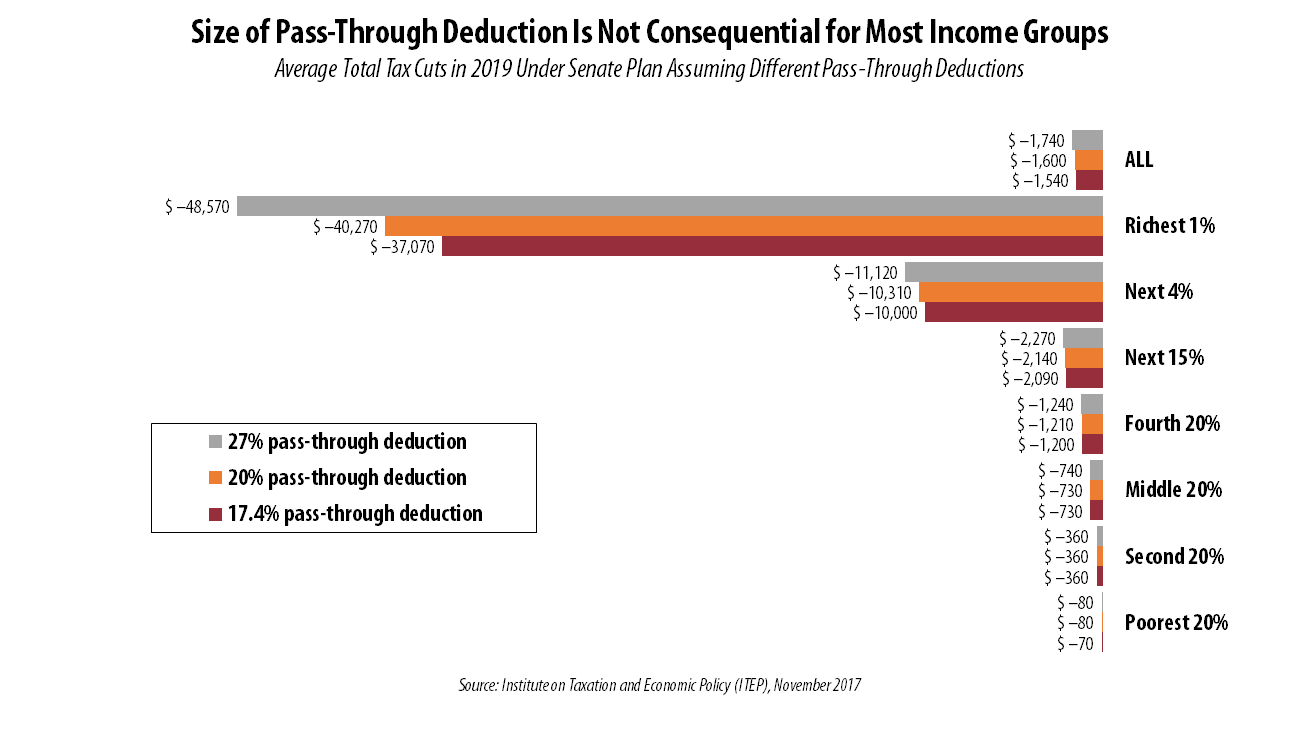 The average break for the richest one percent of taxpayers varies by thousands of dollars from one scenario to another because this group receives most of the income from pass-through businesses.

As ITEP previously found, the richest one percent get 60 percent of the benefits from the pass-through tax break in 2019 while the bottom three-fifths of taxpayers, who have incomes of $67,000 or less, only get two percent of the benefit.  Increasing the deduction does not budge who wins and who gets left behind from this provision.

Some people might refer to pass-throughs as “small businesses” but the truth is that they include law firms, hedge funds, accounting firms and even Bechtel, the largest construction and engineering company in the U.S. Tax breaks for pass-throughs benefit the owners of this type of business, not the mom-and-pop store on your street corner.