See the Updated 2013 Edition of this Brief

Sales taxes are among the most important—and most unfair—taxes levied by state governments. Sales taxes accounted for a third of state taxes in 2011, but sales taxes are regressive, falling far more heavily on low- and middle- income taxpayers than on the wealthy. In recent years, lawmakers thinking they might lessen the impact of these taxes have enacted “sales tax holidays” that provide temporary sales tax breaks for purchases of clothing, computers, and other items. This policy brief looks at sales tax holidays as a tax reduction device.

Sales tax holidays are temporary sales tax exemptions, applying to a small number of taxable items for a very limited period of time (usually two or three days). These holidays are usually timed to take place in August, during the traditional “back to school” shopping season. Since New York experimented with the fi rst sales tax holiday in 1996, well over a dozen other states have passed similar legislation (See chart on below for a list of 2012 sales tax holidays).

The majority of sales tax holidays include an exemption of clothing, though holidays for computers, school supplies, and other “back to school” expenses are also common. Separate holidays for energy efficient appliances are becoming increasingly common as well. Many holidays apply only to items below some specified price (e.g. clothing items worth over $100 are generally not exempted).

Advocates of sales tax holidays usually justify these tax breaks in a variety of ways, suggesting that sales tax holidays: make a state’s tax structure more fair, spur economic activity, and come with little cost to the states in terms of revenue and administrative difficulties. These justifications don’t hold up under closer examination.

Sales tax holidays do have advantages, of course. As previously noted, the biggest beneficiaries from any sales tax cut will be the low- and middle-income families affected most by sales taxes. In states that rely heavily on sales taxes, a sales tax holiday slightly reduces the overall collections from this unfair tax. But in the long run, sales tax holidays are too poorly targeted and temporary to meaningfully change the regressive nature of a state’s tax system. Policymakers seeking to achieve greater tax equity would do better to provide a permanent low-income sales tax credit. 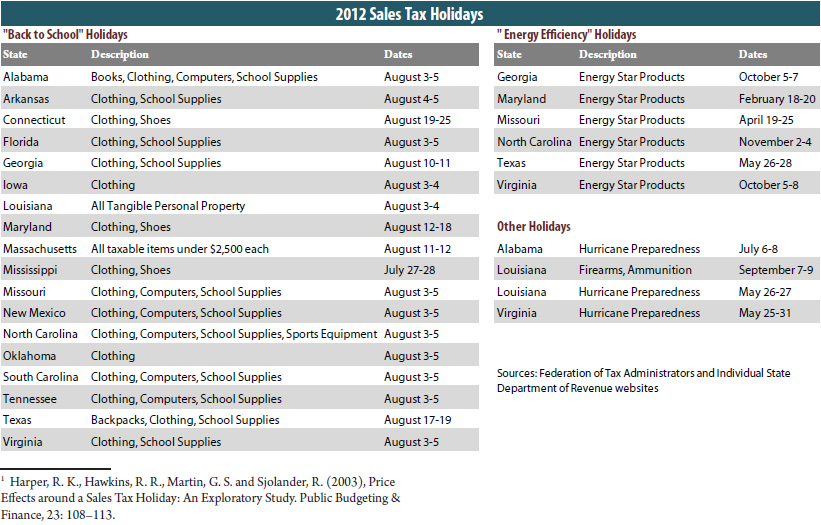