This brief was updated July 2018

Sales taxes are an important revenue source, composing close to half of all state tax revenues.[1] But sales taxes are also inherently regressive because the lower a family’s income, the more the family must spend on goods and services subject to the tax. Lawmakers in many states have enacted “sales tax holidays” (at least 16 states will hold them in 2017[2]), to provide a temporary break on paying the tax on purchases of clothing, school supplies, and other items. While these holidays may seem to lessen the regressive impacts of the sales tax, their benefits are minimal. This policy brief looks at sales tax holidays as a tax reduction device.

Sales tax holidays are temporary sales tax exemptions, usually applying to a small number of taxable items for a very limited period. These holidays are typically timed to take place in August, during the traditional “back to school” shopping season, and offer breaks on school-related items such as clothing, school supplies, and computers. However, a few states exempt all taxable goods during the holiday. Separate holidays for energy efficient appliances, guns and hunting season equipment, and storm preparation materials are becoming increasingly common as well. Most sales tax holidays last only two or three days, and almost all holidays apply only to items below some specified price (e.g. clothing items priced over $100 are generally not exempted).

The notion of a holiday was first introduced in 1980 when Ohio and Michigan opted to not tax the sale of automobiles for a period of time.[3] New York experimented with the current concept of sales tax holidays in 1996, but has since abandoned the policy. More than twenty states have enacted legislation at some point to provide holidays and proposals to extend the concept to more states and more types of purchases continue to appear each year.

But not all states are jumping on the popular sales tax holiday band wagon. Holidays in Georgia, Illinois, New York, North Carolina, West Virginia, and Vermont were either short-lived or repealed. Lawmakers in Indiana, Kansas, Maine, Nebraska, Rhode Island, Washington, and Wisconsin recently rejected new back to school holidays. And though these holidays have been particularly popular in the South, a counter-trend may be emerging as both Georgia and North Carolina recently decided not to reinstate their back to school holidays and Florida reduced its holiday from 10 to 3 days and limited the tax break to purchases of clothing under $60 and school supplies under $15.

Many states have either repealed or temporarily suspended sales tax holidays when facing significant revenue gaps. For example, lawmakers in Florida, Georgia, Maryland, Massachusetts and Washington D.C. all canceled holidays during the height of the Great Recession; and although most of these reinstituted them afterward, at the time of writing only Florida’s scaled-back holiday and Maryland’s holiday are planned for 2017. Louisiana has pared back its use of holidays considerably due to recent budget woes, suspending its hurricane preparedness holiday for 2016 and limiting it to a partial exemption in 2017 and 2018, and applying similar limits to its holidays for back to school shopping and hunting season for 2016 and 2017. Massachusetts also appears unlikely to approve its back to school holiday for the second year in a row in 2017 due to a significant revenue gap.

Policy makers tout sales tax holidays as a way for families to save money. On the surface, this sounds good. However, a two- to three- day sales tax holiday for selected items does nothing to reduce taxes for low- and moderate-income taxpayers during the other 362 days of the year. Sales taxes are inherently regressive. In the long run, sales tax holidays leave a regressive tax system unchanged, and the benefits of these holidays for working families are minimal. Sales tax holidays also fall short because they are poorly targeted, cost revenue, can easily be exploited, and create administrative difficulties.

In 2017, these holidays will cost states and local governments more than $250 million. Revenue lost through sales tax holidays will ultimately have to be made up somewhere else, either through painful spending cuts or increasing other taxes.

Unscrupulous retailers could take advantage of the shift in the timing of consumer purchases by increasing their prices or watering-down their sales promotions during the tax holiday. One study of retailers’ behavior during a sales tax holiday in Florida found evidence of precisely that: up to 20 percent of the price cut consumers thought they were receiving from the state’s sales tax holiday was actually reclaimed by retailers.[5]

Sales tax holidays are poorly targeted and too temporary to meaningfully change the regressive nature of a state’s tax system. Lawmakers must understand that they cannot resolve the unfairness of sales taxes simply by offering a short break from paying these taxes. If the long-term consequence of sales tax holidays is a higher sales tax rate, low-income taxpayers may ultimately be worse off as a result of these policies. Policy makers seeking to achieve greater tax fairness would do better to provide a permanent refundable low-income sales tax credit or Earned Income Tax Credit (EITC) to offset the impact of the sales tax on low- and moderate-income taxpayers. 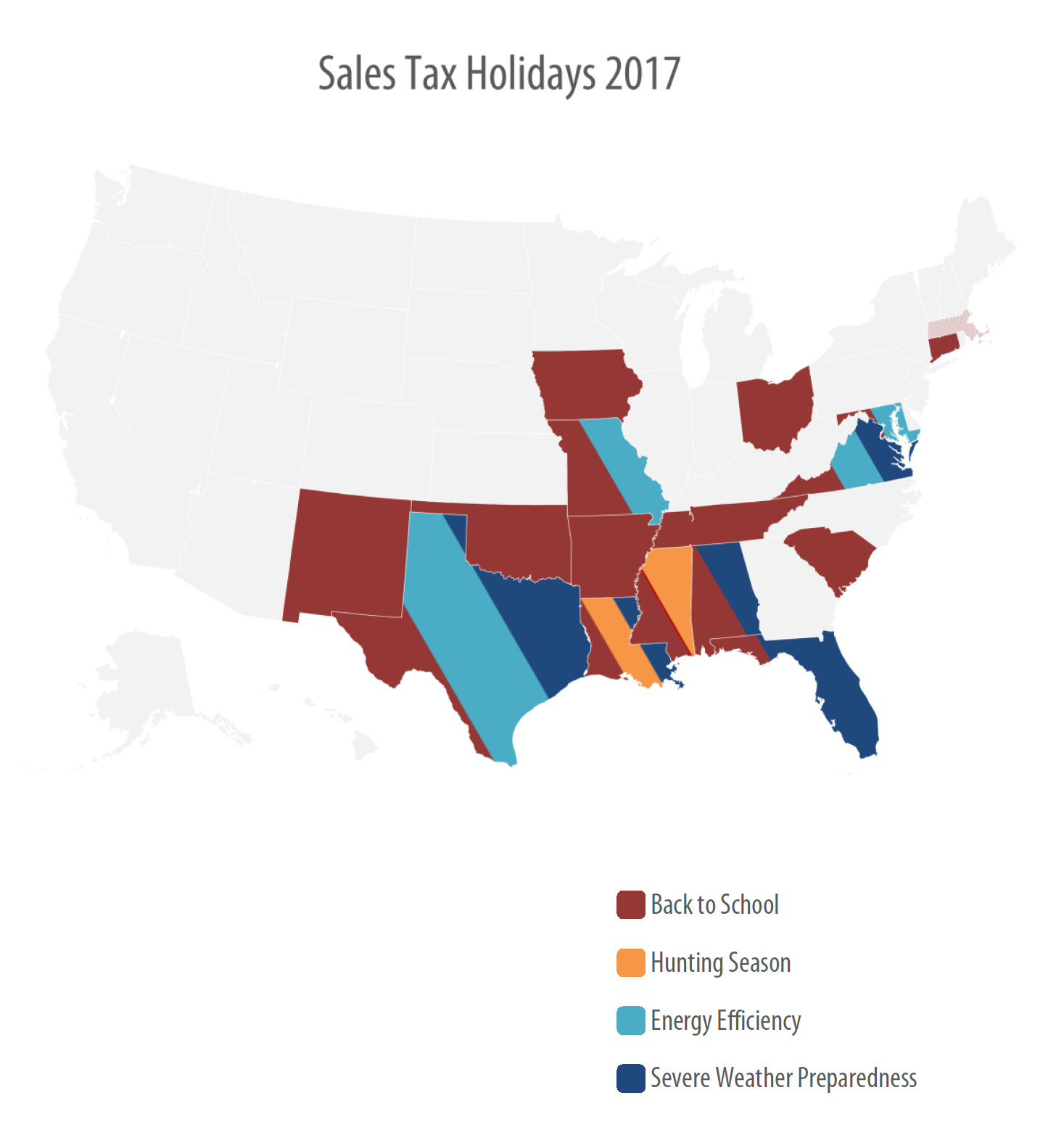 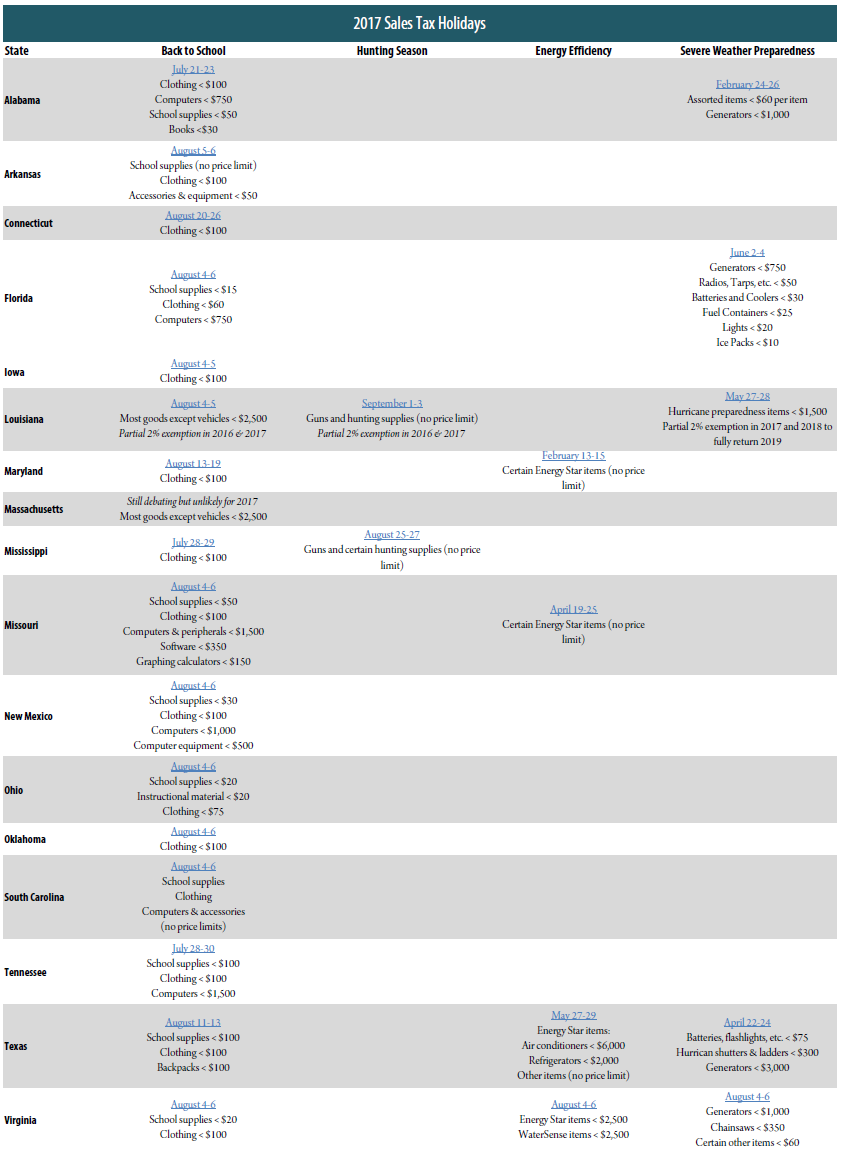 [2] Massachusetts lawmakers have to appropriate funding for their sales tax holiday each year, and as of the time of publication, the legislature is still in session and appears unlikely to approve a holiday for 2017.