A proposal to make permanent all the temporary provisions in the Tax Cuts and Jobs Act (Trump-GOP tax law) would largely benefit the wealthy and leave the lowest-income 20 percent of Americans paying higher taxes on average in 2026 than they would have paid if the tax plan were never enacted.

These findings come from a new 50-state distributional analysis by the Institute on Taxation and Economic Policy that examines the effects of the Trump-GOP tax law across all states and income groups in 2018 and 2026. The law cut taxes for individuals, estates, corporations and pass-through businesses.

To prevent the debt-financed cost of the new tax law from exceeding $1.5 trillion, Republicans in Congress wrote provisions benefiting low- and middle-income people to expire after 2025, while also including permanent provisions that raise taxes on these households (by changing inflation adjustments and changing the Affordable Care Act). At the same time, they made some tax cuts benefiting high-income households (such as corporate tax cuts) permanent. Without further legislative changes, the lowest-income 60 percent of Americans will face an average tax increase in 2026 while the top 20 percent will mostly continue to enjoy tax cuts.

Proponents of the tax law claim the solution to this gross inequity is to enact new legislation to extend or make permanent the provisions that will otherwise expire after 2025. They call this “extending the middle-class tax cuts.” But ITEP’s analysis finds that the average household among the poorest 20 percent would still pay higher taxes than they would have absent the TCJA. ITEP also finds that an extension would provide the biggest tax cut to the richest 5 percent of Americans.

“While rhetoric may bill this tax law and proposed extension as a middle-class tax cut, the data tell the real story: the Trump-GOP tax law was and remains a giveaway to corporations and the wealthy,” said Alan Essig, executive director of the Institute on Taxation and Economic Policy.

View the below table online: https://itep.sfo2.digitaloceanspaces.com/TCJAtable1.jpg 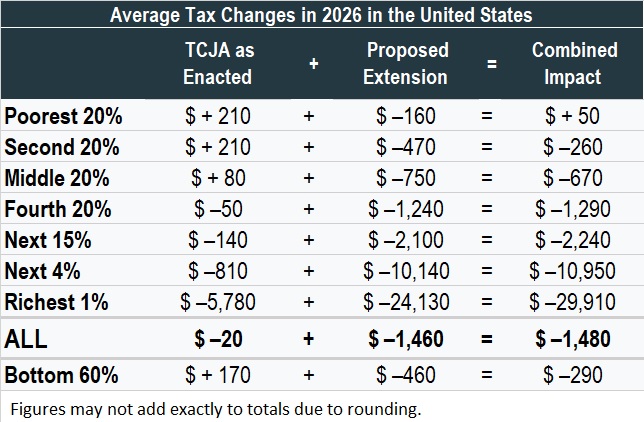