The U.S. Senate will soon be voting on a bill that would, among other things, allow so-called “pass-through” businesses to pay significantly lower taxes than their employees. Specifically, those businesses would be able to shelter up to 23 percent of their income from tax by making use of a special deduction for “qualified business income.” This type of change is the antithesis of tax reform. In addition to narrowing the federal income tax base, it would make the tax system significantly more complicated and harder to enforce, as taxpayers around the country are expected to seek out ways to repackage their earnings as “qualified business income” in order to become eligible for the break.

But under the Senate bill, the impacts would not be confined to federal law. Because most states base their income tax laws on the federal tax code, there is a serious risk that states will inherit this deduction as well, along with its myriad problems.

A preliminary ITEP analysis of three states that couple to federal income tax rules—Arizona, Maine, and Oklahoma—reveals that personal income tax collections would drop by 3 to 4 percent as a result of this break alone, resulting in a $304 million combined revenue loss for these three states. Of this amount, nearly two-thirds, or $203 million per year, would end up in the pockets of those states’ top 5 percent of earners. 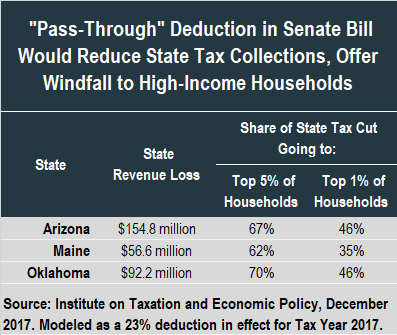 The nearby table offers an overview of these results, while the tables at the end of this article provide additional detail for each state.

Because the largest benefits of a state “pass-through” deduction would flow to highly profitable businesses, middle-income families could expect to receive very little from these changes. The middle 20 percent of Maine families, for instance, would see a state tax cut of about $6 per year on average, compared to $9 in Arizona or $15 in Oklahoma. High-income earners would receive average tax cuts of at least $2,000 per year, by contrast, with the most profitable businesses seeing cuts much larger than this amount.

While both the House and Senate tax bills would treat workers less favorably than business owners by extending special treatment to “qualified businesses income,” the Senate approach is uniquely flawed in that it runs the risk of inserting this giveaway into state tax codes as well. In the House bill, the special tax advantage offered to business owners would take the form of a series of lower tax rates, which will have no impact on state tax laws since every state sets its own tax rates. Only proposals that change the federal definition of income—as the Senate bill would do in creating a new deduction—have the potential to flow through to the states in this manner.

If the Senate “pass-through” deduction is enacted into law, dozens of states will be forced to confront the possibility of reduced revenue collections, more regressive tax codes, and increased tax avoidance.