State of Play: The Coming Debate Over the Ryan and Trump Tax Plans 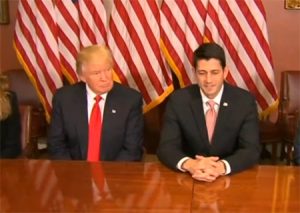 If the incoming Trump Administration and Republican-lead Congress have their way, fundamental changes to the tax code are afoot. The most important similarity between the Ryan and Trump tax plans are dramatic reductions in the corporate tax rate and across-the-board tax cuts whose benefits primarily flow to the richest Americans.

Because of their potentially catastrophic effect on federal revenue and tax fairness, neither plan should be the starting point for tax talks. Instead, lawmakers should  embrace tax reform plans that close down loopholes, increase the fairness of the tax code and raise more revenue.

One of the crucial dynamics in the upcoming debate over taxes will be whether Speaker Paul Ryan’s and President-elect Trump’s tax proposals can be combined in a way that will gain enough support from lawmakers to become law.

The plans have a lot in common, as this side-by-side comparison shows. Both Ryan and Trump would:

Ryan and Trump will still need to settle on the specifics of issues even where they embrace the same trajectory such as whether the corporate tax rate should ultimately be lowered to 15 (as Trump proposes) or 20 percent (as Ryan proposes).

There are a few areas in which the two plans differ meaningfully.

On corporate taxes, Ryan’s plan would eliminate the ability of companies to deduct interest, allow companies to immediately expense the full cost of their capital investments and enact a border adjustment which would exempt exports from taxation and not allow companies to deduct the cost of imports. In contrast, Trump would only allow full expensing (and disallow the interest deduction) for certain manufacturing firms. Also, Trump’s revised plan does not specify how it would deal with the treatment of international corporate earnings, though his original plan ended the ability of companies to defer taxes on these profits. In a recent interview, Trump specifically rejected the House GOP’s border adjustment plan, calling it too complicated, and arguing that its reliance on increasing the value of the dollar could be damaging to trade.

Another area where Trump’s plan is significantly different than Ryan’s is that it includes  substantial new tax breaks for dependent or childcare expenses. In fact, a top Trump representative is reported to have pushed Ryan to include these provisions during last week’s tax reform discussion between Ryan and the Trump tax team.

While the focus of the tax debate so far has been on Ryan’s and Trump’s tax plans, it is critical to remember that any tax plan must also go through the Senate. Unlike the House GOP, Senate Republicans do not have a blueprint detailed enough to serve as a starting point for tax reform legislation. The closest thing they have to a vision on tax reform is articulated in a lengthy primer (here’s a summary of the document) on tax reform put out by the Republican Senate Finance staff in December 2014.

The big initial question will be whether Senate leaders such as Majority Leader Mitch McConnell or Finance Chairman Orrin Hatch will use Ryan’s or Trump’s plan as a starting point for reform, or if they will start from scratch and create their own plans. It is important to note that the Senate is likely to face different pressures that the House because it will have a lot less room for party defections in a vote on tax reform. Specifically, tax reform legislation could be defeated in the Senate if as few as three Republicans Senators vote against it (assuming all Democrats vote against it). In contrast, the House could lose as many as 23 defections from their party and still pass legislation.

Regardless of the vagaries of legislative wrangling, the fact is that the majority of Americans do not support tax cuts for corporations and the wealthy. Recent polling shows that 64 percent of Americans think that corporations and upper income people are paying too little in taxes. In fact, only a tiny sliver of the population, less than 14 percent, share the belief of Ryan and Trump that the wealthy and corporations are paying too much in taxes. Even among Trump voters specifically, only 18 percent favor lower taxes on the wealthy and only 39 percent favor them for corporations, with significant majorities saying that they should stay the same or be raised.