In 2011, thirty one states and the District of Columbia allow a group of income tax breaks known as “itemized deductions.” Itemized deductions are designed to help defray a wide variety of personal expenditures that affect a taxpayer’s ability to pay taxes, including charitable contributions, extraordinary medical expenses, mortgage interest payments and state and local taxes. But, these deductions cost states billions of dollars a year while providing little or no benefit to the middle- and low-income families hit hardest by the current economic downturn. This policy brief explains itemized deductions and explores options for reforming these upside down tax breaks at the state level.

What are Itemized Deductions?

In general, the rationale for each itemized deduction is to take account of large or unusual personal expenditures that affect a taxpayer’s ability to pay. Itemized deductions are also offered as a way of encouraging certain types of behavior and include: charitable contributions; mortgage interest paid by homeowners ; very large medical expenses; and state and local income and property taxes. Most states require resident itemizers to add back any state income tax deduction in calculating their itemized deductions for state purposes.

Itemized deductions impact tax fairness: low-income families receive virtually no benefit from these deductions, and the biggest benefits are reserved for the upper-income families who arguably need them the least.

Each itemized deduction tax break is frequently defended as an important means of offsetting large household expenses that reduce a family’s ability to pay taxes. But because they are structured as deductions, they typically provide much larger tax breaks to the best off families than to middle-income taxpayers. This is because the tax cut you get from an itemized deduction depends on your income tax rate: imagine two families, each of which has $10,000 in mortgage interest payments that they include in their itemized deductions. If the first family is a middle-income family paying at the 15 percent federal tax rate, the most they can expect is a $1,500 federal tax cut from this deduction ($10,000 times 15 percent). But if the second family is much wealthier and pays at the 35 percent top rate, they could expect a tax cut of up to $3,500. 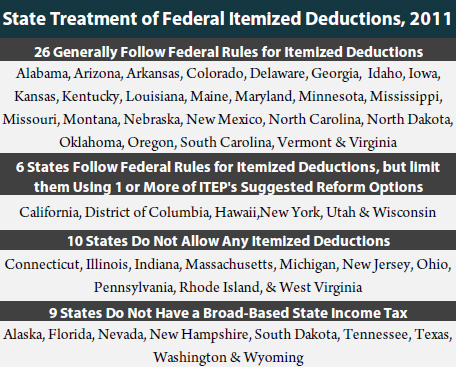 Thirty one states and the District of Columbia allow itemized deductions patterned after federal rules. 26 states closely follow federal guidelines for itemized deductions (with the exception of the federal deduction for state income taxes paid, which most states have sensibly chosen to disallow). Five other states and DC use the same federal guidelines, but impose their own limits on some (or all) of these deductions.

Reforming itemized deductions will make tax systems fairer and more sustainable at a time when they are badly in need of such changes. Itemized deductions are costly, “upside-down” subsidies for the best-off taxpayers, offering little or no benefit for many low- and middle-income families.