This policy brief explains two basic, but important tax policy terms- the tax base and tax rate. Since these concepts are often confusing, having a grasp on the ins and outs of tax bases and rates will help provide a better understanding of how all state and local taxes work. 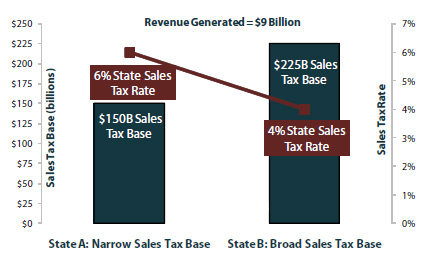 The tax base is all the items or activities subject to a tax. For any tax, it’s worth distinguishing between the potential tax base—the set of items that would be taxed if there were no special exemptions—and the actual tax base used by a given state. The potential tax base of a general sales tax, for instance, is everything that a state’s consumers purchase in a given year for their own personal use. But in every state levying a sales tax, the actual tax base is much smaller than that, because of exemptions for everything from groceries to haircuts.

But not all taxes are calculated based on value: excise taxes on cigarettes, gasoline and beer are usually calculated on a per-unit basis (See ITEP Brief, “How Sales and Excise Taxes Work” for more information).

Broad or Narrow Base?

Taxes are often described as having a broad base or a narrow base. A broad-based tax is one that taxes most of the potential tax base. For example, a broad-based sales tax is one that applies to almost all purchases of goods and services. A narrow-based tax applies to fewer items. Most states have a narrow based sales tax that applies only to goods, not services, and has exemptions for things like food, housing and medicine. At any given tax rate, a broad-based tax will raise more revenue than a narrow-based tax—because more is taxed.

The chart on this page illustrates this point. Both State A and State B raise $9 billion from their sales taxes. But, State A’s sales tax rate is 6 percent while State B’s sales tax rate is only 4 percent. This is because State A’s sales tax base to which the rate applies is $150 billion compared to $225 billion in State B. This example illustrates an important tradeoff: the broader the tax base, the lower the tax rates can be. And the narrower the tax base, the higher the tax rate must be in order to fund a given level of public services.

A broader base also makes it more likely that the tax system will treat all economic activities the same, which helps ensure that the tax system will not discriminate in favor of some taxpayers and against others. For example, a state that collects sales tax on the purchase of goods from a store, but not on purchases made over the Internet, is choosing to favor one type of economic activity over another (See ITEP Brief, “How Can States Collected Taxes Owed on Internet Sales?”). Broadening the sales tax base to include Internet-based sales ensures that the neutrality principle is followed, and makes the sales tax rules less discriminatory.

But sometimes there are good reasons for having a narrower base. Excluding food from the sales tax, for example, makes that tax less regressive. Many people argue that the benefit of making the tax less unfair outweighs the revenue loss from narrowing the sales tax base.

Multiplying the nominal tax rate -the actual legal rate that is multiplied by the tax base to yield the amount of tax liability, or taxes owed- times the tax base gives the amount of tax collected. Usually, the tax rate is a percentage. For example, if a state’s sales tax rate is 4 percent on each taxable purchase and a consumer purchases $100 of taxable items, then the total amount of sales tax collected will be $4 (4 percent of $100).

Not all tax rates are percentages. A typical gasoline tax rate, for example, is expressed in per-gallon terms. So if a state has a gasoline tax rate of 10 cents per gallon and 100 million gallons of gasoline are sold, then the tax collected will be $10 million (10 cents multiplied by 100 million). Property tax rates are traditionally measured not in percentages but in mills (See ITEP Brief, “How Property Taxes Work”).

This approach is better because it measures tax liability in a way that takes account of differences in the tax base. In this example, by comparing these effective rates we are able to see that, even though State A and State B have the same nominal rates, the tax is really higher in State B because State B has a broader base. When we divide tax payments by personal income, as in the example above, we’re calculating the effective tax rate on income. Effective tax rates can be calculated in other ways, too. For example, the property tax on a home can be expressed as a percentage of its market value. But what if we want to measure the tax compared to what the homeowner can afford? The owner of this home could be out of work—or could have just gotten a huge raise.

Discussions around tax bases and tax rates can seem very convoluted and confusing. Tax bases and the rates that apply differ on the tax being discussed. Yet, understanding the relationship between a specific tax base and the rate that applies after exemptions and deductions is critical to understanding how all state and local taxes work.