Our ever-changing economy demands that lawmakers update our tax laws to keep pace.

Take, for example, the growth of online sales. As recently as six years ago, Amazon, the nation’s biggest online retailer, only collected sales tax on consumer purchases in five states. This meant that state treasuries were missing critical sales tax revenue, a problem destined to grow as more consumers shifted their shopping habits from brick and mortar stores to online purchases.

But Amazon’s tax collection habits have improved over the last few years, in part because Amazon changed the way it does business, but also because state lawmakers became increasingly frustrated by the sales tax revenue gap created by e-retail and decided to press for change. While online sales tax evasion remains a problem today, progress is being made.

Now, states are facing another challenge as the on-demand or “gig economy” grows. Companies such as Uber and Airbnb are presenting regulatory challenges and the growth of these services has outpaced lawmakers’ ability to update state and local tax codes. A new ITEP report explores tax policy issues related to the on-demand economy and recommends that state and local tax systems treat these companies in a manner similar to their competitors, especially taxis and hotels.

As background, most states exempt a broad range of services from their sales tax bases because of a historical accident. The revenue loss resulting from these exemptions—on services ranging from lawn care to haircuts—has grown substantially as the service sector has expanded, but lawmakers have been slow to update sales tax bases to reflect the shift toward a more service-oriented economy.

Taxi rides are one service that has long been among those typically exempt from most state and local sales taxes, but there are more than half a dozen states that apply their sales taxes to taxis and similar services. In the context of the on-demand economy, this matters because Uber and other transportation network companies (TNCs) are providing a service nearly identical to taxi rides. But their tax treatment has not always reflected this fact.

In Rhode Island, for example, taxis began collecting sales tax under a law enacted in 2012, but Uber delayed doing so until 2015, claiming the law was ambiguous. Today, the company has taken an even more confrontational stance in Georgia, urging its riders to tell lawmakers that the sales tax, which has long been collected on taxi rides, should not apply to Uber’s services. ITEP’s report indicates that a similar battle could soon come to Ohio, where taxis also collect sales taxes but where Uber appears not to be doing so. Uber has recently received negative publicity on a variety of fronts, ranging from allegations of sexual harassment among its engineers to reports of software designed to impede police investigations into its business in jurisdictions where it may have been operating illegally. Disputes over sales tax collection may seem bland by comparison, but they are important nonetheless. 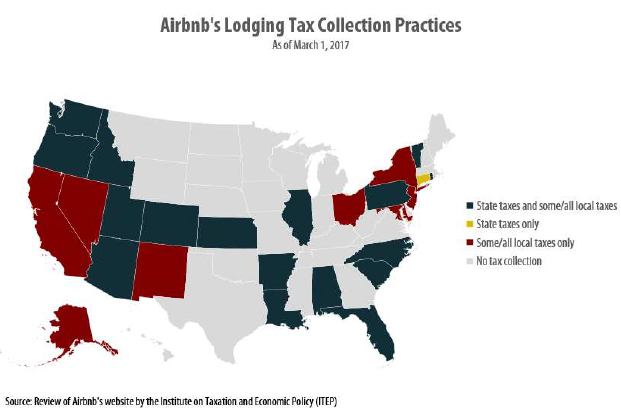 Airbnb has taken a different approach to state and local tax collection. The company has often been willing to collect and remit lodging taxes (which range up to 15 percent) in exchange for regulations (or a lack thereof) favorable to its business model. Affordable housing advocates concerned about the loss of residential housing, and frustrated neighbors living next to what they call “neighborhood hotels,” by contrast, would like to see tighter restrictions on renting homes via Airbnb. Meanwhile, others have noted (PDF) the enforcement problems created by the high level of secrecy surrounding most Airbnb tax collection agreements.

Partly because of these ongoing debates, Airbnb’s tax collection practices are a patchwork. The company is collecting some state and/or local-level lodging taxes in 26 states, but in many of those states the company’s scope of collection is far from comprehensive. Hundreds of millions of dollars in lodging taxes are being lost each year as visitor preferences shift away from traditional hotels (which collect the applicable taxes) to Airbnb rentals (which often do not). For the time being, many of Airbnb’s customers are allowed to pay less than guests of traditional hotels for the public services they enjoy during their visits.

These issues are likely to remain a work in progress for some time to come. The regulatory questions that are often tied to these tax debates are far from trivial. And even if the tax laws related to these services are updated to reflect today’s economy, there is little doubt that new on-demand services with unforeseen tax policy implications will arise in the years ahead.

Nonetheless, the stakes are too high for lawmakers to delay action any longer. Both tax fairness and fiscal responsibility demand that states and localities update their tax codes to better reflect the realities of these on-demand services. Amazon and the e-retail industry are moving in that direction, though universal sales tax collection remains elusive. As a similar debate unfolds regarding the gig economy, states should move even more quickly to recognize change and update their sales tax practices accordingly.

Read Taxes and the on-Demand Economy.