It’s only appropriate that April 1 will mark a new milestone in foolish federal transportation infrastructure policy.

On Saturday, the nation’s federal gasoline tax rate will have been stuck at 18.3 cents per gallon for 8,584 days in a row—or more than 23.5 years. This surpasses the previous record of 8,583 days without an update set on March 31, 1983—the day before lawmakers more than doubled  the federal gas tax from 4 to 9 cents, under legislation signed by President Ronald Reagan. (A full history of federal gas rates is available in Figure 1.) Now that infrastructure funding is back on the agenda in Congress, revisiting this extraordinarily outdated area of the tax code is a logical place to begin the search for revenue. 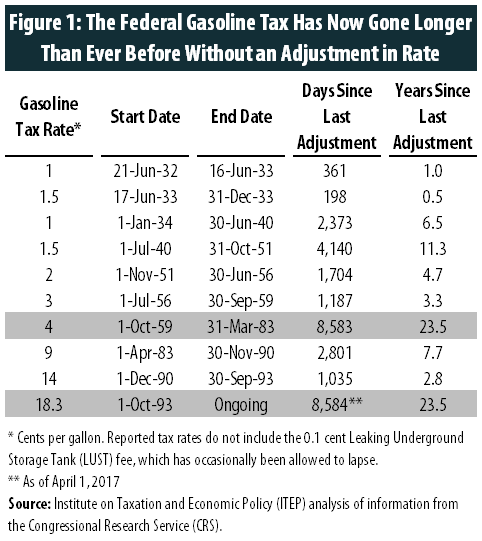 Frequent updates to the gas tax are critical to ensuring that the tax retains its purchasing power over time. Just as a business that refused to raise its prices for 23 years would likely find itself facing financial difficulties as its costs grew, the federal government is finding it increasingly impossible to fund a 21stcentury infrastructure with a gas tax rate set in the first year of President Bill Clinton’s Administration.

Figure 2, below, shows that the cost of building and maintaining our nation’s roads has risen by 62 percent since 1993. As asphalt, machinery, labor, and other inputs have become more expensive, an infrastructure project that could have been completed for $4 million in 1993, for example, would cost closer to $6.5 million today.

At the same time, most consumers are now paying less gas tax per mile driven than in 1993 because vehicles have become more fuel-efficient. While the average light duty vehicle could travel 19.3 miles per gallon in 1993, that figure crept up to almost 22 miles per gallon in 2015 (the most recent year for which data are available). This 14 percent improvement means that most drivers are now able to travel further on each tank of gas before they must refuel and pay any gas tax to fund the roads on which they have been driving. 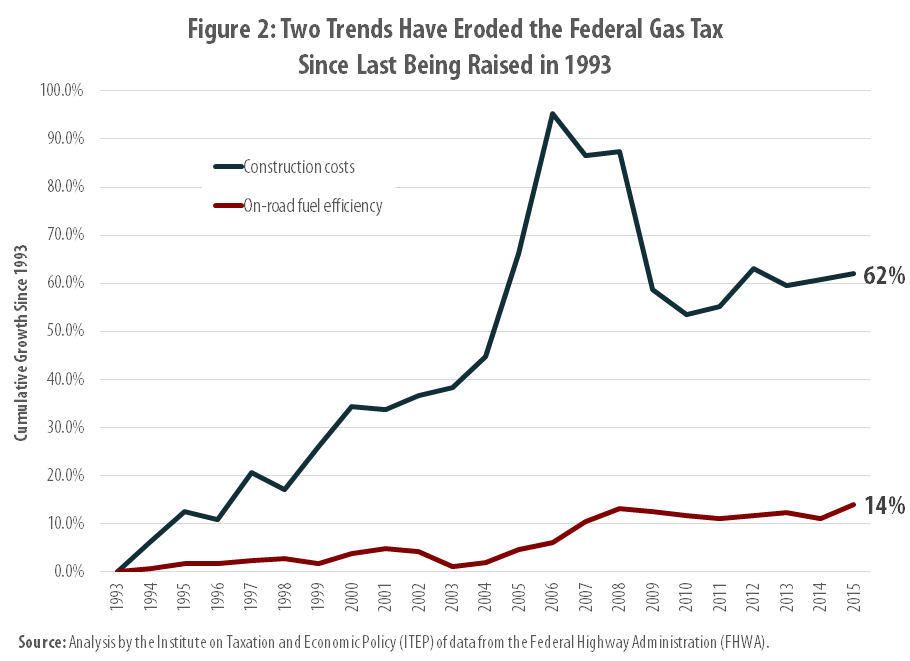 Congress isn’t doing the American public any favors by refusing to update the very low, and very outdated federal gas tax. The extra potholes and traffic congestion that come with an underfunded transportation network are a major drain not only on the national economy, but on individual drivers’ pocketbooks and free time. The American Society of Civil Engineers (ASCE) reports that traffic congestion alone is costing consumers the equivalent of $160 billion in wasted time and fuel every year.

If there’s one bright spot in this story, it’s that state lawmakers have increasingly realized that a higher gas tax is a price worth paying to improve infrastructure. Since 2013, 19 states have raised or reformed their gas taxes, and more than a dozen additional states are considering doing the same right now. If Congress took a page out of state lawmakers’ playbooks, the nation’s infrastructure would be better off for it.