The Framework’s Tax Increases and Tax Cuts by State

The Republican majority in the House of Representatives is, according to reports, having some trouble rounding up votes to pass its budget because some members of the caucus have concerns about the tax reform legislation that this budget is intended to facilitate. Specifically, households in some states rely more heavily than others on the deductions that would be repealed under the “framework” for tax reform that the Trump Administration and Republican leaders in Congress released on September 27. As our report on the framework explained, the result is that in nine states plus the District of Columbia, more than a fifth of households would pay higher taxes.

It’s true that in each state, more families would see a tax cut rather than a tax hike. But it’s also true that those who would pay more would be financing enormous tax cuts for the richest 1 percent, who would benefit far more than any other income group.

The table below provides a summary of the data from our report for the ten states with the highest percentage of residents paying more taxes under the framework. State-specific reports with more information are available by clicking on the map below the table. Also, ITEP’s longer report on the framework includes national figures. 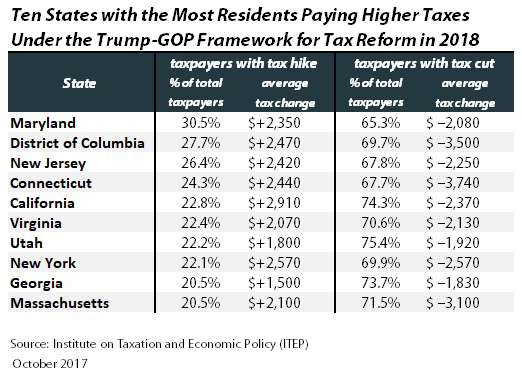