The Walmart Smiley Face Is Lying: Corporate Tax Cuts Are Not Causing Pay Raises and Bonuses

Last night, Yahoo reported that 81 corporations had announced pay raises and bonuses that they claim result from the Trump-GOP tax law’s reduction in the official corporate tax rate from 35 percent to 21 percent.

Of these 81 corporations, 13 were included in ITEP’s most recent corporate tax study, which focuses on the Fortune 500 companies that were profitable every year from 2008 through 2015. These 13 companies had a combined effective tax rate of just 19.1 percent, which undermines the idea that the federal corporate tax rate was holding back their ability to pay workers. 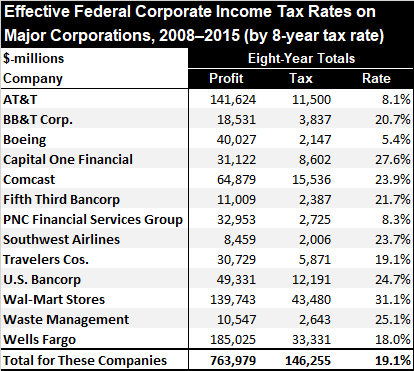 While corporations carped for years that the official federal corporate tax rate of 35 percent was too high, ITEP studies revealed that corporations’ effective tax rates — the share of profits they pay in taxes after all their breaks and loopholes are factored in — was almost always much lower. Among profitable Fortune 500 companies, the average effective tax rate from 2008 to 2015 was 21.2 percent—essentially on par with the statutory rate under the new law.

But many corporations paid substantially less, including the 13 that announced pay raises and bonuses. Among this group, the very lowest effective tax rates were enjoyed by Boeing (5.4 percent) and AT&T (8.1 percent). Amazingly, in the months leading up to the tax debate, Republican leaders held up these low-tax companies as ones that needed tax breaks.

In August, House Speaker Paul Ryan visited a Boeing facility in Washington State, and House Ways and Means Chairman Kevin Brady visited AT&T’s headquarters Texas. Ryan and Brady told Boeing and AT&T workers that their employers would be able to boost pay once Congress cut the corporate tax. They did not mention that both companies had already enjoyed enough breaks and loopholes to drive their effective corporate tax rates down to single digits.

To be fair, effective tax rates do vary among these 13 companies. The very highest was paid by Walmart, which announced pay raises and bonuses yesterday but also revealed that it is closing 63 of its Sam’s Club locations, which could affect more than 11,000 jobs. As ITEP points out in another post, the $300 million the company will spend on the wage boost is just a fraction of the estimated $2 billion or more a year that Walmart could net from the corporate tax rate cuts. Walmart is also competing with Target’s $11 starting wage and has already been raising wages in recent years as the economy improves.

Claims that pay raises, bonuses and new investment are linked to the tax cut are  a transparent campaign by corporate America to retroactively sell the historically unpopular Trump-GOP tax law. Corporations and their anti-tax allies fear that the next Congress won’t want to leave the law in place, and the public won’t either. Their fears are well-founded.