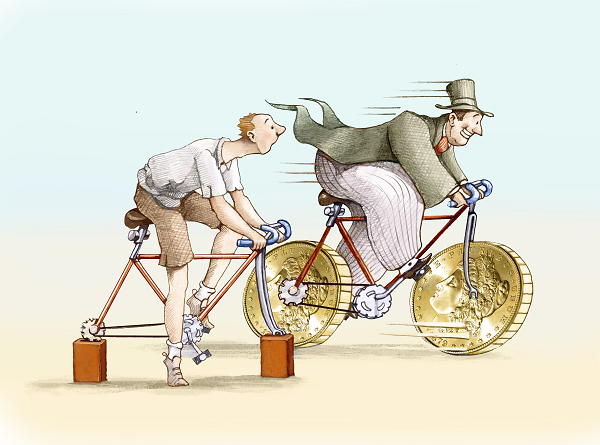 The scrawls in the margins of the hastily written 500-page Senate tax bill had barely dried when lawmakers began to reveal the true motivation behind their rush to fundamentally overhaul the nation’s tax code.

Sen. Chuck Grassley, who was the most candid of all, told the Des Moines Register that eliminating the estate tax, “recognizes the people that are investing, as opposed to those that are just spending every darn penny they have, whether it’s on booze or women or movies.”

This contemptuous statement could easily be dismissed as Sen. Grassley having a fleeting case of foot-in-mouth disease, except it aligns squarely with what many other Republican leaders have said about people who don’t have the good fortune of inheriting wealth. On the Senate floor last Thursday when taken to task over the Children’s Health Insurance Program, Sen. Orin Hatch in the same breath praised the program but also said, “I have a rough time wanting to spend billions and billions and trillions of dollars to help people who won’t help themselves – won’t lift a finger – and expect the federal government to do everything.”

And recall earlier this year when the GOP was attempting to dismantle Obamacare that former U.S. Rep. Jason Chaffetz asserted low-income people could afford higher health insurance premiums if they simply resisted spending hundreds of dollars on new iPhones.

All of these statements are consistent with the misguided, right-wing idea that lack of copious financial resources is due to personal shortcomings. But the truth is many working people struggle to get ahead within a system designed to reward wealth over work.

And with this rapidly moving tax legislation, the Republican leadership is on a damaging path to further rig the system. The public understands this, which is why this plan is deeply unpopular.

Multiple independent analyses have revealed that both the House and Senate tax cut plans would be a boon for the wealthy while providing, on average, a 1 percent income boost for those middle-class taxpayers lucky enough to receive a cut at all. Both plans would hike taxes for some low- and middle-income people either right away or within the next decade. The Senate plan adds insult to injury by partly paying for tax cuts for corporations and the wealthy with a cynical gamble that millions of low-income people will forego health coverage and the government will save on subsidies as a result.

Meanwhile, these lawmakers continue to proudly claim that their tax plan will be the biggest tax overhaul in a generation. This may be true. But it’s also true that this tax plan is a gross abuse of our tax code to carry out a massive, upward transfer of wealth at a time when the chasm between rich and poor is growing wider and income already is concentrating at the top.

To be crystal clear, the rich are doing just fine. They recovered from the 2007-2009 recession more quickly than everyone else, reaping the vast majority of the economic gains. But apparently elected officials believe the already-rich don’t have enough.

The tax plan was never intended to benefit the middle class, rather it is part of a broader agenda to reduce taxes as much as possible–especially for the rich and corporations–and shrink government spending on programs that don’t provide direct benefits to the rich.

Musings about controlling spending have already started. Sen. Marco Rubio last week told reporters that Congress will need to cut entitlement programs such as Social Security. “We have to generate economic growth which generates revenue, while reducing spending. That will mean instituting structural changes to Social Security and Medicare for the future,” he said. [Side note: GOP leaders have decoupled payroll taxes from this debate as if somehow ALL working people aren’t paying Social Security and Medicare taxes and should rightly expect to get something out of the system when the time comes.]

House Speaker Paul Ryan said in 2018 he wants Republicans to focus on reducing spending on government programs. And on more than one occasion, President Trump has said “welfare reform” is next.

Passing deficit-financed tax cuts with a keen eye on later slashing funding for retirement security and health care demonstrates the White House and congressional leaders are willing to loot the economy for the rich and, quite literally, make working people pay for it.

Although it hasn’t stoked considerable public outrage, a provision in the Senate bill would allow oil and gas companies to drill in the Arctic National Wildlife Refuge, a more than 30,000-square-mile pristine nature reserve. Conservationists have argued the refuge should be preserved not just for current generations, but for our future.

Allowing profitable oil and gas firms to exploit our environment to extract more profit at our expense is the perfect metaphor for this entire process. GOP leaders have written a tax bill that will allow corporations and the wealthy to extract as much wealth as possible from our economy without regard for the rest of us or our future.