There are a lot of troubling components of the tax reform packages being proposed by President-Elect Donald Trump and the House GOP, but one that especially stands out is the push to give companies a tax break on the earnings they are holding offshore. Unfortunately, proposals rewarding the nation’s most egregious tax dodging multinational corporations with hundreds of billions in tax breaks represent an area where lawmakers on both sides of the aisle seem to agree, making it a potential area of movement if broader tax reform efforts flounder.

Fortune 500 corporations collectively hold $2.5 trillion offshore. As long as corporations keep this money offshore, this massive stash remains an untapped source of tax revenue because a loophole in the tax code called deferral allows companies to avoid taxes on profits until they “repatriate” or bring those profits to the United States. Rather than requiring corporations to pay the full 35 percent rate (minus foreign tax credits) that they owe, lawmakers have introduced various proposals to lower the repatriation tax rate to 20, 8.75 or even 0 percent. Some of these proposals have bi-partisan support.

Corporations are avoiding up to $720 billion in taxes through this offshoring strategy. With such a significant sum at stake, any reduction in the repatriation rate would be a bonanza for multinational corporations. For example, under President-elect Trump’s revised tax plan, companies would be required to pay a 10 percent rate on their offshore earnings, meaning that they would get a 70 percent discount from the current rate owing an estimated $206 billion in taxes. In other words, President-elect Trump is proposing to give companies a $514 billion tax break on their accumulated offshore earnings.

A new ITEP report examines the benefit to the 10 companies with the most money offshore: Apple, Microsoft, Oracle, Citigroup, Amgen, Qualcomm, Gilead Sciences, JP Morgan Chase & Co., Goldman Sachs Group, and Bank of America Corp. The top 10 companies account for $182.8 billion of the potential $720 billion in tax revenue and would receive a $130.6 billion tax break under President-elect Trump’s proposal.

Giving companies a discounted tax rate of 10 percent on repatriation, or any rate below 35 percent, would disproportionally benefit companies that have most aggressively stashed profits offshore. For instance, Apple would receive a tax break of $48.1 billion on its $216 billion in unrepatriated earnings. Similarly, Microsoft would see a $28.1 billion break on its $124 billion in unrepatriated earnings. Wall Street firms such as Citigroup, JP Morgan and Goldman Sachs would receive breaks of $9.1, $5.9 and $4 billion respectively.

A one-time tax break on offshore earnings would provide a quick infusion of revenue, which is likely why lawmakers on both sides of the aisle have backed the idea. Many policymakers, including advisors to President-elect Trump, would like to use this one-time revenue to fund additional infrastructure investment. Alternatively, some conservatives would like to use any one-time repatriation revenue to help make lowering corporate tax rates appear revenue-neutral in the short term, even if over the long term the rates will lose revenue.

Rather than rewarding tax avoidance for a short-term revenue boost, lawmakers should pursue legislation that would require companies to pay the full $720 billion they owe on their unrepatriated earnings. In addition, Congress should end offshore tax avoidance once and for all by no longer allowing companies to indefinitely defer paying taxes on their foreign earnings. These two policies would be a huge win for the American public, raising hundreds of billions in much-needed revenue for public investments and making our tax system fundamentally fairer. 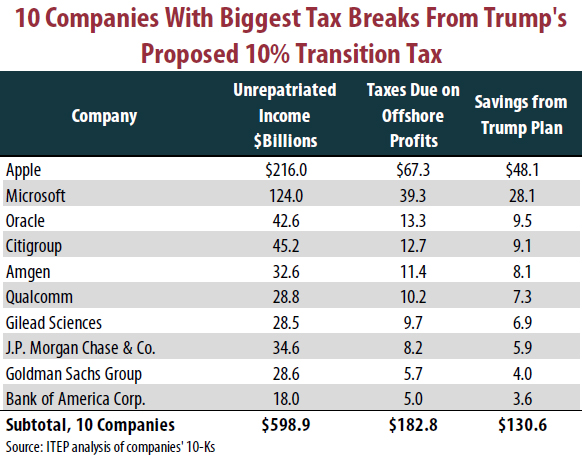