Updated Estimates from ITEP: Trump Tax Law Still Benefits the Rich No Matter How You Look at It 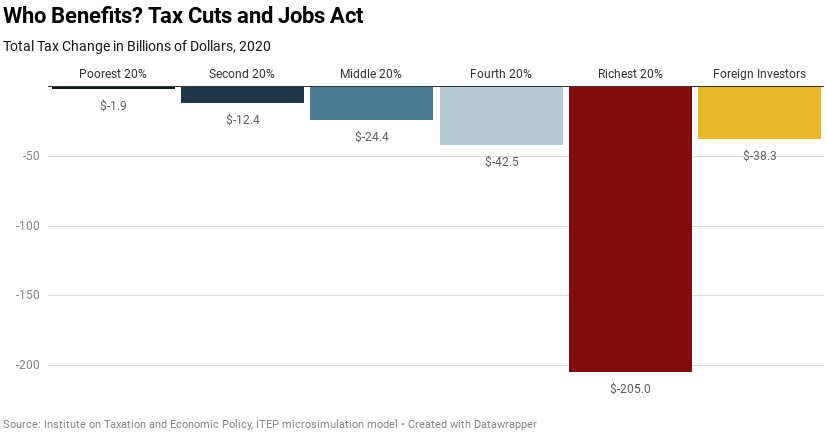 President Trump’s allies in Congress continue to defend their 2017 tax law in misleading ways. Just last week, Republicans on the House Ways and Means Committee stated that most “of the tax overhaul went into the pockets of working families and Main Street businesses who need it most, not Wall Street.”

ITEP also estimates that in 2020 another $38 billion will go to foreign investors, who benefit from TCJA’s corporate tax cuts.

These distinctions are interesting but do not ultimately reveal who benefits from the tax law. All taxes are paid by people, either directly (as is true of the personal income tax) or indirectly (as is true of the corporate income tax). Just as taxes are paid by people, tax cuts benefit people, either directly or indirectly. In the case of TCJA, most benefits go to the well-off.

ITEP’s detailed estimates of TCJA, which can be downloaded at the top of this page, break its impacts into several components.

For example, one component of TCJA is its corporate tax changes. As explained in an earlier report, ITEP uses the same methodology as Congress’s official revenue estimators, the Joint Committee on Taxation (JCT), to determine which taxpayers ultimately benefit from a corporate tax cut. Following JCT, ITEP assumes that all corporate tax cuts go to shareholders (who are mostly high-income households) in the first year and then, over time, a fraction goes to workers because corporations hire more Americans and pay better. (It is unclear whether this would happen in real life so this should be thought of as a best-case scenario.) A significant portion also goes to foreign investors who own shares in American corporations.

The result is that in 2020, TCJA’s corporate tax changes will provide $77 billion in tax cuts to U.S. taxpayers and $38 billion to foreign investors. Of the portion going to U.S. taxpayers, $34 billion will flow to the richest 1 percent.

Another component is what ITEP calls provisions for families and individuals. This includes most of what ordinary people think about when they file their federal income taxes: changes in the standard deduction, the elimination of personal exemptions, changes in tax brackets and rates, the new $10,000 limit on deductions for state and local taxes (SALT), changes to the Child Tax Credit, etc. This category of changes, taken together, disproportionately benefits the richest 20 percent.

However, changes for families and individuals are less beneficial to the richest 1 percent, because one provision in this category, the new cap on SALT deductions, limits the benefits for the very rich. But, the vast majority (91 percent) of taxpayers within the top 1 percent still receive large tax cuts overall because of the corporate tax cuts, pass-through tax cuts, and estate tax cuts.

It is possible to break down the effects of TCJA in many different ways, but it’s not possible to avoid the conclusion that its benefits mainly go to the well-off and foreign investors.