Who Is “America First” Under the Tax Plan? The Rich First, Foreign Investors Second, Then the Rest of Us.

In his inaugural speech, President Trump told the world that Washington would be driven by a principle of “America First.” But the tax plans moving through Congress only put the richest Americans first. Everyone else comes after foreign investors.

Using data from ITEP’s recent report on the tax legislation, the graph below splits taxpayers into five equal groups and adds a sixth group, which is foreign investors. The graph illustrates how much of the House tax bill’s benefits goes to each group.

The richest one-fifth of Americans would get $176 billion in 2019 under the House bill (and nearly half of this goes to the wealthiest 1 percent). Foreign investors get $50 billion in 2019. Each of the other groups receives less.

Why do foreign investors benefit so much from the tax bill? One could be forgiven for skipping the lengthy methodology sections of our reports where this is explained in detail, so here’s the short answer. The biggest changes in the tax legislation are for corporations, including a steep cut in the corporate tax rate along with several smaller changes. This would mainly benefit those who own American corporations — the shareholders. 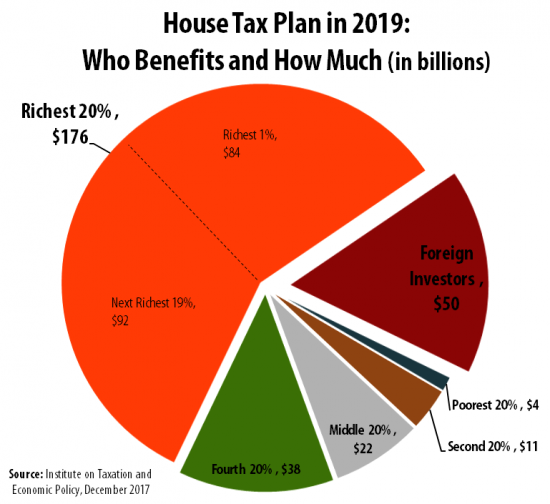 Recent research by Steven Rosenthal at the Tax Policy Center found that 35 percent of stocks in American corporations are owned by foreign investors, which is why they end up with a huge share of the benefits from this legislation.

Some economists believe that, eventually, some benefits of a corporate tax cut will go to workers because corporations will use their savings to pay higher wages. This is a highly questionable assumption but ITEP nonetheless follows the approach of Congress’s official revenue-estimators in assuming that a fourth of the benefits would flow to workers by the end of the decade.

But even then, three-fourths of corporate tax cuts would still go to shareholders, and 35 percent of those shares are owned by foreign investors, who would continue to benefit from the tax plan in the future. ITEP’s most recent report on the legislation finds that even in 2027, foreign investors will receive $34 billion. Of the five groups of Americans, all except the rich would receive less than this.

We’ll leave it to others to debate whether Trump’s principle of “America First” makes any sense. But we can say for sure that this tax legislation fails to live up to this principle, unless “America” really means the nation’s and the rest of the world’s rich.