With many states currently facing budget shortfalls—whether due to weak economic recovery after the Great Recession, struggling commodity prices, or self-inflicted tax cuts—and all states bracing for possible federal budget cuts in areas from education to health care to infrastructure, states are unlikely to be able to continue providing high-quality services to their residents without raising new revenue. In this context, states must find ways to generate additional revenue without increasing taxes on individuals and families who are already struggling to make ends meet and may bear the biggest brunt of federal funding cuts.

How the deduction for federal income taxes works

In tax year 2017, the six states offering a deduction for federal income taxes paid will, collectively, lose about $3.8 billion because of this feature in their tax system, with losses ranging from $61 million in Montana to $1.1 billion in Louisiana (Figure 2). Such losses constitute a meaningful share of total income tax revenue, particularly in states that have no cap on the value of the deduction.

States that offer this deduction are especially susceptible to federal tax changes, and in an era of great federal uncertainty this makes it difficult for states to plan ahead. Upper-income tax cuts at the federal level would reduce the cost of this tax cut for the states that offer it, while any future efforts to improve federal funding and tax progressivity would add to the cost for the states. The six states that offer the deduction already went through such a series of swings in recent years, as Bush-era temporary tax cuts were enacted and then unpredictably restored, allowed to expire, or replaced with new policy—all while the Great Recession and its aftermath also wreaked havoc on state budgets.

It is also worth noting that much of the lost revenue from this deduction leaves the state altogether. Because taxpayers can also deduct their state income taxes from their federal taxable income, states that give this break to their upper-income residents indirectly raise those same residents’ federal tax bills because they have less to deduct on their federal forms. For example, Alabama’s $732 million deduction means that federal income taxes on Alamabians are $145 million higher than they would be absent the deduction. Therefore, if Alabama were to repeal its deduction, the higher state taxes that wealthy Alabamians would pay would yield an $145 million federal tax cut—$145 million that would stay within the Alabama economy.

Because the deduction for federal income taxes is structured differently from state to state, the impact on tax fairness varies somewhat. But in every one of these states, the deduction offers little or no benefit to most low- and middle-income families. Of the $3.8 billion these six states give away through this tax break, only about $17 million—less than one half of 1 percent—goes to the lowest-income 20 percent of families. This shouldn’t be surprising. After all, the federal income tax is designed to shelter low-income families from tax. The availability of exemptions, deductions and credits means that many families simply do not have any federal income tax to deduct.

The extent of this unfairness and the variability in cost are shown in Figure 2. In the three states where the deduction is uncapped (Alabama, Iowa, and Louisiana) the deduction amounts to more than $2.5 billion and the best-off 20 percent of taxpayers enjoy between 79 and 84 percent of the benefit, while the top 1 percent enjoy between 33 and 38 percent of the benefit. The three states that do cap the deduction (Missouri, Montana, and Oregon) lose less revenue and lose a smaller share of it to those with high-incomes, but even in these states 51 percent of the total benefit goes to the highest-income 20 percent of residents, and only in Oregon does that high-income minority receive less than half of the tax cut. 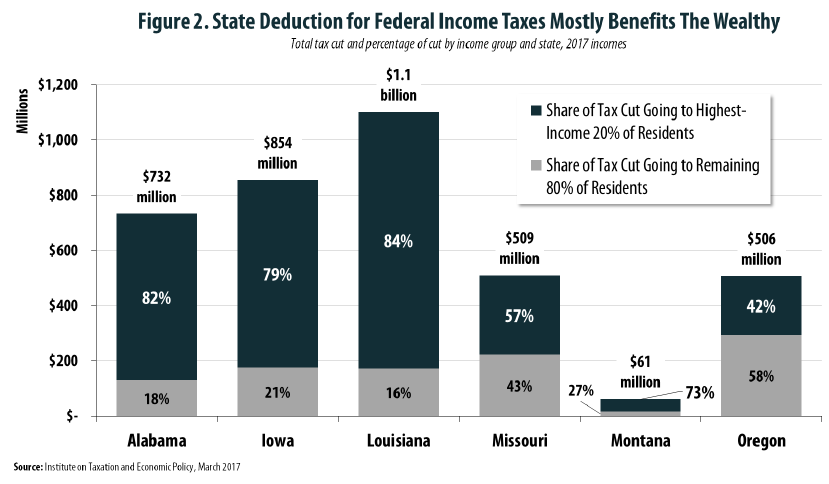 The Opportunity: Closing the Deduction Loophole

States that allow a deduction for federal income taxes allow their tax codes to be undermined by a costly and regressive loophole. The loophole is a major drain on state tax revenues and the price tag yields remarkably little benefit to low-and middle-income families. This tax break also leaves state budgets and taxpayers especially vulnerable to changes in the federal income tax. All six states that offer the deduction can benefit from repealing it, and those that do not currently cap the value of the deduction and phase down its value for residents with very high incomes can at least add such provisions to mitigate these effects.

The current national political climate should not discourage states from making these reforms. Even though upper-income tax cuts at the federal level are under consideration and would reduce the cost of this tax cut for the states that offer it, passively hoping for that small windfall is no substitute for taking action to repeal or limit the deduction. Taking such action is the only way for states to ensure significant needed revenue in the short term and insulate their budgets from the whims of Congress. As budget shortfalls and federal and economic uncertainty mount, elected officials have a real opportunity to improve their fiscal positions in a way that has minimal impact on low-and middle-income families and improves their ability to plan responsibly for the future of their states.