Indiana Governor Mike Pence and the state’s legislative leaders recently announced a budget agreement that, among other things, phases the state’s flat personal income tax rate down from 3.4 percent to 3.23 percent by 2017.[1]  This 5 percent cut in the state’s income tax rate is a scaled-back version of Governor Pence’s campaign pledge to cut the rate to 3.06 percent next year.  While this new agreement is more modest than Governor Pence’s original proposal, its impact on the distribution of Indiana taxes is very similar.  Most of its benefits will flow to the state’s wealthiest households, while one in three of the state’s poorest residents will see no tax cut at all.[2]

Given the uncertainty in economic forecasts for 2017, ITEP used its Microsimulation Tax Model to illustrate the impact that cutting the state’s personal income tax rate to 3.23 percent would have had if implemented in Tax Year 2012—the year for which most Indiana residents just finished filing their income tax returns.  ITEP’s analysis shows that:

These findings are particularly worrisome in light of ITEP’s recent Who Pays? report.[3]  ITEP found that while low-income Indiana households pay little in state income taxes, they face the seventh highest overall state and local tax bill in the country, once sales, excise, and property taxes are taken into account.  Under current law, Indiana’s poorest households pay an average of 12.3 percent of their income in state and local taxes each year, while the state’s most affluent residents pay just 5.4 percent.  If this agreement is signed into law, this lopsided distribution of Indiana’s tax system—ranked ninth worst in the country by ITEP—will be made even worse. 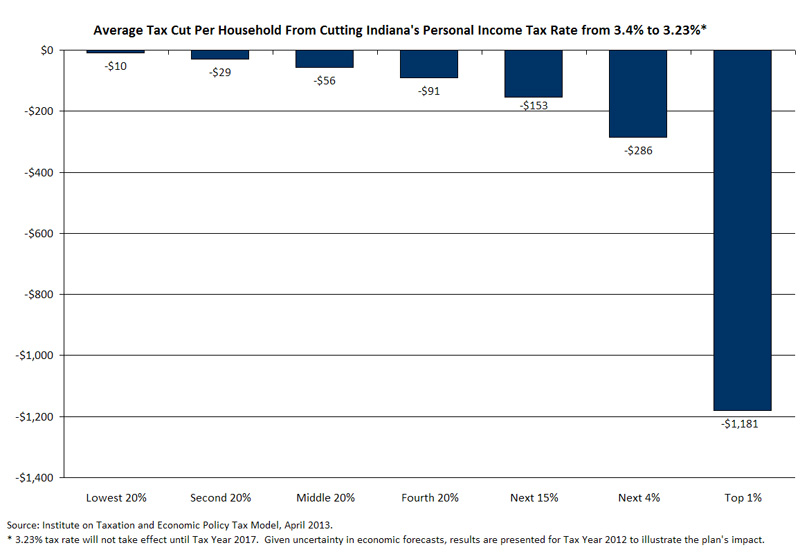 [2] ITEP’s analysis of the Governor’s tax plan can be found at: https://itep.org/itep_reports/2013/04/indiana-senates-income-tax-cut-just-as-lopsided-as-the-governors.php