A Wealth Tax Might Be Easier to Implement than You Think 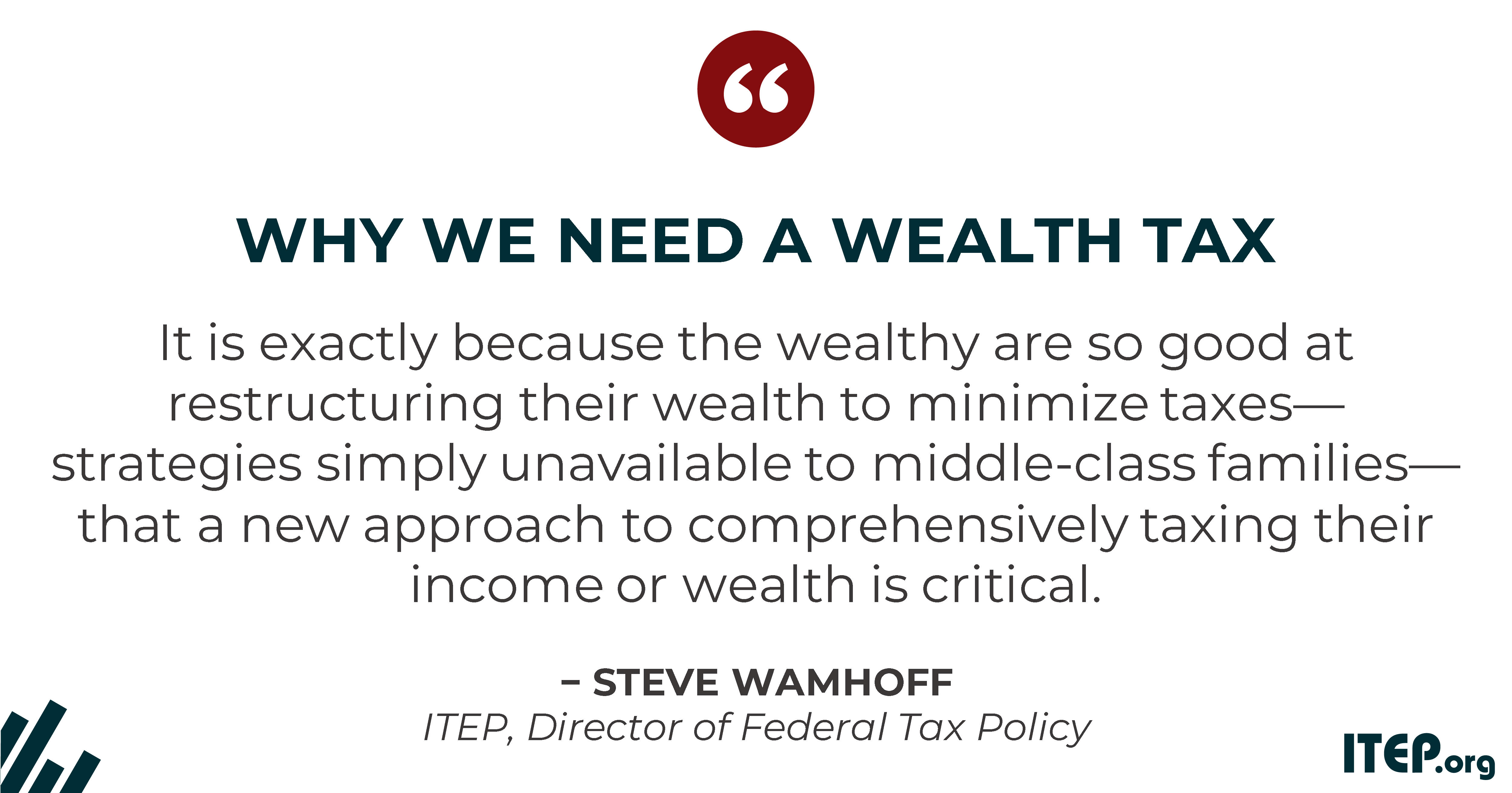 A direct federal tax on wealth, as described in a January report from ITEP and proposed by Sen. Elizabeth Warren, could raise substantial revenue to make public investments, curb rising inequality, and is supported by a large majority of Americans. But would it work? Recent research highlighted in a new academic paper outlines approaches that would make it easier than you might think.

This feasibility of a wealth tax came up during the July 30 Democratic presidential debate with Rep. John Delaney arguing that the idea is unworkable. The ITEP report on this topic already addresses his claims, but it’s worth focusing on his assertion that “the countries that have had it have largely abandoned it because it’s impossible to implement.”

Delaney’s statement is entirely out of context because the handful of countries that tried to implement wealth taxes imposed them on broad groups of people (not just the wealthiest) and allowed exemptions for many different types of assets. This almost surely results in people trying to recharacterize their assets to fit the exemptions.

More importantly, none of those wealth taxes relied on the sort of approaches that have been developed in recent scholarship to solve the biggest implementation problems.

The Purpose and Challenges of a Wealth Tax

At the outset, it is helpful to remember why we need a federal wealth tax and what the challenges are in implementing one.  The nation’s income tax by itself fails to place a sufficient constraint on growing economic inequality. Our income tax simply does not tax all types of income that wealthy people have. If you measure income as an economist would measure it, you would include asset appreciation, even in years when assets are not sold, as income. If you were worth $1 million last year and are worth $2 million this year, you must have had at least $1 million in income. But if your net worth increased because your assets appreciated, the federal income tax does not count that asset appreciation as income. You could own a company that is worth millions and that is rapidly growing, but you could still report very little income to the IRS and therefore pay little in federal income taxes.

One solution is to expand the definition of taxable income to include this type of asset appreciation, for the very wealthy. Proposals for “mark-to-market” taxation would do this. However, supplementing the income tax with a tax directly on wealthy households’ net worth—an annual federal wealth tax—is another compelling approach to address the same problem.

There is a widely acknowledged obstacle to implementing a wealth tax: The IRS has methods of measuring people’s income but measuring net worth (the value of one’s assets) is not something the IRS does as frequently. The estate tax is an exception—it is like a wealth tax that is imposed just once, after a rich person dies. But a wealth tax would be imposed annually, which raises the question: Would the difficulties of valuing assets make the wealth tax impossible to enforce?

The tax code’s answer to this question traditionally has been to say there is no way to know what an asset is worth until it is sold so the IRS simply taxes income generated from the asset sale. If you buy an asset for $5 and sell it for $10, then the asset must have been worth $5 when you bought it and it must have been worth $10 when you sold it. In any event, the profit generated from that sale (the realized capital gain) is taxed as income. On the other hand, if you don’t sell the asset, it is assumed that no one really knows what it’s worth or how much it might have appreciated, so the tax code just acquiesces. This is why the wealth of those at the top can accumulate largely tax-free.

Solutions to the Valuation Problem

But there are strategies to value unsold assets. One approach that scholars have recently focused on is explained in a recent paper by David Gamage of Indiana University Maurer School of Law. It would assume that each asset owned by a wealthy person would appreciate at some standard rate—perhaps based on growth throughout the economy or based on a rate specific to the type of asset—until the asset is sold, at which point the tax calculation for previous years would be corrected, either increased or decreased.

For example, assume a very high net worth household that is subject to a wealth tax purchases an asset for $1 million. This approach would assume that the asset is worth what they paid for it, $1 million, and that its value rises at some standard rate each year the household continues to own the asset. Imagine that, based on the standard growth rate, the asset is assumed to be worth $1.7 million after 10years. But then at the end of the decade, the household sells the asset for $2 million. In this case, the IRS would assume that the asset must have appreciated steadily from $1 million to $2 million over the decade, meaning the asset was worth more each year of the decade than originally estimated, which in turn means that the net worth of the household was higher in each year of the decade than originally estimated. The household would then pay additional wealth tax, plus interest.

The proposal would work the same way in reverse if a household sells an asset for less than its assumed worth based on the standard growth rate. If the standard growth rate assumed that the asset was worth $1.7 million after a decade but the household sold the asset for $1.5 million, that would mean the asset had appreciated less in each year of the decade and that the household overpaid wealth taxes during that period. They would receive a refund of some wealth taxes, with interest.

This approach would leave taxpayers in the same situation they would be in if their assets had been valued perfectly initially and they had paid exactly the right amount of wealth tax each year.

You might be reading this and thinking, “Wait, this is supposed to make implementing a wealth tax easier? It sounds complicated!”

The answer to that is, well, this is complicated, but it would work. Remember that the taxpayers who would be subject to a federal wealth tax or mark-to-market taxation can deal with complexity. These proposals almost always apply only to the very wealthiest people, usually the wealthiest 0.1 percent of Americans. They have accountants and tax lawyers who use software to calculate their tax liability. They are not doing their taxes at the kitchen table the way a middle-class family might.

And let’s keep in mind, the wealthy already engage in mind-boggling complexity when it comes to finding ways to avoid taxes. It is exactly because the wealthy are so good at restructuring their wealth to minimize taxes—strategies simply unavailable to middle-class families—that a new approach to comprehensively taxing their income or wealth is critical.