Read this testimony in PDF.

In recent years, few trends in state fiscal policy have been as pronounced as the drive to generate additional funding for transportation infrastructure in the face of dwindling revenues.  ITEP has studied the erosion of state and federal transportation funding in great detail and I am thankful to have this opportunity to share my organization’s research with the Task Force.

This brief outlines the causes of Louisiana’s infrastructure revenue shortfall and offers recommendations for how the state can achieve “sufficient increased levels of recurring funding to address the transportation backlog in highway and bridge maintenance needs in Louisiana,” as per the Task Force’s mandate.[1]

The following comments offer further detail regarding each of these recommendations. 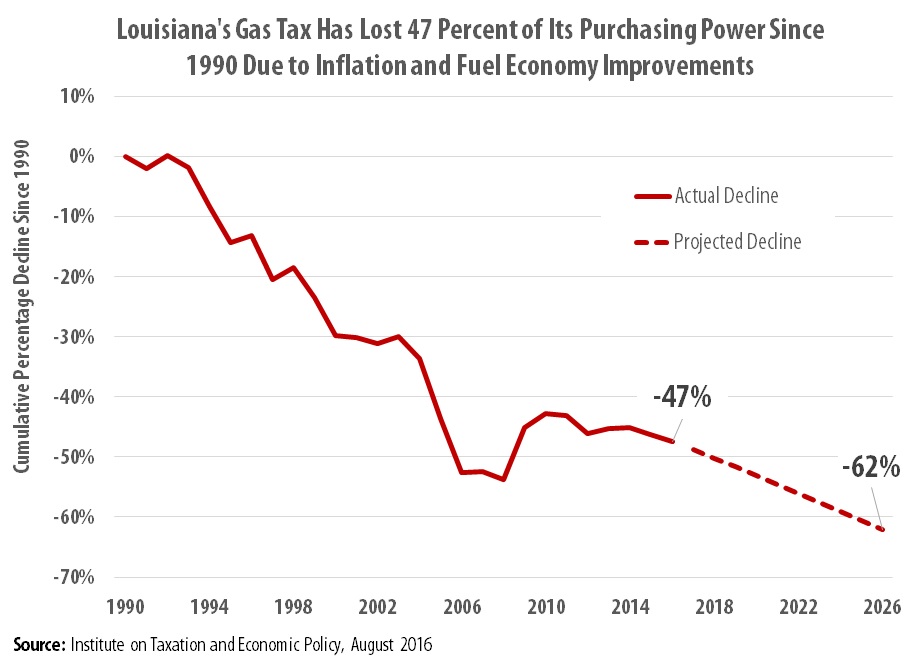 Thank you again for the opportunity to submit these comments.  ITEP staff are happy to provide the Task Force with additional information on this topic upon request.

[3] Institute on Taxation and Economic Policy.  “How Long Has it Been Since Your State Raised Its Gas Tax?”  June 2016.  Available at: https://itep.org/itep_reports/2016/06/how-long-has-it-been-since-your-state-raised-its-gas-tax-1.php.

[4] ITEP analysis of the Federal Highway Administration’s (FHWA) Bid-Price Index (BPI) and National Highway Construction Cost Index (NHCCI) for 1990 to 2015, plus an assumption of 1.0 percent growth in construction costs in 2016.

[5] ITEP analysis of data from the FHWA and projections from the Energy Information Administration (EIA).  These figures refer to the actual on-road performance of all light duty vehicles in operation in a given year.

[7] Institute on Taxation and Economic Policy.  “Most Americans Live in States with Variable-Rate Gas Taxes.”  February 2016.  Available at: https://itep.org/itep_reports/2016/02/most-americans-live-in-states-with-variable-rate-gas-taxes-2.php

[8] These figures refer to the actual on-road performance of all light duty vehicles in operation in a given year.  Data from 2006 to 2014 come from the FHWA while 2015 to 2026 projections are from the EIA’s 2016 Annual Energy Outlook.