Charitable, Property Tax, and Mortgage Interest Deductions Would Be Wiped Out for Two-Thirds of Current Claimants Under Congressional Tax Plans

In the ongoing debate over major federal tax legislation, there is significant focus on how House and Senate bills would eliminate the deduction for state income tax payments and cap the deduction for property taxes at $10,000 per year. At the same time, tax writers have retained deductions for charitable gifts and mortgage interest with what appear to be comparatively minor changes, at least at first glance.

But a new analysis produced using the ITEP Microsimulation Tax Model reveals that Americans’ use of these three deductions would be dramatically curtailed by the House and Senate tax bills, likely to a far greater extent than most people realize.

While one of the debate’s dominant narratives—that repeal of the state income tax deduction is being used as a tool to make “blue” states like California and New York pay for tax cuts in other parts of the country—does have merit, it is also incomplete. Congressional Republicans in most states may feel that it is politically “safer” to go after the state income tax deduction directly, but an indirect consequence of this decision is that more broadly popular deductions, such as for donations to churches and local nonprofits and mortgage interest, are being dramatically cut as well. 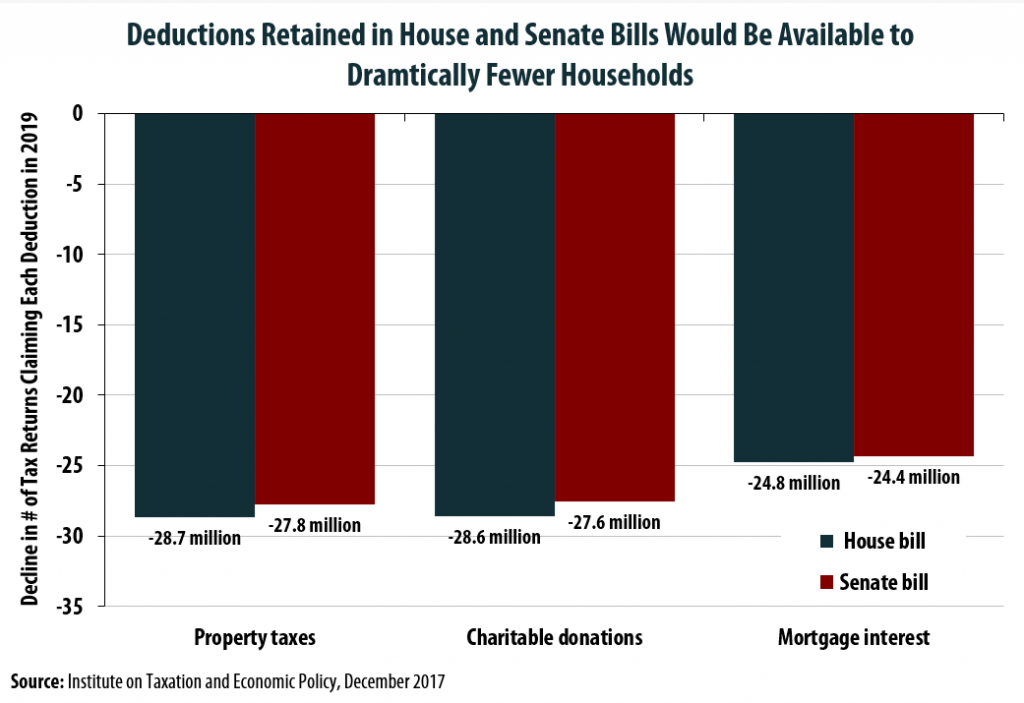 The analysis includes both national figures and findings for all 50 states.  Among its findings:

The House and Senate’s tax plans would have significant impacts on all of these deductions. But the rushed nature of the debate, combined with the fact that many of those changes would happen indirectly—because of the elimination of the state income tax deduction or increases to the standard deduction, for instance—means that many of those impacts are not well understood by ordinary Americans or perhaps even their representatives in Congress.

As ITEP has argued before, there are good reasons to consider reforming itemized deductions to improve their effectiveness or fairness. But the House and Senate’s approach to that task leave much to be desired.

View 50-state data in Excel or PDF for all three deductions.

Or view data for a specific deduction: