Given the challenging fiscal climate facing Kansas, the proposed income tax plan should be thought of not simply as a tax cut but as a tax swap. News reports confirm our expectation that revenues from income taxes would be at least partially replaced by sales and property taxes under the Governor’s plan. The graphic below illustrates the costs of such a swap under varying scenarios. Outright repeal of the income tax would create a $2.6 billion hole in the state’s budget if implemented in 2011.

The graph below shows how Kansas taxpayers at different income levels would be affected by a tax swap that makes up a specified percentage of the state revenue loss through sales tax hikes. (While this loss could also be made up through property tax hikes, the property tax is a less obvious revenue-raising vehicle for the state because it’s primarily a local tax.) 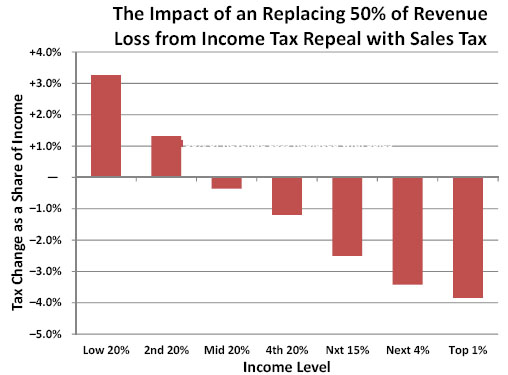