American consumers are keenly aware of the price of gasoline, but uninformed about what drives that price. When asked about the federal gas tax, for example, six in ten Americans said the tax rate goes up every year.1 In reality, the federal gas tax hasn’t budged from its 18.4 cent rate in almost twenty years, and roughly half the states haven’t seen their gas tax rates change in a decade or more.2 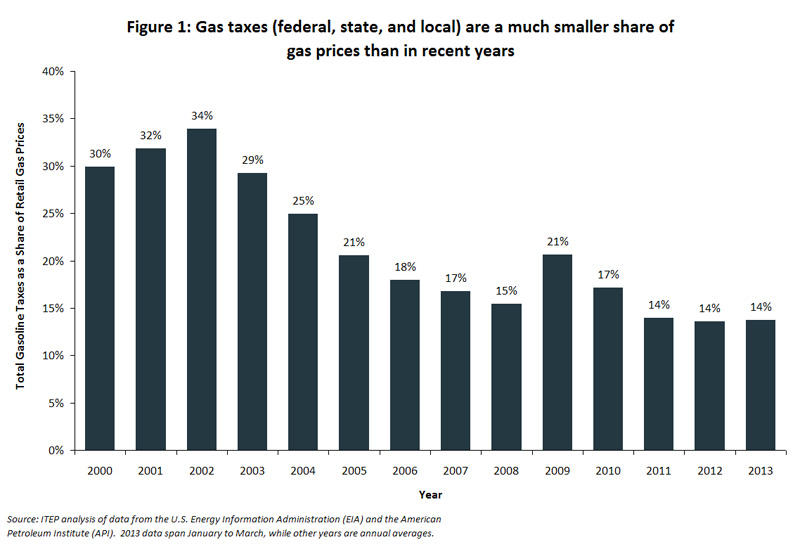 Rather than being driven by taxes, higher gas prices are almost entirely attributable to the rise in the price of crude oil—the main ingredient that goes into making gasoline.  Growing worldwide demand for gasoline, oil industry mergers, OPEC’s supply decisions, and a host of other factors have pushed crude oil prices upward, and gasoline prices along with them.3   Meanwhile, refiners’ decisions to keep less gas on hand in their inventories, as well as a growing reliance on imported gasoline, have allowed for the wild up-and-down swings in gas prices with which American drivers are familiar. 4 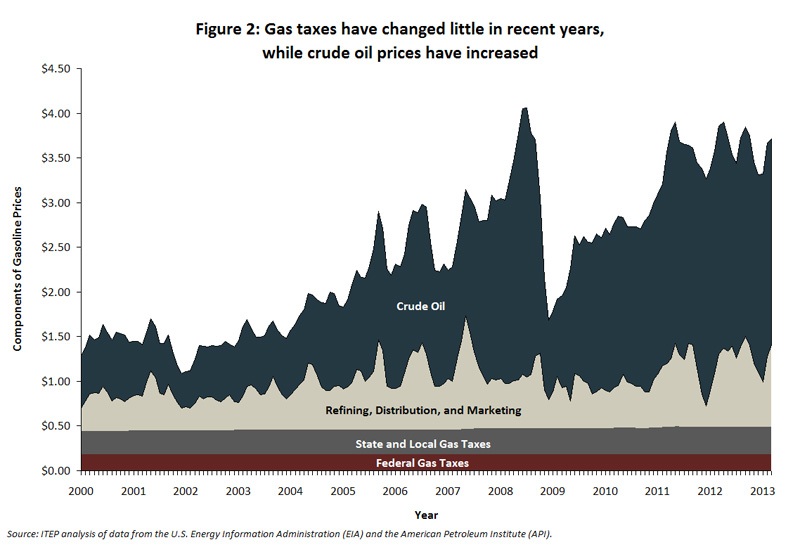 Gas taxes, meanwhile, have had virtually no impact on the increasingly high and volatile price of gasoline.  The average combined state and local gas tax has increased by less than 5 cents per gallon since 2000, while the federal gas tax has remained completely unchanged over that period.5   Growth in crude oil prices by contrast, has tacked an additional $1.73 onto the price of each gallon of gasoline—rising from a cost of 61 cents per gallon of gas to $2.34 per gallon, as Figure 3 below shows.

Enacting increases in federal and state gas taxes—whose purchasing power has been decimated by construction cost growth and the switch to more fuel-efficient cars—would bring with it significant benefits in the form of funding for a safer and more efficient transportation system.6   At a time when American drivers waste over 5 billion hours and nearly 3 billion gallons of burnt fuel stuck in traffic each year, the need for such investments could not be more clear.7

While the stubbornly high price of gas has made it politically difficult for lawmakers to propose raising the gas tax, voters should be aware that the gas tax is not to blame for those high prices.  Continuing to delay raising the gas tax because of crude oil price growth will bring with it enormous costs for American infrastructure and the hundreds of millions of people that use it every day.

6 For an analysis of the impact of inflation on state and federal gas taxes, see: https://itep.org/bettergastax/