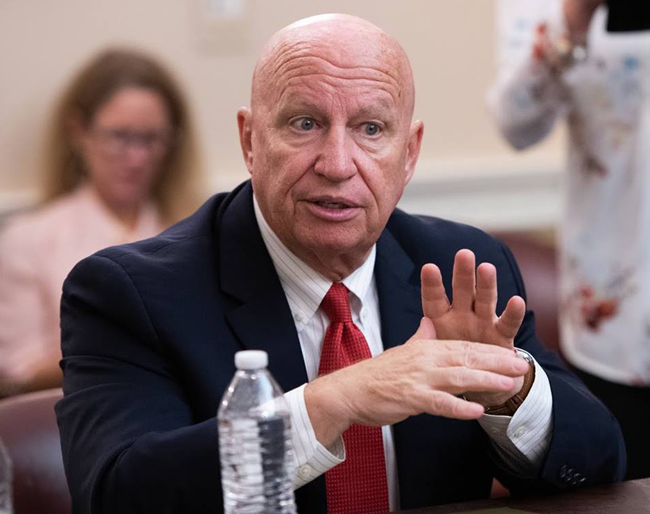 By Peter Della-Rocca and Richard Phillips

GOP leaders abandoned running on the 2017 tax act during the mid-term election cycle after realizing it was not a winning political strategy, but that doesn’t mean their zeal for pursuing unpopular tax cuts has subsided.

Outgoing Ways and Means Chairman Rep. Kevin Brady (R-TX) introduced legislation on Dec. 10th that includes $80 billion in tax cuts that are unpaid for and largely benefit the wealthy. The bill would, among its numerous provisions, expand retirement and education savings programs that offer very little value to low-income families, delay the Health Insurance Tax for an additional two years, and delay the Medical Device Tax for an additional five years.

An earlier version of the bill proposed in November included the so-called tax extenders, a group of temporary tax cuts that are renewed year after year, and numerous additional provisions that Rep. Brady pitched as having bipartisan support.

The Dec. 10th draft of the legislation staked out a position notably to the right of the earlier versions, dropping the tax extenders and adding more distinctly partisan provisions. While garnering the support of the right flank might brighten the bill’s prospects in the lame-duck House, attaining the 60 votes necessary to pass the Senate will be difficult. This is especially true because Senate Democrats need only wait until January to work with a new Democratic majority in the House. This bill is a messaging vehicle, staking out a conservative position in the final days of this Congress.

The latest draft of the bill, released Dec. 17th, would make permanent a popular railroad track maintenance tax credit and would cause a biodiesel credit to phase out over time rather than expire. These two provisions would bring the total cost of the legislation up to $98 billion. The more politically toxic of the extenders, such as the provision on coal, that dissuaded some Republicans from supporting an earlier version of the bill, are still absent, although these changes alone are unlikely to radically change its prospects for enactment.

The bill’s delay of the Health Insurance Tax and Medical Device Tax continues a long-running Republican strategy of chipping away at the Affordable Care Act by continuously pushing back its revenue sources. The aggregate sum the Health Insurance Tax collections was set to grow over time, rising from $8 billion in 2014 to $14.3 billion by 2018 and increasing in tandem with premiums thereafter. The Medical device tax, meanwhile, was estimated to raise $29 billion over ten years, and $1.7 billion in 2013 alone.

Lawmakers enacted these taxes with the idea that industries benefiting from the ACA’s expansion of health coverage should chip in to pay some of the costs. The medical device industry’s profits increased by nearly $3 billion the year the healthcare law went into effect.

Neither medical device manufacturers nor health insurance companies are in financial trouble, and the economic cost associated with the two aforementioned taxes is small. The Congressional Research services estimates a decrease in output and jobs in the medical device industry of just 0.2 percent as a result of the Medical Device tax and an increase in annual premiums of between 2 percent and 2.5 percent associated with the Health Insurance Tax.

The new bill would make two changes to 529 accounts: broaden the definition of qualified education expenses to include costs associated with apprenticeships, homeschooling, and student loan payments and allow accounts to be opened before the beneficiary is born. Because 529 accounts only benefit families who can afford to save, and because they offer tax deductions rather than credits, they largely serve wealthy families. Loosening restrictions on how distributions from 529 accounts can be used will only provide a windfall for families who, for the most part, could have set aside money for education with or without a tax break.

The retirement savings portion of the bill includes a number of small changes that have appeared in previous Republican proposals. Of those, more generous exemptions from minimum distribution requirements, and diminished insurance payments for certain charities, would likely have the largest revenue impact. It would also exempt accountholders with a balance below a specified minimum from distribution requirements, and would decrease premiums for Cooperative and Small Employer Charity insurance plans offered through the Pension Benefit Guaranty Corporation. When these measures were included in a previous retirement savings bill, the Joint Committee on Taxation estimated that they would cost $6.23 billion and $1.38 billion respectively in lost revenue over ten years.

Like the changes to 529 accounts, the retirement savings portion of the bill would largely benefit wealthy families who can afford to save and who fall into higher tax brackets where deductions are especially valuable.

Rep. Brady’s latest bill may set the stage for a tax package in the next Congress. Such a package will likely include a revival of the so-called tax extenders, removal of provisions especially offensive to Democrats, and potentially include additional Republican concessions. Even with these changes, such tax legislation would eschew genuine tax reform in favor of more deficit-financed tax cuts to those already lavished on wealthy families and corporations with 2017’s Tax Cuts and Jobs Act. Congress should reject this approach and end the destructive tradition of passing special interest driven tax legislation year after year.