The latest news on the GOP tax bill is that, in order to secure the vote of Senator Marco Rubio, Republican leaders have agreed to expand the child tax credit — but only by a fraction of the amount that Rubio initially demanded. The table below illustrates how the “compromise” being reported would help 7 million fewer families than the compromise Rubio initially called for.

Before approving the Senate bill on December 2, Republicans had rejected an amendment from Senator Rubio and Senator Mike Lee to increase the portion of the child tax credit that would be refundable under the bill (which is the portion of the credit that is available to low-income families) from $1,100 per child to $2,000 per child. Now Republicans leaders are reported to have agreed to increase the refundable portion from $1,100 to $1,400.

But the Rubio-Lee amendment had other components that are apparently not part of the final bill — at least based on what’s been reported so far. Their amendment would have also made the refundable portion of the credit equal to 15.3 percent of earnings (instead of 15 percent under the Senate bill) starting with the first dollar earned (instead of starting with earnings exceeding the first $2,500 earned, as under the Senate bill).

It is reported that part of the cost of the expansion of the child tax credit in the final bill is offset by keeping the eligibility age at 16 years and younger. The bill passed in the Senate on December 2 would have increased it to 17 years and younger. If these reports are correct, this means that about three and a half million households will get less help under the final bill than bill the December 2 bill because they include 17-year-olds who would have qualified for the credit. As ITEP has already explained, the tax plan would hit families older teenagers and college students particularly hard. 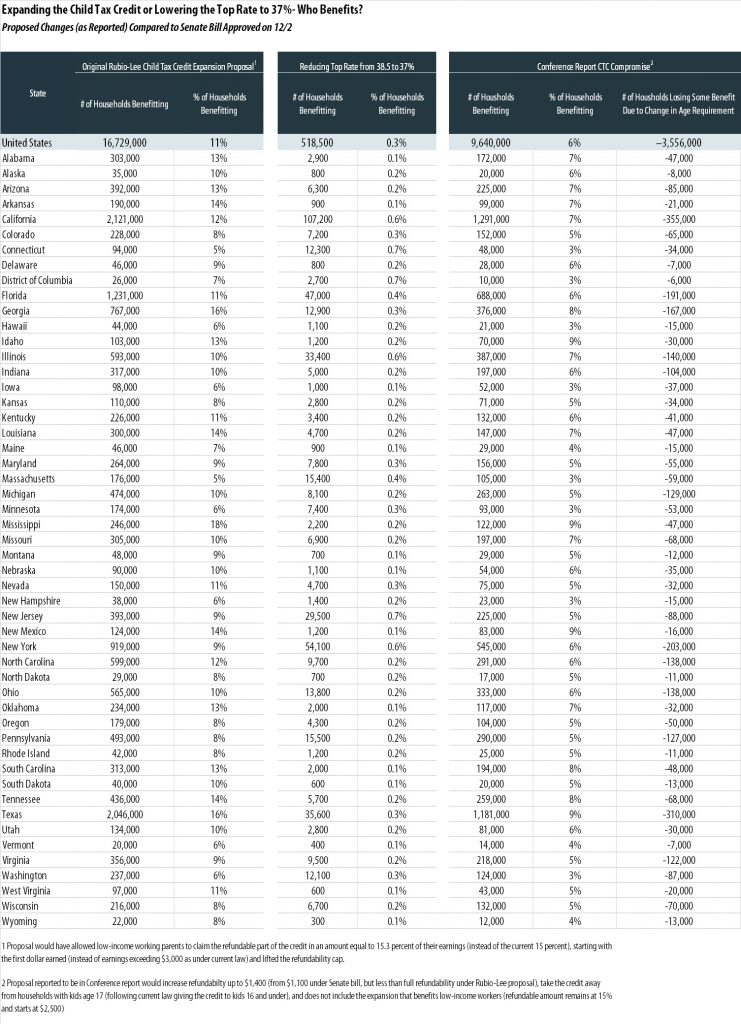